Cloak-and-Dagger in All Its Charm

There weren’t a lot of gun battles during the cold war, and the targets were judiciously selected. “Only the ones in uniform,” one C.I.A. agent says to another as they crouch on a Berlin rooftop in 1954 and fire shots at enemies a building away. The K.G.B. man among them is off limits. “They don’t shoot at us,” the agent says, “we don’t shoot at them.” 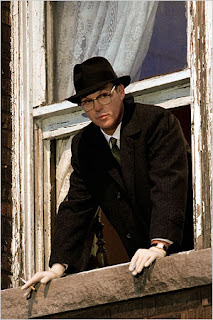 Jan Thijs/TNT
Michael Keaton works for the C.I.A. in "The Company," a mini-series beginning on Sunday on TNT.

“The Company,” a mini-series beginning this Sunday on TNT, is a spicy drama about the Central Intelligence Agency in the days when the lines of battle were clearly drawn, and the enemy played by the same rules and was easy to spot. (The spies wore black, the East Germans wore gray.)

It wasn’t exactly a time of unmitigated triumph. The series, based on the semi-fictional thriller by Robert Littell, spans some of the most embarrassing espionage disasters of all time, including Kim Philby, the double agent in MI6, and the Bay of Pigs fiasco. But in its heyday, the C.I.A. was the emblem of American certitude, when arrogance was more of an issue than ignorance, and zeal, however misguided, loomed larger than incompetence and interagency paper shuffling.

“The Company” is a look back in sorrow, but also in muffled fondness, at an era that by post-9/11 standards, seems enviably unambiguous and navigable. Two years ago “Good Night, and Good Luck,” George Clooney’s black-and-white tribute to Edward R. Murrow, tapped into viewers’ appetite for moral clarity and unfiltered cigarettes. More recently, Robert De Niro tried to capture the WASP ethos at the marrow of postwar American power in “The Good Shepherd.” Sam Mendes is working with Kate Winslet and Leonardo DiCaprio on a film version of Richard Yates’s 1961 novel about suburban angst, “Revolutionary Road.”

It’s not a coincidence that so many writers and directors are fascinated by the era of the Automat, the space race and Bob Newhart comedy albums. When the present is uncertain, and the future looks bleak, the past holds so much promise.

Television is on a similar retro wavelength. “The Company” takes the same lovingly reproachful look at cold war antics that “Mad Men,” on AMC, brings to the Madison Avenue rat race.

Centered on advertising executives in the 1960s, “Mad Men” is a darkly lighted montage of martini lunches, smoke-filled rooms, starched white shirts, illicit affairs and well-trained children who at the dinner table were seen and not heard.

TNT’s mini-series is a darkly lighted montage of martini lunches, smoke-filled rooms, starched white shirts, illicit affairs and well-trained agents who in a bugged room were heard and not seen.

Both series second-guess the errors of those times — the sexism and racism of Madison Avenue, the betrayals and extralegal activities of Cockroach Alley, as the C.I.A.’s first headquarters were nicknamed — while savoring their now-forbidden pleasures.

Chris O’Donnell plays Jack McAuliffe, a recent Yale graduate and oarsman, who, along with his classmate and best friend, Leo Kritzky (Alessandro Nivola), is tapped for the C.I.A. by his coach. A third friend, Yevgeny Tsipin (Rory Cochrane), is the son of a Russian diplomat who returns to Moscow after Yale and is also recruited for cloak-and-dagger work, only by the K.G.B.

But the real star is Alfred Molina, who plays Harvey Torriti, a crabby, overweight, obsessive field agent code-named the Sorcerer, who becomes Jack’s mentor in Berlin. Torriti is the type who keeps slivovitz in the office water cooler. (“I drink what my medical report says is a toxic level of alcohol,” he says.) He is convinced that there is a high-level British intelligence mole who is privy to top-secret C.I.A. information and is feeding it to Moscow.

Much of the action in “The Company” is set in the same shadowy netherworld that was so evocatively portrayed in “Tinker, Tailor, Soldier, Spy” and “Smiley’s People,” the BBC series based on John le Carré novels. (Philby, who in his day betrayed le Carré along with countless other British agents, was a model for Smiley’s nemesis, Bill Haydon.)

This spy drama is not as dense and psychologically intricate, but it has compensations, most notably the placement of fictional characters like McAuliffe and Torriti alongside real-life figures like Angleton and Philby, and inside real-life crises like the 1956 Hungarian uprising.

The historical events are real, but some of the re-creations of the period are overly romanticized, particularly life in the Soviet Union.

Yevgeny is recruited by a K.G.B. general known by the code name Starik ( Ulrich Thomsen), a true believer who woos Yevgeny at his summer dacha. That idyllic, sun-dappled estate is modeled on the Russian director Nikita Mikhalkov’s more lyrical country scenes — more Chekhov than Cheka.

Yevgeny falls in love with a young Jewish woman, whose parents were deported to Siberia, and she appears to live alone in a large Moscow apartment with a private telephone in her bedroom, which in 1951 was out of the question for anyone, let alone “rootless cosmopolitans,” as Jews were called in Stalin’s time. Those and other slips are minor, however.

History has shown that neither the K.G.B. nor the C.I.A. was nearly as powerful or effective as it once seemed. “The Company” provides a welcome break from that reality; it’s an escape into the bracing, deluded days before the cold war ended, and the war on terror took its place.