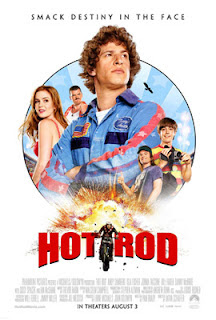 The new stuntman comedy "Hot Rod" should come with a warning: Anyone above the age of 42 is not going to get it. Chock-full of references to bad teen movies from the '80s and saturated with sarcasm, "Hot Rod" is a cheekily fun sendup of Gen X iconography.

"Napoleon Dynamite" fans are sure to like Rod Kimble, the moronic and talentless Evel Knievel-wannabe played by "Saturday Night Live" regular Andy Samberg. Sporting a fake mustache, coveralls and cape as he attempts, and fails, to launch his moped over a milk truck, then a swimming pool and, finally, a stretch of 15 school buses, Kimble is on a mission to show his worth to a disapproving stepfather and also to get the girl. 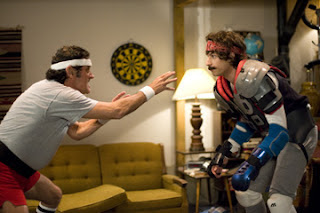 That girl is Denise, played by Isla Fisher. Unfortunately, Fisher isn't allowed to demonstrate the comedic chops she so handily displayed as the redheaded bombshell in "Wedding Crashers." She's merely eye candy in what is clearly a star vehicle for Samberg, who plays the part of an affable, if emotionally unevolved, loser with a sort of buff but nerdy sex appeal.

A lot of the comedy in "Hot Rod" will be meaningless, campy fun for teen viewers but in-jokes for Xers, who'll test their powers of recall and cringe with recognition when they hear songs and watch scene reenactments from "The Karate Kid," "Flashdance" and "Footloose," the most notable being an outrageously drawn-out sequence that has Kimble back-lighted and dancing wildly in a forest, then pommel horsing on a log, then falling -- endlessly -- down a wooded slope. 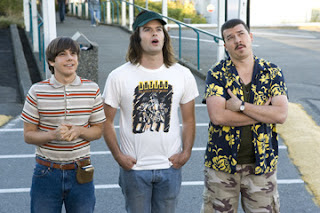 Much of the humor in "Hot Rod" consists of "Jackass"-caliber gags that often result in bodily injury. At least the gags hang together as a viable plot. When Kimble vomits on Denise after nearly drowning in a kiddie pool, then plummets into an RV at the tail end of a street luge run, then flies through the air after a hit from a friend's van, it all has a purpose. It's training for the big jump, which Kimble is "too legit to quit," he tells Denise, complete with M.C. Hammer hand signs.

Executive produced by "SNL" star Will Ferrell and directed by Samberg's childhood pal and "SNL" writer Akiva Schaffer, "Hot Rod" was written by Pam Brady, an Emmy-nominated writer-producer for the animated comedy series "South Park." Together, they've managed to stitch together a funny and irreverent movie that's likely to create the same sort of adoring, if temporary, fan base as the movies it spoofs. My guess is it won't be long before the red Team Rod T-shirts that Kimble's team wears in the film begin showing up in low-rent trinket shops, à la Vote for Pedro.