Gwen Knapp: Alone at the Top He hits blast at home, among the faithful

This was where it had to happen, in his haven at China Basin, among the true believers. Barry Bonds launched a ball into history Tuesday night, sending the only 756th home run ever hit by a major-leaguer into the center-field bleachers and setting off a celebration more rapturous than anyone could have expected.

Rejected by large portions of the baseball-loving public as a chemically enhanced fraud, Bonds found himself enveloped in an adoring crowd of Giants fans, his family and teammates, plus applauding opponents and, most heartwarmingly, an aristocracy of sluggers.

Among the top seven home-run hitters of all time, the four who could be present, in some form or another, came together to celebrate the moment. Frank Robinson attended as a representative of Major League Baseball, and 76-year-old Willie Mays emerged from the warmth of a suite to join his godson on the field.

Then came the deposed king, Henry Aaron, whose face appeared on the park's enormous scoreboard, offering videotaped congratulations full of warmth and goodwill. Aaron had said long ago that he would not try to be in the park when Bonds broke the record. His statements, though very limited, were widely interpreted as a rebuke to Bonds, who has been linked to performance-enhancing drugs and remains under investigation by the federal government and Major League Baseball. 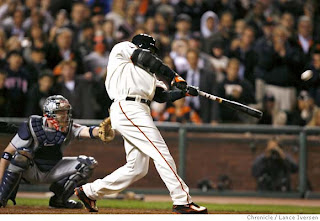 But when the time came, Aaron passed the torch with all the dignity he displayed when he overtook Babe Ruth 33 years ago.

"I move over now and offer my best wishes to Barry and his family on this historical achievement," Aaron said. "My hope today, as it was on that April evening in 1974, is that the achievement of this record will inspire others to chase their own dreams."

The audience cheered Aaron vigorously, drowning out almost half of his message. "It meant everything," Bonds said of the video. "It meant absolutely everything."

He took Aaron's crown at 8:51 p.m., hitting a 3-2 pitch from Washington Nationals lefthander Mike Bacsik in the fifth inning, just after the packed house of 43,154 started the familiar chant of "Barry, Barry, Barry" in earnest for the first time all night.

Bonds touched home plate and pointed to the sky, a gesture that used to punctuate his home-run trots regularly but has been noticeably absent this season. Later, as he stood next to Mays, Bonds pointed to the sky one more time, adding a final name to the list of people he was thanking. "My father," he said, doubling over as he held his arm aloft. Bobby Bonds, a major-league star during Barry's youth, died of cancer four years ago.

During the 10-minute celebratory delay, several Nationals remained on the field, quietly applauding Bonds. When Bacsik finally returned to the mound, he tipped his cap toward the Giants dugout.

A 29-year-old who spent the last two seasons in the minor leagues, Bacsik is the son and namesake of a former Texas Ranger who pitched to Aaron in 1976, when, like Bonds on Tuesday night, he had 755 home runs to his name. The younger Bacsik had said the day before that he could live with becoming the first major-league pitcher to allow No. 756. 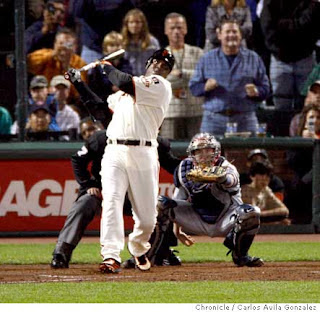 "Me and Al Downing can do card shows together and sign famous autographs for being the guy," he told reporters Monday, referring to the pitcher who allowed Aaron's 715th home run, which took him past Ruth.

With his historic swing, Bonds unified both significant home-run records for the first time in 46 years, since Roger Maris hit 61 to replace Ruth as the single-season king.

Bonds hit 73 homers in 2001, becoming a prodigious slugger 15 years into his career. "There are some things I can't understand right now," he said at the time. "The balls I used to line off the wall are lining out (of the park). I can't tell you why. Call God. Ask him."

Since then, a laboratory in Burlingame and a personal trainer who did time for steroid dealing have been identified as the alleged sources of his transformation, putting Bonds in a national crucible of hostility and the entire sport under scrutiny it should have faced years ago.

Commissioner Bud Selig, who infamously acknowledged 755 on Saturday night in San Diego with his hands tucked in his pockets and a yawn on his face, was absent for the record-breaker. Robinson was one of his surrogates.

The commissioner did place a call to Bonds and issued a statement of congratulations, which referenced the MLB investigation by saying: "While the issues which have swirled around this record will continue to work themselves toward resolution, today is a day for congratulations on a truly remarkable achievement."

In several gatherings with the media since Bonds drew close to Aaron, Selig had avoided uttering the slugger's name aloud. But his conflicted reactions didn't extend to the profit motive.

On its Web site, MLB had already arranged to sell apparel commemorating No. 756. The T-shirts and caps, unlike the commissioner, actually say the words "Barry Bonds," and at $19.99-$29.99 a pop, they will repeat the name as often as you want. 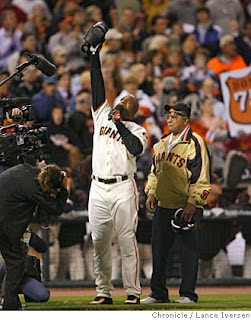 Barry Bonds, with his godfather, Willie Mays, alongside, tears up as he talks about his late father, Bobby, while addressing the crowd at AT&T Park. Chronicle photo by Lance Iversen

He is the king now, at the pinnacle all by himself. How he got there, and how baseball will change because of the dirty secrets that he embodied and inadvertently exposed, will be a question for the ages. On Tuesday night, the exhilaration of the crowd, and of the moment, masked the uncertainty and doubts of the world outside Bonds' happy bubble by the bay.

Does he belong alongside the disgraced Pete Rose, the banished Shoeless Joe Jackson and the reclusive Mark McGwire? Will Bonds' connections to doping become a footnote rather than an impediment to the Hall of Fame? What does it all mean?

In the words of the new home-run king: Call God. Ask him.

This article appeared on page A - 1 of the San Francisco Chronicle
Posted by jtf at 12:29 PM