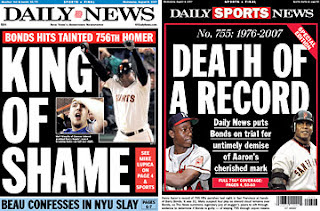 It's a tainted celebration as Bonds hits homer No. 756

Barry Bonds hit No. 756 last night, hit it against a former Met named Mike Bacsik, hit it in the one place in this world, San Francisco, where he is cheered more than booed and loved more than hated.

He hit No. 756 over a Bank of America sign in AT&T Park, the official capital of Barry Bonds, where all who cheer him seem to believe he passed Henry Aaron and became the all-time home run king of baseball without the help of enough performance-enhancing drugs to keep a battleship afloat.

Bonds finally passed Aaron at the age of 43, did it looking like some bloated version of the sleek and splendid talent he was when he was young. It does not change who he is or how he got here.
There has never been a sports moment quite like this, never a record broken under circumstances such as these, never a more polarizing star than this in all of sports history.

This is No. 756 but with a bullet, from a ballplayer who hit 292 home runs over the first 10 years of his major-league career and now has hit 464 since.

Bonds finally stops chasing Aaron now, all this time after Aaron stopped chasing Babe Ruth in old Fulton County Stadium in Atlanta in April of 1974. Bigots were after Aaron in those days.

The United States government is after Bonds. Why? Because the government clearly thinks Bonds lied in front of a grand jury once when he said he never knowingly used steroids.

A ball hit off the 29-year-old lefthander Bacsik - he goes into history with Bonds the way an old Yankee went in with Aaron the night Aaron hit No.715 - does not change the fact that Bonds' former personal trainer, Greg Anderson, sits in a jail cell because he refuses to answer questions from the feds about the new home-run king of baseball.

Bonds passes Aaron in San Francisco last night at a time when you can go into a bookstore and read about the laundry list of performance-enhancing drugs from the authors of "Game of Shadows," Mark Fainaru-Wada and Lance Williams.

Ask yourself a question now that he has the record: If Fainaru-Wada and Williams made it all up, if they have told all these terrible and slanderous lies about Barry Bonds, why hasn't he sued them all the way into that famous McCovey Cove out beyond the ballpark he practically built for the Giants himself in San Francisco?

Ask yourself why his trainer would spend month after month in a jail cell if he has nothing to hide.

If you don't think they made it up in that book, and it sure would be a lot to make up, then you think what Bonds did is all right because a lot of other guys were doing it along with him.
"I ain't public enemy No. 1," Bonds said to me once, a long time ago, just the two of us sitting in the visitors' clubhouse at Shea Stadium for a magazine interview.

Nobody is saying he is public enemy No. 1 now. Or that he is the only one whose body grew along with his home-run totals over the last decade in baseball. He is just the best one. He was the best all-around player in the game, a Hall of Fame combination of speed and power. It wasn't enough for him.

He needed to be bigger, in all ways. He has made his history now. How he is judged by it is another matter altogether.

You don't have to believe he took everything from female fertility drugs to human growth hormones as his body grew the way it did, got him to 73 home runs in a season at the age of 37, on his way to 756 last night. I do.

Bonds was always going to hit a lot of home runs, for a long time, because he is one of the great talents to come along in 50 years in baseball. He was never going to pass Aaron without help. Two-hundred-ninety-two home runs in his first 10 years, 756 now. Go figure.

"I'll tell you something," Bonds said to me that day in Shea, at a time in his career when he had done nothing to indicate he would hit more home runs someday than his godfather, Willie Mays, or Ruth, or Aaron. "At this stage in my life, in my career, I'm more comfortable with myself than I've ever been. I'm a very happy person, except when I'm in a slump. I know the truth about myself."

He knew the truth about himself then. And he knows the truth about himself now. He knows how he got bigger, and stronger, and showed even more bat speed than he had when he was young. Bonds says that steroids don't hit a baseball for you. Maybe he can explain why he looks the way he does now and his numbers look the way they do after the first 10 years he had in baseball.

"The only thing I ever used was chewing gum," Aaron said once to a friend of mine.

The most Aaron ever hit in a season was 47 home runs. He did what he did at 6 feet and 180 pounds. Look at him. Look at Bonds. You cheer Bonds if you want to. Maybe the real reason Aaron wasn't there last night to stand next to Bonds was this: Somebody as big as Aaron should never look small.