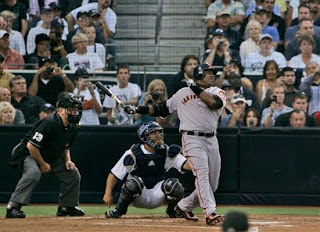 Barry Bonds blasts his 755th career home run off Clay Hensley, of the San Diego Padres, in the second inning of their baseball game in San Diego, Saturday, Aug.4, 2007.

Any moment/minute/day/hour/week/month/year/decade/millennium now, the most joyless pursuit of a major American sports record will conclude. Barry Bonds will have hit more home runs than any major league baseball player in history.

But hitting the most homers doesn't necessarily make someone the Home Run King. That's where you and I come in. Ain't nobody gonna be crowned King unless we say so.

Just so you know, Ned Williamson took aim at a right-field fence at Lake Front Park that was 196 feet from home plate. The year before, when balls hit over that fence were ground-rule doubles, he had a record 49 two-baggers.

So when it comes to home runs, all conditions are not created equal.

The modern home run story starts with Ruth. This is beyond dispute. Until Ruth, many old-line baseball purists thought the home run was a show-off gesture, antithetical to the purpose of "real" baseball. Among those True Believers was Ty Cobb, who, according to legend, decided to show there was no great trick to hitting homers by announcing in advance on May 5, 1925, that he was going for homers that day, and who proceeded to hit three. Makes for a nice story, anyway. 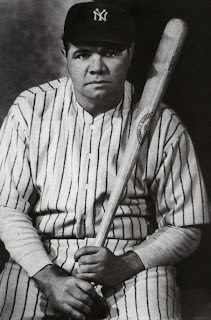 Ty was certainly entitled to his beliefs, but the fact is that both guys and gals dug the long ball, and that The Babe was the first great practitioner of the art. Serious baseball historians will forever debate the whys and wherefores of the dead ball vs. the live ball and whether the binding of the baseball did or did not change significantly in 1920 (it's hard to believe it didn't) in order to make the ball, yes, "livelier," and I'll leave that to the true diamond scholars. Just let the record show that Ruth increased his own season home run record from 29 to 54, and baseball has never looked back.

The Babe's home park in those days was the Polo Grounds, which had a unique horsehoe configuration. Ruth took aim at a right-field foul pole at 257 feet (it was 279 to left, but the fence angled out sharply, and by the time you got to dead center the center fielder was stationed in a different hemisphere). I'm sure the Bambino hit a few cheapies to right. I'm also sure he hit a few 450-foot outs in a ballpark where the dead-center-field fence was listed as far as 483 feet from home plate, and never listed as less than 475.

In 1923, the Yankees constructed a new ballpark in the Bronx. No fools, they, the park looked as if Babe had been asked to design it. The right-field fence was set at 296 feet. At a comparable spot in right-center where Fenway Park goes to 380, the Yankee Stadium distance was 344, with a 4-foot fence. Right field in the old Yankee Stadium -- it was reconfigured for the 1976 season -- was a home run haven built for the personal swatting pleasure of Babe Ruth.

Left field, meanwhile, was a daunting proposition for righthanded batters. It was only 301 down the line, but it fell off sharply, and among the signs for righthanded power hitters to ponder were 457 to left-center and 461 to straightaway center. There were three monuments located on the field and they seldom came into any game discussion. You can certainly forgive Joe DiMaggio for wishing he'd been born lefthanded.

Everything in sports, and life itself, is always contextual, so let's put Babe Ruth into context. In the prime of his career, Ruth twice hit more home runs than every other team. He did it in 1920 and 1927. He was a colossus. He was really and truly establishing new concepts. There was baseball Before Babe and baseball After Babe. This is true of no other baseball player, perhaps of no other athlete (I'll listen with a very sympathetic ear to pleas for Bobby Orr and Bill Russell).

Hank Aaron is an entirely different proposition. At no time in the first 15 years of his career did anyone think of him in terms of catching Ruth. At that time he had 510 homers. But when he hit a career-high 47 at age 37 in 1971, the dialogue changed. 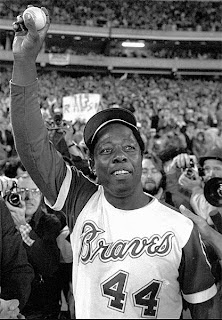 Babe played in hot flannel uniforms and sweltered in hotel rooms that had yet to hear of air conditioning. Hank got to wear a modern fabric (eventually) and slept in the comfort of AC (eventually).

Babe got to hit against tired starters in the seventh, eighth, and ninth innings. Hank played in the transitional era when fresh, skilled relievers assumed great prominence.

Babe swung at dirty, scuffed balls that had been in play a while. Hank always swung at a fresh, white baseball.

Babe had Yankee Stadium. Hank started out in Milwaukee County Stadium, which was home run neutral (315 down the lines, but with reasonable power alleys) before switching in 1966 to Atlanta-Fulton County Stadium, which, during Hank's time, was nicknamed "The Launching Pad."

Babe spent his first three years exclusively as a pitcher, not playing full-time outfield until 1919, his fifth full year. Even with a so-called dead ball, may we not give him, oh, 40 more homers? 50? Who knows?

I'm not going to rehash Barry this morning. I think we're all Barryed out by now. If you think he's really the Home Run King, you salute him.

Bob Ryan is a Globe columnist. He can be reached at ryan@globe.com.
Posted by jtf at 3:43 PM