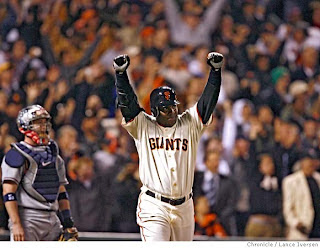 For the 756th time in his singularly spectacular and conflicted career, Barry Lamar Bonds turned a pitcher's best intention into a home run. On a 3-2 count in the bottom of the fifth inning, Bonds swung that custom-made, double-lacquered, Canadian toothpick of a maple bat of his and sent Bacsik's fastball about six rows into the right-center field seats -- and into baseball history.

Bonds is now the all-time major league leader in home runs and controversy. He did it 14 days after his 43rd birthday and 21 years after his first dinger. He did it on his own exacting and mysterious terms.

As the ball arched toward the waiting sea of humanity, Bonds dropped his bat and then raised both arms in triumph and perhaps relief, too. He stood at home plate for several seconds, took four steps toward first base, and then began his familiar 360-foot tour of the base paths. His smile was as wide as the bill of his cap.

The San Francisco Giants fans roared loud enough to set off sensor warnings at earthquake centers. That stadium, that city and those fans remain Bonds' refuge, and he rewarded them with The Home Run and, if you believe in such things, The defining moment in all of sports.

Bacsik, the 29-year-old Texan who had clawed his way back to the big leagues after years in such places as Burlington, Buffalo and Scranton/Wilkes-Barre, tipped his cap to Bonds. The left-hander had given up a double and a single to Bonds earlier in the game. This time, with one out in the fifth, he gave up the home run that allowed Bonds to end Henry Aaron's 33-year reign as the major league home run king.

Bonds then bowed and blew kisses to the AT&T sold-out crowd. His godfather, the great Willie Mays, was escorted to the field. A prerecorded video from Aaron was played.

You can admire or despise him, but you can't deny Bonds' ability to make us watch. It was spellbinding stuff and -- wait ... I'm sorry. I can't do this anymore.

I can't pretend what Bonds did Tuesday night in front of a national television audience and his adoring but myopic Giants fans is anything more than a make-believe piece of baseball drama.
I can't pretend Bonds' 756 homers truly matter because there's no way of knowing how many of them were hit by Barry The Clean or Barry The Cream.

I can't pretend Bonds is the legitimate successor to Aaron because there are simply too many questions and too much evidence to suggest otherwise.

And in the end, I can't pretend because I believe in the purity of Aaron's numbers, but not in coincidences. What Bonds has done, as his body has morphed from a lithe, ungodly, athletic rookie into a Silver Surfer look-alike, was no coincidence. I believe it was cheating. Rationalize and justify all you want, but Bonds had a choice. And I believe he chose to cheat.

The disconnect between Bonds and actual baseball immortality has never been more obvious. Commissioner Bud Selig wasn't in attendance. His absence wasn't out of spite, but let's face it, Selig has looked like he'd rather be doing anything -- giving congressional testimony ... going to the Westminster Dog Show with Michael Vick -- than wait for Bonds to hit No. 756. By skipping Tuesday night's game, he saved everyone the sight of him with his hands in his pockets again.

Of course, Aaron took a pass on the trip. Was it because he didn't want to schlep around the country as the one-dimensional Bonds labored to reach 756? That's the official Pravda stance, and Aaron has stuck by it. But you wonder what would have happened if it had been anyone other than Bonds who was breaking his record.

But maybe he can't pretend, either.

"It is a great accomplishment," said Aaron in the video, "which required skill, longevity and determination."

And a chemist's skill.

No, this has to do with who Bonds is, not what he is. Who cares if he's a self-absorbed control freak (Gary Sheffield's words, not mine) with a martyr syndrome? What matters is his moral DNA. And in Bonds' case, he traded his baseball ethics for the money and for Aaron's record.

Bonds and his career numbers are a fraud. Just like McGwire's. Just like Rafael Palmeiro's. Just like Sammy Sosa's. Bonds wasn't the first to be connected with steroids or performance enhancers, but he's the first to overtake Aaron. And that's why you should care.

For all intent and purpose, he is the closest thing to a designated hitter in the National League. He can't run. His arm is modest at best. He is a defensive liability.

But the man knows what to do with a bat. The realities of middle age have forced him to downsize to a preferred 34-inch, 31.6-ounce maple model, but it's still fascinating to watch as Bonds tries to coax his body into keeping up with his baseball mind. It was so much simpler a few seasons ago, when he was using Victor Conte's miracle flaxseed oil.

As usual, Bonds continues to miscalculate his appeal. He thinks a great injustice has been done to him, when really it's the other way around. He is the master of inflicting collateral damage and then pretending none of it was his own doing. Just watch, he'll spin the new record into a passion play.

Last month, during a pre-All-Star Game media session in a downtown San Francisco hotel, Bonds was nearly enveloped by reporters and TV cameramen. At the end of the hour-long session, Bonds stood up and, in a satisfied, smug tone, said to no one in particular, "They all say I'm the most disgusting thing, but they all stand here for me."

We all stand, but not to honor him. That's reserved for players who did it the right way, the honest way.

Gene Wojciechowski is the senior national columnist for ESPN.com. You can contact him at gene.wojciechowski@espn3.com.