Yankee Stadium is the House That Derek Jeter owns

This happened a long time ago at old Yankee Stadium, happened when Derek Jeter was much younger than he is now, happened in much better times than these for the Yankees.

It was a Sunday morning and there had been a game that ended late the night before, so nobody had to show up early for batting practice, because there wasn't any that day. I was having a cup of coffee with David Cone, and the clubhouse door opened, and here came Derek Jeter. 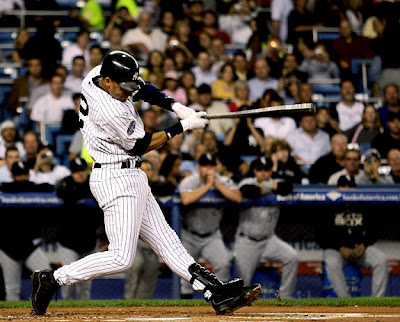 Cone's locker was around the corner from what was still Joe Torre's office. Jeter was on the other side, down near the trainer's room.

He walked to his locker and Cone watched him go, then said, "It's good being Derek Jeter."

It is good being Jeter even now, when he didn't start hitting until it was too late.

He didn't do much more than anybody else on the team when the Yankees still had a chance to make it to another baseball October. But even now, on his way out of the only baseball home he has ever known, you see why he is one of the most popular Yankees in history, maybe the most popular since Mickey Mantle.

Even now, in a season when the Yankees have been such a disappointment, when they have seen both the Rays and the Red Sox run away in the American League East, Jeter's personal exit music are these tremendous cheers, night after night, win or lose.

On Tuesday, he passed Lou Gehrig, became the player with the most hits in the history of Yankee Stadium, and Wednesday night he played his 1,000th game at Yankee Stadium.

He remains the star he has been for such a long time at the Stadium even if he is not the hitter or the shortstop he once was. Mo Rivera also hears the kind of cheers that Jeter does at the Stadium. Jeter hears them more often, not just for the records he sets, but because he is still here.

He is not the hitter Alex Rodriguez is, or even close. Someday Rodriguez, if he stays healthy, could end up baseball's all-time home run champion.

But it is Jeter who remains the champion of Yankee fans, and you know that if you asked most Yankee fans to choose between him and A-Rod, they would choose Jeter hands down. At 34, not able to drive the ball the way he did or produce the numbers he did in his glory years or even show the range in the field, it is as if he is more a Yankee than ever. 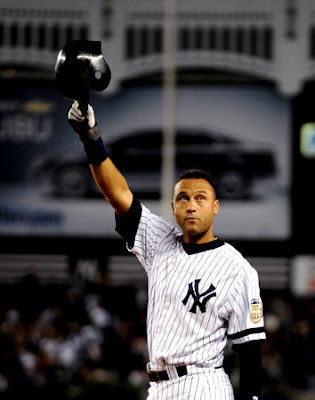 'I'm always a little uncomfortable in those situations,' says Jeter, who adds another hit later.

And he still knows how Yankees are supposed to act. The night of the All-Star Game, you looked over in the 14th inning, long after A-Rod had disappeared into the night, there were two people on the top step of the American League dugout: Boston's Terry Francona, managing the game, and Jeter, who'd been out of the game for hours.

This has been stated before: He is not the Yankee that Joe DiMaggio was, but he has been the DiMaggio of this Yankee era. So he has been the face of the Yankees, not the voice. Never the voice. He has talked about his team, and sometimes quite eloquently. But Jeter has never, not for a single day, seen his job - even after becoming captain of the team, such a high Yankee honor - as being the team spokesman.

Of course there have been times when he spoke eloquently. There was the time when the Yankees were down two games to one to the Angels in the first round of the 2002 playoffs, and about to be eliminated. Before Game 4, somebody said something to Jeter about how the team had gotten out of worse spots than this before.

It was better than a speech, Jeter speaking to how the makeup and the character of the team had changed in just the two years since the Yankees had won their last World Series. Now it has changed a lot more than that. Now, in the last year for this Stadium, they won't even make the playoffs. And still he hears the cheers, from across all the years.

He does what he has always done, from the glory years until now: Shows up every day and plays hard. He never does anything to embarrass himself or his team. He knew who he was as a kid in '96 and he knows who he is now. Eventually he will play more games for the Yankees than anybody has ever played, honor the uniform as much as anybody who has ever worn it.

I asked him once how he sees himself, as a shortstop or a World Series champ or the captain of the team.

"I see myself as a Yankee," Jeter said.

He goes across the street with the rest of them next season. It will still be called Yankee Stadium. The new place won't be as good for Jeter, can't be, just because of everything he saw and everything he heard at the old place. Maybe that is why it is fitting the last loud roar on this side of the street is for him.
Posted by jtf at 5:44 AM

Jeter as you described is a modern day Yankee hero.
On the other hand, Alex Rodriguez is a malignancy
that will have to be removed from the organization
before they return to world champion status. Un-
fortunately neither the younger Steinbrenners nor
the soon to be shown the door Brian Cashman un-
derstand this. How many world championships were
won by the likes of people like Luis Sojo or Jose
Vizcaino or Paul O'Neill or Scott Brosius and the list
goes on and on and on. When Arod started on his
spiritual journey by cheating on his wife the Yankees started on their downhill slide. Maybe it was a Kabbalistic curse. This organization is done
and it saddens me because I remember those great
years although I still grieve for Jimmy Leyritz.