[I highly recommend this DVD...if you still have it, watch it...If you don't, find a copy and watch it. Link to the movie's official website below.- jtf]

The DVD Obsession is being packaged with the morning paper all over the country, and millions upon millions of copies have been distributed. That's all to the good, but the reaction to it shows in numerous ways that many, if not most, Americans have no clue about what we're up against.

Of course, the distribution of the film is designed to fix that problem, and for many people it probably will, but in the Jihad Watch echo chamber it is easy to lose sight of the fact that we represent a very, very small percentage of people who realize the nature and magnitude of the jihad threat. Polls show that fewer Americans today believe that terrorism is a threat than at any time since before 9/11; several of the larger blogs that used to care about this issue have for various reasons lost interest; and the jihad threat is nowhere discussed fully and adequately in the mainstream. 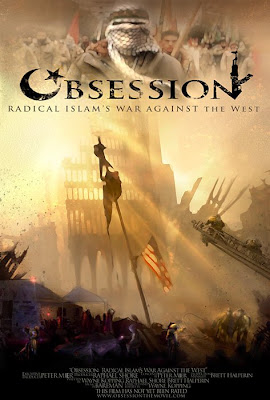 A few of the news stories commenting on the Obsession distribution indicate the scope of the general ignorance. I had originally intended this as an elephantine post discussing several of these stories, but I went on so long about the first one here that I will save the others for future posts.
"Controversial film on Islam delivered nationwide," by Yonat Shimron for the Raleigh News & Observer, September 11 (see also Raymond's comments here):

Bundled in home-delivered editions of The News & Observer today is a paid insert featuring a controversial DVD on Islam that has stirred anger nationwide. [...]

Translation: "Readers, don't take this DVD seriously. It's "controversial." This is what passes for journalism these days, but just consider for a moment how different readers' reactions would have been if the story had started out this way: "Bundled in home-delivered editions of The News & Observer today is a paid insert featuring a DVD on Islam that attempts to alert people to the magnitude of the jihad threat." Which lead is more objective?

Jim McClure, vice president of display advertising for The N&O, declined to say what it is charging to deliver the DVD as part of today's newspaper. He dismissed allegations that it is inflammatory.

"In the beginning of the DVD it clearly states it's not about Islam. It's about radical Islam," McClure said.

That is a key weakness of an otherwise excellent film. Of course, it probably wouldn't be being distributed all over the country if it had spoken more forthrightly about the roots of the jihad ideology and Islamic supremacism in core Islamic texts and teachings. The problem is not so much with the use of the term "Radical Islam," which can refer to many things and doesn't necessarily assume that the violent and supremacist elements of jihadist teaching are corruptions of Islamic theology, but with the implication in the film that there is a benign, mainstream and standard version of Islam that does not teach warfare against and the subjugation of unbelievers. There isn't, and it is misleading in the extreme to suggest otherwise. There are many peaceful Muslims who have no interest in furthering the jihad and never will, but there is no peaceful Islam -- and that makes these peaceful Muslims always vulnerable to appeals to Islamic authenticity.

Despite the disclaimer, the film features prominent anti-Muslim pundits, including Daniel Pipes, Steven Emerson and Walid Shoebat, who told the Springfield News-Leader -- a Missouri daily -- that "Islam is not the religion of God -- Islam is the devil."

To dismiss Pipes and Emerson as "anti-Muslim pundits" is to ignore the monumental work they have both done to expose the activities of jihadists in the United States and elsewhere, reducing this work to bigotry and trivia. Which was, no doubt, precisely the objective.

Muslims across the nation and in the Triangle said they are disappointed by the film.

"It adds fuel to the fire and devalues the work we do," said Khalilah Sabra, an organizer with the Raleigh chapter of the Muslim American Society, which lists "promoting understanding" as its mission. 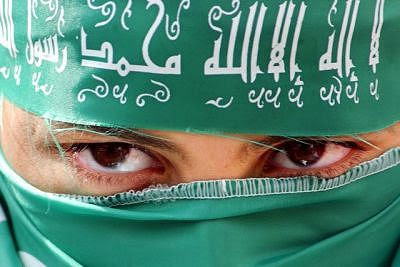 While Pipes, Emerson, and Shoebat are tarred and dismissed as "anti-Muslim," Khalilah Sabra and the Muslim American Society are all about "promoting understanding." The N&O can't find any room for the fact that, according to a 2004 Chicago Tribune exposé, the Muslim American Society is the name under which the Muslim Brotherhood operates in the United States. Nor does it mention that according to a 1991 Brotherhood memorandum about its strategy in the U.S., it is embarked upon a “grand Jihad” aimed at “eliminating and destroying the Western civilization from within and ‘sabotaging’ its miserable house by their hands and the hands of the believers so that it is eliminated and Allah’s religion is made victorious over all other religions.”

The film features footage of elementary schoolchildren reciting mantras such as "When I wander into the entrance of Jerusalem, I'll turn into a suicide warrior."

Its aim is to liken radical Islam to Nazism and to promote the state of Israel, said Omid Safi, a professor of Islamic Studies at UNC-Chapel Hill, who has seen the film several times.

"One of the running themes is, 'We stand today as the world stood in 1938,' " said Safi, referring to the rise of Nazism. "It's fear mongering. It appeals to people's emotions."...

Not like Omid Safi, who propagandistically stacks the deck for his students by pre-emptively classifying a diverse list of people as "Islamopobes" and asking them to write a report on their evils. No emotionalism in that, oh no. Omid Safi is all dispassionate intellect -- as witness his fearmongering and emotionalism a bit farther on in the story:

In a statement, N&O Publisher Orage Quarles III wrote: "As a newspaper we tend to shy away from censorship. In cases of controversial topics, if we err, we tend to do so on the side of freedom of speech."

But some questioned whether this is a censorship issue.

"If there was a 30-minute DVD warning people against the danger of blacks or Jews, would the N&O distribute it?" asked Safi....

Safi, of course, ignores the distinction that the film makes between non-jihadist Muslims and jihadist Muslims -- however faulty the distinction is made in the film (as I explained above), it is certainly made, and made more than once. And there is no doubt that many Muslims are not on board with the jihadist program. Safi himself professes to be one of them. But in his comment here Safi would have you believe that the film lumps all Muslims together, and is thus comparable to a Klan piece on blacks or a Nazi piece on Jews.

Were Omid Safi at all interested in being fair-minded, he would acknowledge that the film makes this distinction, and would even perhaps explain why a film about an ideological threat does not fall into the same category as scaremongering about racial groups.

But it gets even worse: the story concludes with a Muslim playing the victim card -- and, of course, there is no mention made of how many Muslims-as-victim stories have been fabricated outright or greatly exaggerated:

One Muslim reader wrote the N&O to say that the film can only make local Muslims feel vulnerable.

"I must say that this video makes me fear for my safety and the safety of my family since people may not be able to differentiate between Muslims living here in Raleigh and the way Muslims are depicted in this scary film!" said Shadi Sadi, a data analyst in Raleigh.

To put this in perspective, consider the prospect of a German in 1943 writing angrily about an anti-Nazi presentation that it put Germans in fear for their safety. By contrast, German-Americans were anxious to prove their loyalty to the United States. Those days, it seems, are gone forever.

A controversial DVD distributed to millions of Americans during the past week through direct mail and newspapers, including The Miami Herald and El Nuevo Herald, has angered many Muslims in South Florida.

Obsession: Radical Islam's War Against the West is being packaged as an advertising insert in 70 newspapers, including The Sun Sentinel and The Palm Beach Post....

The DVD includes montages of terrorist training camps and suicide bombers paired with narration by commentators such as Daniel Pipes, founder of the conservative Middle East Forum think tank. Many of the film's pundits are known for controversial views on Islam. In one part of the DVD, clips of Muslim children being recruited as suicide bombers are interspersed with images of Nazis. 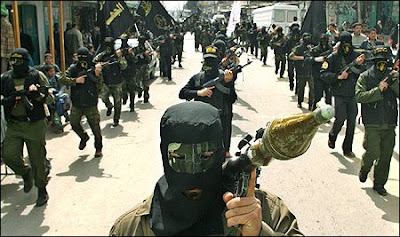 ''My cellphone has been ringing off the hook . . . We feel that it's going to incite more hate and bigotry against our community,'' said Altaf Ali, Florida chapter director of the Council on American-Islamic Relations. The DVD does not do enough to differentiate between terrorists and mainstream Muslims, he said....

Neither, of course, does CAIR. CAIR is an unindicted co-conspirator in a jihad terror funding case. It is a spinoff of the Islamic Association for Palestine (IAP), which is listed in the 1991 Muslim Brotherhood memorandum on strategy in the U.S. as part of its "grand jihad" aimed at "eliminating and destroying Western civilization from within." Several of its officials have been arrested and convicted on terror-related charges, and one of its founders has made Islamic supremacist statements, hoping that one day the Qur'an would be the only law of the land in America. But the Herald, of course, mentions none of this.

Syed Rahman, a Muslim pharmaceutical consultant from Weston, said he was shocked to see the film bundled with his Sunday Miami Herald. ''I could not believe my eyes,'' he said. Nidal Hussain, a Kendall computer consultant, was also taken aback. ''I watched it with my wife . . . it is vulgar material,'' he said. ``I'm sure good, wholesome Americans are going to see it and be able to decipher the truth.''

I'm sure they will.

At least one newspaper, The News & Record of Greensboro, N.C., decided not to distribute the DVD. The publisher ''said it was divisive and plays on people's fears and served no educational purpose,'' editor John Robinson wrote in his blog....

Robinson did not explain what exactly we should do with those jihadist preachers preaching death and destruction in the video.