After 15 years without a new album in the U.S., Tom Jones will release a disc of almost entirely original material this fall. 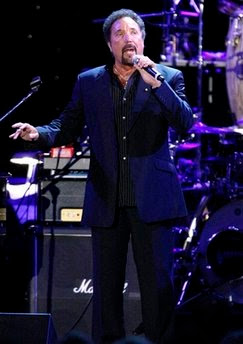 NEW YORK — After 15 years without a new album in the U.S., Tom Jones will release a disc of almost entirely original material this fall.

The 68-year-old singer will release "24 Hours" on Nov. 25 on S-Curve Records. It's a retro-tinged album much in the style of Amy Winehouse's "Back to Black" that finds the Welshman's voice as strong as ever.

"The fire is still in me," Jones told The Associated Press in a recent interview, speaking by phone from his home in Los Angeles. "Not to be an oldie, but a goodie. I want to be a contender."

The disc was produced by British production duo Future Cat, who have cut tracks for Lily Allen, Kate Nash and others. With backing horns and an almost Stax Records kind of soul, the sound is distinctly retro.

"We've been thinking about this for a while, doing a retro sound but new," said Jones. "And Amy Winehouse, she cracked it. When that album came out, my son called me right away and said, 'You know what we've been talking about? Listen to this.' "

Since he released the hit "It's Not Unusual" in 1965, Jones has sold more than 100 million records worldwide. While his 2000 album "Reload" was a hit in Europe and elsewhere (buoyed by the club hit "Sex Bomb"), it was never released in the U.S. — which Jones calls "a shame."

"The hits that I've had recently have all been European," he said. "I've had a lot of success worldwide, which is a pain because I live here and I do most of my shows in America. ... Hopefully this will straighten that out."

Jones, who regularly performs in Las Vegas, believes his voice hasn't aged — thanks partly to his careful treatment of it; he takes a humidifier with him traveling to keep his throat from drying. Jones even believes his lower registers have gotten richer.

"I wanted my voice to sound as natural as possible," Jones said of the album. "The arrangements and the production needs to be modern, but the vocal needs to sound like me."

There are two covers on the album — Bruce Springsteen's "The Hitter" and "I'm Alive" by Tommy James and the Shondells — but the rest Jones either co-wrote or collaborated with the songwriters. Bono and the Edge of U2 guest on the song "Sugar Daddy."

"I love doing the songs that I've had success with and the audience keeps those alive," Jones said. "But I love moving on."
Posted by jtf at 5:50 PM