British papers are reporting that shari’a law has been officially adopted in Britain, with shari’a courts given powers to rule on Muslim civil cases, notably including wife beating. Gordon Brown’s Labour government “has quietly sanctioned the powers for sharia judges to rule on cases ranging from divorce and financial disputes to those involving domestic violence.” Particularly alarming is the fact that Islamic rulings are now enforceable with the full power of the judicial system, through the county courts or High Court. Previously such rulings could not be enforced by the British state. 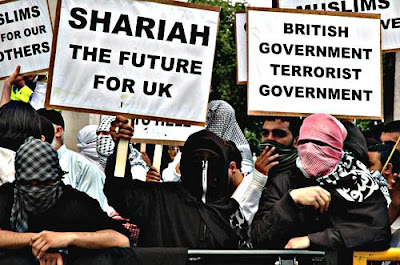 Shari’a courts with these powers have been set up in London, Birmingham, Bradford and Manchester with the network’s headquarters in Nuneaton, Warwickshire, with two more courts planned for Glasgow and Edinburgh. A visibly pleased Sheikh Faiz-ul-Aqtab Siddiqi, whose Muslim Arbitration Tribunal runs the courts, explains that he had taken advantage of a clause in the British Arbitration Act of 1996, which classifies sharia courts as “arbitration tribunals” whose rulings are binding in law once both parties in a dispute agree to accept its authority. It goes without saying that battered Muslim wives and disinherited Muslim daughters will “freely choose” the authority of shari’a courts rather than face various unpleasant and potentially fatal consequences of not conforming to the “community’s” rules and preferences.

What this means in practice was evident from a recent inheritance dispute in the Midlands, when the Nuneaton shari’a court divided the estate of a Muslim father between three daughters and two sons. The “judges” gave the sons twice as much as the daughters—perfectly in accordance with sharia, of course, but contrary to any regular British court, which would have given the daughters equal shares. In six cases of domestic violence quoted by Siddiqi, the “judges” ordered the husbands to take “anger management” classes and “mentoring from community elders” (such as imams and shari’a judges). In each case, the battered women subsequently withdrew the complaints and the police stopped their investigations. It should be noted that under normal British law those six cases could have been prosecuted as criminal, rather than “family” cases.

UNDERSTANDING SHARI’A—Muslim activists point out that allegedly simiral Jewish family courts (Bet Din) and Catholic marriage tribunals have existed in Britain for many years, but there is a major difference: such courts explicitly claim jurisdiction only over their believers, whereas according to orthodox Islamic teaching shari’a is the only legitimate law in the world, with universal jurisdiction over Muslims and non-Muslims alike. To a devout Muslim the incorporation of shari’a into British law is by no means the end of the affair. It is merely a major milestone on the road that cannot stop short of subjecting all Britons, regardless of faith, to the stricutres of Allah’s commandment and Muhammad’s example.

The Islamic law, the Shari’a, is not a supplement to the “secular” legal code, it is the only such code and the only basis of obligation (Kuran 4:8). No mere human entity has the authority to enact laws: shari’a judges cannot do or enact anything contrary to the Kuran or Sunnah. The definition of what is just depends solely on Allah’s will and Muhammad’s acts, to which none of the usual moral criteria found among non-Muslims is applicable. “Just” and “unjust” are not regarded in Islam as intrinsic characteristics of human actions to be legally judged. A shari’a judgment requires extensive knowledge of the Kuran and the Hadith, of course, as well as of Islamic legal precedents. Nevertheless, the body of sources of the law is finite and only qiya, or analogical reasoning, can be applied in the judgment.

Contrary to the Christian concept of governmental legitimacy (Romans 13:1), Islam condemns as rebellion against Allah’s supremacy the submission to any other form of law (Kuran, 5:50). Muslims believe that Shari’a should be used as a standard test of validity of all positive laws. Christ recognized the realm of human government as legitimate when he said, “Render therefore to Caesar the things that are Caesar’s, and to God the things that are God’s” (Matthew 22:21). In Islam there is no such distinction between church and state.

Shari’a is not at all a “religious law” but a blend of political theory and penal law that relies for the punishment of violators on the sword of the state. To be legitimate, all political and legal power must rest with those who obey Allah’s authority and his revealed will sent down through his prophet (Kuran 5:59). Shari’a applies to all humankind just as Kuran applies to all creation. Any law that is inconsistent with it is null and void, not only to the Muslims, but to all humanity. Jews, Christians, and pagans are subject to Shari’a, too, and from Muhammad’s standpoint they cannot invoke the judgments and moral principles of prior revelations (4:60). Resort to any other source of authority is not only unjustified, it is satanic. The non-Muslims are to be judged by the laws of Islam in everything, “whether they like it or not, whether they come to us or not.”

Shari’a stands above reason, conscience, or nature. Its lack of any pretense to moral basis is explicit: there is no “spirit of the law” in Islam, no discernment of the consequences of deeds. The revelation and tradition must not be questioned or any other standard of judgment—least of all any notion of “natural” justice inherent to men as such—can be invoked, let alone applied (5:45). Muhammad has stifled in his followers the proclivity to natural law, “this high and often ultrahuman motive enhanced by education and refinement” (C.S. Lewis). A shari’a judge, like any other good Muslim, knows that thing is right simply because Allah says so, or because the prophet has thus said or done. No other standard of good and evil can ever be invoked.

BRITANNIA DELENDA—The ruling elite in Great Britain is either ignorant of, or more likely indifferent to, the implications of shari’a’s incorporation into the country’s legal system. The pace of Islamification of Britain is impressive. Earlier this year Rowan Williams, the Archbishop of Canterbury, declared on BBC Radio 4 that the establishment of sharia “seems unavoidable” in Britain. Two months ago Britain’s top judge (“the lord chief justice”), Lord Phillips, said that Muslims in Britain should be able to live under sharia. Theirs is the mature form of appeasement and surrender that has a long and inglorious history.

In the immediate aftermath of 9-11, then-Prime Minister “Tony” Blair said, “What happened in America was not the work of Islamic terrorists, it was not the work of Muslim terrorists.” Speaking to Muslim “community leaders” he added: “It was the work of terrorists, pure and simple,” who must not be honored “with any misguided religious justification,” because they “contravened all the tenets of Islam” which “is a peace-loving, tolerant religion.”

Echoing the Prime Minnister, two weeks after 9-11 former Home Office Minister John Denham made a pledge to cut out the “cancer of Islamophobia” allegedly infecting Britain, and declared that “the real Islam is a religion of peace, tolerance and understanding.” He called on the media to avoid promoting “a distorted or caricatured or prejudiced” view of Muslims or the Islamic faith. Yet Dr. Richard Stone, chairman of the Commission on British Muslims and Islamophobia, responded by criticizing the government for not addressing “in a deep way” the anti-Muslim prejudice and for failing to address “institutional Islamophobia.”

Exactly six months later, on July 7, 2005, London’s turn came. The suicide bombers were four young British citizens, Muslim by religion, three of them Pakistani by parentage, born and bred in England and educated in state schools. Yet the deputy assistant commissioner of London’s Metropolitan Police, Brian Paddick, said that the culprits “certainly were not Islamic terrorists, because Islam and terrorism simply don’t go together.” He repeated, almost word for word, Tony Blair’s assurances given four years earlier. Blair himself declared it was hard to understand how those “born-and-bred Yorkshire lads” could turn on their fellow citizens. His reference to the morbid jihadist team as “lads”—an English term of endearment for the youthful male person, derived from Middle English ladde—was indicative of a seriously deranged mindset.

The adoption of shari’a is a logical outcome of the Blairite forma mentis, the size of Muslim immigration into Britain, and the dynamics of that growing community’s symbiotic interaction with the elite consensus. That consensus had started emerging even before the Rushdie affair (1988) allowed Muslims in Britain to flex their muscles in open opposition to the law of the land.

A generation later mosques and Islamic centers have multiplied all over Britain and provide the backbone to terrorist support network. The British security services have largely followed their political masters into a state of denial regarding the threat. The courts, for their part, routinely interpret the criminal, asylum, and terrorism laws in the manner damaging to the security of the Realm and favorable to the Jihadist underground. That underground thrives in mosques, state-supported Islamic educational institutions and community centers.

The new and supposedly improved Tory Party hardly offers an alternative. After a string of electoral defeats, under David Cameron it has joined the multiculturalist bandwagon. He now believes in racial, ethnic, and gender-based quotas. His colleague, the Conservative Party chairman Francis Maude, says immigration had been “fantastically good” for the United Kingdom.

Such inanities are light years away from another British Prime Minister and a far truer Tory, Winston Churchill, who warned over a century ago that “no stronger retrograde force exists in the world” than Islam: “Far from being moribund, Mohammedanism is a militant and proselytizing faith. It has already spread throughout Central Africa, raising fearless warriors at every step; and were it not that Christianity is sheltered in the strong arms of science—the science against which it had vainly struggled—the civilization of modern Europe might fall, as fell the civilization of ancient Rome.”

The science is still there, but the shelter has been eroded, perhaps fatally, in the realm of the soul. T.S. Eliot may yet be proven right in his warning that the West would end, “not with a bang but a whimper.”

Email ThisBlogThis!Share to TwitterShare to FacebookShare to Pinterest
Labels: Europe, Islam and The West, Srdja Trifkovic