Does France Have a Prayer?

These seem like perfectly fitting sentiments for Pope Benedict to express during his pastoral visit to France this weekend. But these are actually the words of his host, French President Nicolas Sarkozy, spoken last December at the Vatican during an unusual — and unusually thoughtful — official reflection on French secularism.

No doubt Benedict agrees. But that hardly implies across-the-board papal endorsement of Sarkozy’s political views, much less direct papal intervention in French politics, as some careless observers suggest. Hence the London Times, for instance: “Pope Benedict XVI waded into French politics [Friday], throwing his weight behind a controversial drive by President Sarkozy to put religious faith back into the life of the strictly secular state.” 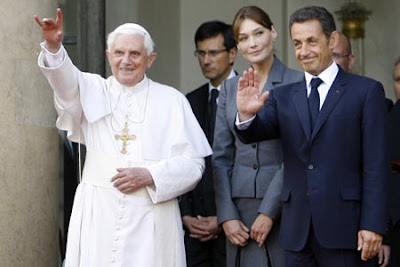 Pope Benedict XVI, left, and France's President Nicolas Sarkozy, right, gesture after their meeting at the Elysee Palace Friday, Sept. 12, 2008, as French first lady Carla Bruni-Sarkozy, center, looks on. Benedict XVI has arrived in France for a four-day trip that will take him from the presidential Elysee Palace in Paris to the shrine in Lourdes. (AP Photo/Alessandra Tarantino)

The three-fold aims of Benedict’s pastoral visit were to (a) encourage the local church; (b) further dialogue with secular European cultures and institutions; and (c) remind the universal church, mainly through his own personal witness, that a highly intellectual faith is entirely compatible with traditional forms of devotion.

Benedict’s first and foremost aim was to encourage French Catholics, now emerging from a long period of decline and demoralization as a more compact, committed, and dynamic community. Roughly 75 percent of France’s 60 million citizens are baptized Catholics, though far fewer identify themselves as Catholics or practice their faith. Only 5 to 10 percent attend Mass on a weekly basis (versus perhaps one-third in the U.S.).

France’s trajectory from “eldest daughter of the church” (la fille aînée de l’Eglise) to “mission country” (pays de mission) — as one senior cleric acknowledged as early as the 1940s — has particularly French causes rooted in modern French history, culture, and politics. The upshot is that committed French Catholics are such by choice, rather than by tradition or convenience, and are therefore noticeably more forward-looking, hopeful, and “evangelical” than their immediate predecessors.

This “creative minority” — Benedict’s term for committed Catholics in an increasingly secular Europe — was the pope’s principal focus. In fact, Benedict’s presence brought more Catholics into the streets than any event in the past quarter century, recalling the spontaneous demonstrations that erupted against Francois Mitterand’s unsuccessful back-door attempt to close down Catholic schools.

In a revealing interview with the center-right daily Le Figaro, France’s new Catholic leader, Cardinal André Vingt-Trois, the watchword is hope, a term long absent from ecclesial parlance: “To be sure, we’ve undergone hard times since the 1970s and I expect that the Pope will encourage us to tackle the situation with hope and confidence.” He spells out these objectives:

First of all, we must intensify our spiritual life. Christians can’t tackle the issues and conflicts in the life of our society without being profoundly rooted spiritually. It follows that our church should serve as a witness for hope. The church needs to say that humanity isn’t stuck in a fatalistic trap, be it economic, ecological, or political.

Nowadays hope is in especially short supply among the French, especially the young, who find the whole system rigged against those just getting started in life. France as a whole is sharply divided between haves and have-nots, the former consisting of comfortable retirees and secure middle-aged workers (impossible to dismiss without incurring confiscatory tax penalties), protected by the heavy hand of France’s massive unionized bureaucracy and a notably risk-averse culture.

Not surprisingly, young people in France rank at the bottom of a recent international poll measuring confidence in the future (Americans ranked at or near the top). One consequence is the “flight of the young” (la fuite des jeunes), whereby the most able and ambitious are emigrating, almost invariably to the same two destinations: London and New York.

Sarkozy acknowledged the phenomenon of widespread hopelessness in his Vatican speech, explicitly linking religious faith with hope. “A person who believes is one who hopes. And it’s in the interest of the Republic that there should be men and women who hope.”

In fact, Sarkozy’s Vatican speech (official text here, partial English translation here) is an excellent example of Benedict’s second aim, namely the dialogue between faith and secular European culture. In a nutshell, Sarkozy proposed a new understanding of French secularism (laïcité), traditionally marked not only by the strict separation of church and state and state neutrality regarding belief and non-belief, but also the strict exclusion from the public square of religious arguments or symbols (like Muslim headscarves). This was often carried to the point of excluding religious believers themselves — based on the simple fact of their belief — from advancing purely secular or philosophical arguments in matters of public policy. The upshot was a pervasive climate of mutual suspicion and hostility, often marked by exceptional pettiness on the state’s part (refusing to establish institutional links with the French bishops’ conference until 1992, for instance).

In his speech, Sarkozy in effect proposed a fresh start, beginning by acknowledging the historical reality of Christian contributions to France and French contributions to Christianity. The next step, he argues, is to identify common ground and common concerns for a long-overdue dialogue. That seems wholly unobjectionable in an American context, which is perhaps why the French Left — as reflexively anti-American and anti-religious as some of their ideological counterparts here — erupted in fury.

Dialogue with religious believers and religious groups was dismissed out of hand as utterly incompatible with republican ideals. But nothing enraged the French secular establishment (led, as always, by Le Monde) as Sarkozy’s pointed observation that religious faith may offer some distinctive — and otherwise unavailable — contributions to French society. “In transmitting values and teaching the difference between good and evil,” Sarkozy said, “the teacher will never replace the [Catholic] priest or [Protestant] pastor.”

These are fighting words in a culture where teaching is widely seen the exclusive monopoly of unionized government functionaries; and where good and evil are often dismissed as outdated and dangerous categories, ideally replaced by some utilitarian calculus informed by the latest intellectual fad. The Left’s reaction may be summed up by Le Monde’s especially nasty front-page editorial cartoon, which features Sarkozy dressed up as a bishop with George Bush lamenting to Benedict that Sarkozy has stolen his job as preacher-in-chief. But a sneer isn’t an argument, much less a rebuttal.

The upshot is that Sarkozy’s Vatican speech has in fact provoked the kind of dialogue that Benedict seeks. While fixing France’s malaise is well beyond the competence and capabilities of the local church, religious voices are engaging in the dialogue for the first time in years. As Cardinal Vingt-Trois observes, Sarkozy’s speech emphasizes that “one can be a Christian and a citizen without having to hide one’s Christian identity.” That may allow an explicitly Christian critique of “brotherhood” (fraternité) — one of the Republic’s three founding ideals — as practiced today, as well as other, more philosophical explorations of French society’s demonstrable lack of solidarity towards have-nots.

Finally, Benedict’s third aim during this visit was to encourage traditional devotions as pastor of the universal church. This is a subject mainly of interest to fellow Catholics and a characteristic theme. And it’s one Benedict emphasized by beginning and ending his visit in Lourdes, the famous Marian shrine, and spending twice as long there as in Paris.

Early indications are that Benedict’s visit was successful, at least according to initial press accounts (his dense prepared texts will take longer to digest). A typical headline (from Le Figaro) reads: “Benoît XVI: ‘Friend of France’ Seduces Paris.’ It’s worth bearing in mind, however, that the French are an easy audience, provided that one speaks elegant and impeccable French, as this pope does. But one immediate result is better communication between Paris and Rome than was the case for quite some time. It’s certainly better than when Cardinal Richelieu, France’s de facto 17th-century political leader, recommended dealing with the pope by kissing his feet and tying his hands.