Quietly, deftly, persistently, cunningly, Sharia law has become the law of the land in Britain in matters of divorce, finances, and domestic violence. Yes–domestic violence. Of course, both parties have to request this alternate dispute resolution model of justice but I bet the British-Muslim women who “choose” to inherit radically less than their brothers and who “choose” not to press criminal charges against their husband-batterers are not making a free choice. In order to remain within their faith and family communities they must submit to Sharia law or risk ostracism, isolation, or the possibility of being honor murdered.

Sheikh Faiz-ul-Aqtab Siddiqi took advantage of a clause in the British Arbitration Act of 1996 and, as the head of the Muslim Arbitration Tribunal has set up Sharia courts in London, Birmingham, Bradford and Manchester. Two more courts are being planned for Glasgow and Edinburgh. The Sheikhs are also comparing themselves to British Jews who “choose” to go to a Jewish court (a Bet Din). However, a Bet Din does not deal with domestic violence per se and has no enforcement powers. 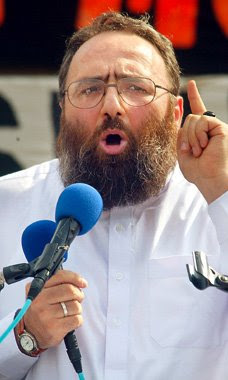 Various “merchants of hatred” aka Sheikh Omar Bakri Mohammed, (stripped of his British citizenship but preaching in London via satellite), and his next-in-command, Anjem Choudary, are predicting that the Islamic flag will soon be flying over 10 Downing Street and they may be right. They are banking on British Muslim population growth and conversions. I note that they are not yet talking about taking over Harry Potter’s Hogwarts School or Buckingham Palace but surely the flight of uncensored imagination as well as the British royal monarchy’s days might well be numbered.

Then, there is the fatwa just issued against Sir Paul McCartney of the Beatles if he dares perform in Tel Aviv as part of Israel’s 60th anniversary celebration. When the various anti-Israel and pro-Palestinian groups failed to persuade Sir Paul to cancel his engagement, they sent in the fatwas. I hope Sir Paul gets an entire unit of elite soldiers to guard him against this horrifying intimidation.

And, while all this is happening, (not to mention the burying alive of Muslim girls and women in the Pakistani Badlands, the violent closure of girls’ schools in Afghanistan, the kidnapping and forced conversions of Christian girls, also in Pakistan)–Hollywood delivers up unto us a religious Muslim hero, played by Don Cheadle who, at great risk, takes on the “bad” Islamist terrorists but in the name of Islam. I only wish. Perhaps such heroes will emerge; perhaps they already exist by the drove. But at this moment in history, Hollywood should try to be a little more even-handed. By the by: The Islamic terrorists in The Traitor are either presented as soulfully sympathetic or as too shadowy to really care about.

Does an Islamic flag already fly over Hollywood? I fear it does. It would be another matter if that flag, like the burqa, did not symbolize jihad and hatred of America–if, for example, it meant that Americans are super-trendy, even honorary Europeans. That is not the case. Hollywood seems to be the first kid on the block to assume a full Dhimmi position.

- Dr. Phyllis Chesler is the well known author of classic works, including the bestseller Women and Madness (1972) and The New Anti-Semitism (2003). She has just published The Death of Feminism: What’s Next in the Struggle for Women’s Freedom (Palgrave Macmillan), as well as an updated and revised edition of Women and Madness. She is an Emerita Professor of psychology and women's studies, the co-founder of the Association for Women in Psychology (1969) and the National Women's Health Network (1974). Her website is http://www.phyllis-chesler.com/.
Posted by jtf at 1:06 PM