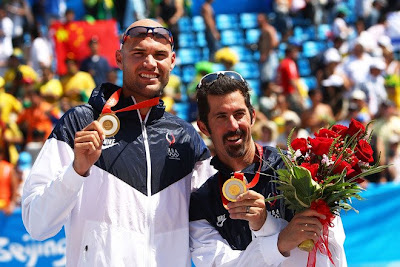 BEIJING - AUGUST 22: Philip Dalhausser and Todd Rogers of the United States celebrate their win over Brazil for the gold medal in beach volleyball game at the Chaoyang Park Beach Volleyball Ground on Day 14 of the Beijing 2008 Olympic Games on August 22, 2008 in Beijing, China. (Photo by Vladimir Rys/Bongarts/Getty Images)

BEIJING- This city, even after three weeks, still can be confusing.

These three destinations, naturally, are nowhere near each other.

But, as the Games of the XXIX Olympiad breathe their final breaths, one thing here has become undeniably clear:

We are a volleyball people. We are all set on sets, dig those digs and will kill for a good kill.

We are to this game what China is to restaurants that specialize in serving weasel entrails.

We invented basketball, have a romance going with baseball and are helmet-over-cleats in love with football.

But it is volleyball where we distinguished ourselves here with all the world watching. We, the people of the U.S. generally and the people of Orange County specifically. You can't spell block without O.C.

Surf or turf, it didn't matter to the U.S. volleyball players, who kicked rearends in China like Michael Phelps kicked air bubbles. 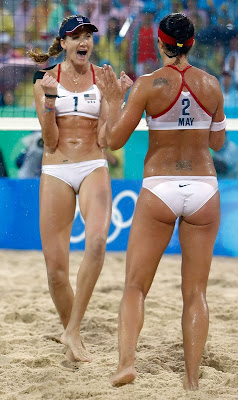 Misty May-Treanor (Costa Mesa) won in beach, her second career Olympic title, and then confirmed she'd now like to go for the gold in diaper-changing.

The silver medal-winning women's indoor team, while assembling the type of Olympic run that occurs every quarter-century or so, featured Heather Bown (Yorba Linda) and Tayyiba Haneef-Park (Laguna Hills).

So we beat them inside and outside, on the land and on the sand, using our reach at the beach. We beat them to the point where some reporters lost their minds and began writing like Dr. Seuss.

But even as America's emergence feels like something fresh, this success marks a game returning to its roots.

This sport was invented in 1895 by a man in Massachusetts, a man actually named Vol E. Ball.

A lot of people don't know that – mostly because it's made up. The man's real name was William G. Morgan.

He was a contemporary of James Naismith, who four years earlier had invented basketball, a sport which, by the birth of volleyball, already had stopped calling traveling.

Supporters today claim volleyball is played worldwide by close to one billion people, making it the planet's second most popular sport, after Guitar Hero.

Anyway, no one is playing the game more consistently well right now than Americans are. We have become a volleyball hotbed and home, with our men's national team based in Anaheim. 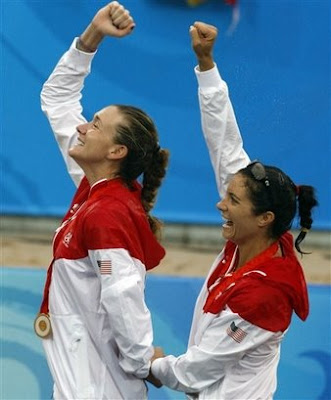 Gold medalists Kerri Walsh, left, and Misty May-Treanor, of the United States, raise their hands after the United States anthem was played during the medal ceremony for women's beach volleyball at the Chaoyang Park Beach Volleyball Ground at the Beijing 2008 Olympics in Beijing, Thursday, Aug. 21, 2008.

Please remember that the Olympics aren't all about success. Failure, in fact, is what the majority of athletes experience at these events.

And not just regular, lose-a-little-sleep failure, either. This is national disgrace stuff, bringing shame and dishonor to an entire country of people you've never even met.

Take wrestler Rajiv Tomer of India. After he was eliminated, Tomer's coach was not terribly supportive.

Know how people like to say someone threw someone else under the bus? This guy did that, then backed up the bus and parked it on Tomer's neck.

"He did not try very hard and his opponent was better than him," coach Piararam Sondhi explained. "Our expectation was that he would lose. Our wrestler was not very good."

Then there was the fate of the Chinese saber team, which, in the mind of coach Christian Bauer, somewhere underachieved.

Asked afterward for an explanation, Bauer said proudly of his troops, "They are all mentally weak."

Japan's commitment can not be questioned. The nation's sanity, however…

Judo coach Hitoshi Saito was so upset that his team won only two gold medals in a sport it traditionally dominates that he vowed to resign. And that was the upbeat part of his story.

"I have to bear the responsibility," Saito told the Yangtze Evening News, "and I think that I should slit my belly to apologize."

So winning some huge volleyball matches in China should not be dismissed without first giving proper acknowledgement.

It's unlikely Hank Williams Jr. soon will be asking, "Are you ready for some volleyball?" "Volleyball Tonight" isn't coming to ESPN.

But we did just re-establish ourselves on a global stage in a sport we invented more than 100 years ago.

Let's take a moment then to recognize the incomparable success of our athletes in these Olympics. 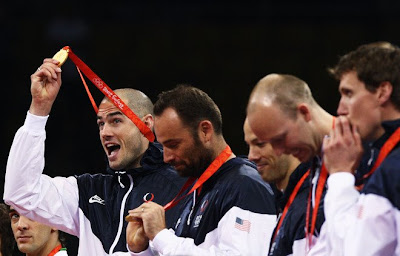 BEIJING - AUGUST 24: Clayton Stanley of the United States celebrates with his gold medal after the Gold Medal volleyball match between the United States and Brazil held at the Capital Indoor Stadium during Day 16 of the Beijing 2008 Olympic Games on August 24, 2008 in Beijing, China. (Photo by Quinn Rooney/Getty Images)
Posted by jtf at 7:31 AM