The New Case Against Immigration: Both Legal and Illegal
By Mark Krikorian
Sentinel, $25.95, 284 pp. 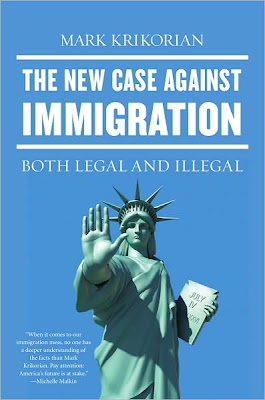 With The New Case Against Immigration, National Review's Mark Krikorian has written one of the year's bravest books. In a political atmosphere where proposing to crack down on even illegal immigration can get one labeled a "nativist" or "xenophobe" in polite circles – and a racist in others – Krikorian dares to question the level of legal immigration, a topic most fear to explore.

For openers. it boggles the mind that an axis of political, media and business elites favors illegal immigration. Nonetheless, stopping illegal immigration is popular among voters. It's so popular, in fact, that presumptive GOP presidential nominee John McCain forsook his mainstream media constituency and its citizen-of-the-world mentality to give lip service to what American citizens want — at least while the Republican primaries lasted.

If Krikorian's name were Mark Running Bear, he'd probably get less flack for questioning the practical effects of legal immigration. I'd bet a dollar that the author hears retorts that Krikorian sure sounds like an immigrant name, as he receives cheap shots about the Armenian Mob.

Everyone should have learned in grade school that one of the minimum standards for being considered a real life nation-state is having a definable border and the means to control it (though, no doubt, that's a controversial topic in many public schools today).

Krikorian's premise is that America has a right to decide who comes here — legally or not —and set a limit on newcomers. Period.

In fact, The New Case Against Immigration spends surprisingly little time on illegal immigration; instead, Krikorian focuses on the effects of mass immigration upon a modern welfare state infected by political correctness.

Unlike many who dare to broach this topic, Krikorian does not contend that today's immigrants refuse to assimilate with American culture or have little interest in it. Rather, he turns the argument on its head.

It's not that immigrants are much different than they were a hundred years ago – it's that America is different in several important ways:

- The nation no longer is set up for mass assimilation. In recent decades, we have set up a racial spoils system that is supposed to make up for past American sins, but it applies to newcomers as well. The public schools – the main engine of assimilation in past generations — don't even try to make proud Americans out of Americans anymore.

- Those who come to the United States from many countries often encounter a seismic shift in technology, traditions and mores. A century ago, the main differences an immigrant faced when coming to America were life under liberty and vastly improved opportunities.

- America no longer is a frontier country looking to populate vast empty territories with a growing need to entice sturdy laborers to our shores.

- Most importantly, the U.S. is now a welfare state -- and minimum income, health care and schooling are guaranteed for anyone who crosses our border. This alone makes mass immigration impractical.

Perhaps the most compelling chapter in The New Case Against Immigration is entitled "Mass Immigration vs. American Sovereignty." One expects the basic argument about borders, but Krikorian makes a compelling case that the U.S. legal system now makes mass immigration problematic — another way in which we have changed more than the immigrants have.

Krikorian documents how the Mexican government, because of the huge numbers of its citizens who live in the U.S., has claimed the right to lobby for and against American legislation at the federal, state and even local levels — and to involve itself in American elections.

Krikorian makes the compelling case that not only does the U.S. legal system currently grant the Mexican government that right, but the egalitarian impulse of American jurisprudence also apparently grants every other country with citizens here the very same rights.

On the other hand, his assertion that mass immigration distorts labor markets is less compelling. Such arguments always have a subjective base of where the "true" market should be and rely on economic projections of conditions that have never existed in real life – namely what wages would be in a restrictive immigration environment.

It does, however, give one pause that in agricultural fields, where harvests depend on cheap and often illegal labor, technical innovations have not progressed for decades.

Krikorian also effectively argues that the large numbers of immigrants makes security impossible, and terrorist watch lists a bad joke. That might be true, but defensive security should always be a last resort, a screen to catch those we have not been able to kill before they get here. It's hard to see a time when so few people would ever be coming into the U.S. that monitoring people and activities would be our primary security activity.

While libertarian-types who look at the world in purely economic terms tend to support open borders, even they admit economist Milton Friedman was right when he stated, "It's just obvious that you can't have free immigration and a welfare state."

Libertarians – never the most practical of people politically – make this an argument to dismantle the welfare state. While I tend to agree, Krikorian is right when he says it is far more likely that U.S. politicians can be persuaded to control our borders than to severely restrict the social safety net, which most Americans support to one degree or another.

In this context, though, Krikorian makes another startling argument: There is little difference, cost-wise, to the American taxpayer between an unskilled legal immigrant and an illegal one. And the statistics he presents are compelling.

Krikorian reveals the provisions of the 1994 Republican congressional candidates' Contract with America that restricted government payouts to immigrants have largely been ineffective. Since children's welfare was involved in many cases (people who immigrate naturally tend to be of child bearing age), cutting off benefits became problematic on the ground.

There is, however, one thing illegal immigration has definitely overwhelmed — and that's the discussion. With an estimated 12 million illegal aliens in the United States, most people think the discussion should start there — and, for spineless politicians, it's a convenient place for the discussion to end.

Ultimately, Krikorian proposes what he calls a "Pro-Immigrant Policy of Low Immigration," which would include English instruction and other programs to support assimilation.

Some careful conservative reviewers are tempering their reviews with a backhanded compliment of "Agree or disagree, you have to give Krikorian credit for starting the debate." Krikorian deserves much more credit than that.

The New Case Against Immigration is a carefully written and intellectually rigorous book capable of redefining the debate. At the very least, Krikorian's arguments deserve real answers from those on the other side.
Posted by jtf at 8:56 PM