Why the left is scared to death of McCain's running mate. 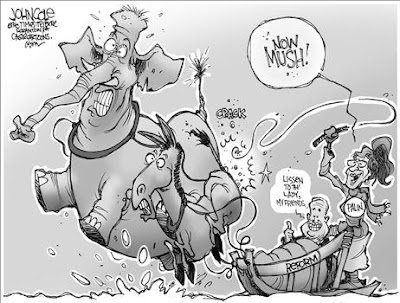 A spectre is haunting the liberal elites of New York and Washington--the spectre of a young, attractive, unapologetic conservatism, rising out of the American countryside, free of the taint (fair or unfair) of the Bush administration and the recent Republican Congress, able to invigorate a McCain administration and to govern beyond it.

That spectre has a name--Sarah Palin, the 44-year-old governor of Alaska chosen by John McCain on Friday to be his running mate. There she is: a working woman who's a proud wife and mother; a traditionalist in important matters who's broken through all kinds of barriers; a reformer who's a Republican; a challenger of a corrupt good-old-boy establishment who's a conservative; a successful woman whose life is unapologetically grounded in religious belief; a lady who's a leader.

So what we will see in the next days and weeks--what we have already seen in the hours after her nomination--is an effort by all the powers of the old liberalism, both in the Democratic party and the mainstream media, to exorcise this spectre. They will ridicule her and patronize her. They will distort her words and caricature her biography. They will appeal, sometimes explicitly, to anti-small town and anti-religious prejudice. All of this will be in the cause of trying to prevent the American people from arriving at their own judgment of Sarah Palin.

That's why Palin's spectacular performance in her introduction in Dayton was so important. Her remarks were cogent and compelling. Her presentation of herself was shrewd and savvy. I heard from many who watched Palin--many of them not predisposed to support her--about how moved they were by her remarks, her composure, and her story. She will have a chance to shine again Wednesday night at the Republican convention.

But before and after that, she'll be swimming in political waters infested with sharks. Her nickname when she was the starting point guard on an Alaska high school championship basketball team was "Sarah Barracuda." I suspect she'll take care of herself better than many expect.

But the McCain campaign can help. The choice of Palin was McCain's own. Many of his staff expected, and favored, other more conventional candidates. The campaign may be tempted to overreact when one rash sentence or foolish comment by Palin from 10 or 15 years ago is dragged up by Democratic opposition research and magnified by a credulous and complicit media.

The McCain campaign will have to keep its cool. It will have to provide facts and context, and to hit back where appropriate. But it cannot become obsessed with playing defense. It should allow Palin to deal with the charges directly and resist the temptation to try to shield her from the media. Palin is potentially a huge asset to McCain. He took the gamble--wisely, we think--of putting her on the ticket. McCain's choice of Palin was McCain being McCain. Now his campaign will have to let Palin be Palin.

There will be rocky moments. But they will fade if the McCain campaign lets Palin's journey take its natural course over the next two months. Millions of Americans--mostly but not only women, mostly but not only Republicans and conservatives--seemed to get a sense of energy and enjoyment and pride, not just from her nomination, but especially from her smashing opening performance. Palin will be a compelling and mold-breaking example for lots of Americans who are told every day that to be even a bit conservative or Christian or old-fashioned is bad form. In this respect, Palin can become an inspirational figure and powerful symbol. The left senses this, which is why they want to discredit her quickly.

A key moment for Palin will be the vice presidential debate, to be held at Washington University in St. Louis on October 2. One liberal commentator--a former U.S. ambassador and not normally an unabashed vulgarian--licked his chops Friday afternoon: "To steal an old adage of former Secretary of State James Baker .  .  . putting Sarah Palin into a debate with Joe Biden is going to be like throwing Howdy Doody into a knife fight!"

Charming. And if Palin holds her own against Biden, as she is fully capable of doing? McCain will then have succeeded in combining with his own huge advantage in experience and judgment, a politician of great promise in his vice presidential slot who will make Joe Biden look like a tiresome relic. McCain's willingness to take a chance on Palin could turn what looked, after Obama's impressive speech Thursday night in Denver, like a long two months for Republicans and conservatives, into a campaign of excitement and--dare we say it?--hope, which will culminate on November 4 in victory.
Posted by jtf at 2:00 PM