On Sunday, Democratic delegates convening in Denver were prayed over by representatives of various faiths. One stood out: Ingrid Mattson, president of the Islamic Society of North America. With this choice, Barak Obama's campaign has committed a strategic error of the first order.

After all, the Islamic Society of North America (ISNA) has been identified by the Department of Justice not only as a front for the Muslim Brotherhood - a global Islamist movement with the stated mission in America of "destroying Western civilization from within." Worse yet, it has also been named as an unindicted co-conspirator in the United States' largest alleged terrorism financing conspiracy. 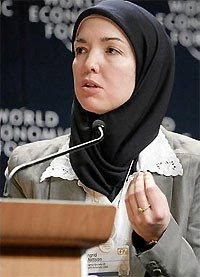 Like other Brotherhood operations, ISNA's purpose is to promote what might be called "soft jihad" - the task of steadily insinuating the brutally repressive and subversive program the Islamists call Shariah through da'wa, proselytizing and social networking.

The more one learns about Dr. Mattson and her organization, the more questions will be raised about Barak Obama's judgment and that of his party in affording them a prominent role in the 2008 Democratic convention. For example:

Ingrid Mattson is director of the Macdonald Center for the Study of Islamic Studies and Christian-Muslim Relations at the Hartford Seminary in Connecticut . Her program is used to credential Muslim chaplains for U.S. prisons and our military. (The armed forces require its chaplain candidates to take 72 credit hours from Dr. Mattson's program.) This credentialing was previously performed by organizations founded by Abdurahman Alamoudi, once among the most prominent Muslim Brotherhood operatives in America. Today, Alamoudi is serving a 23-year prison sentence for his involvement in terrorism-related crimes.

A course taught by Mattson at the Hartford Seminary entitled "The Koran and Its Place in Muslim Life and Society" featured readings from texts by two of the Islamofascist ideology's most revered figures: Syed Abul A'la Mawdudi and Sayyid Qutb. She has publicly credited the former with producing "probably the best work of [Koranic commentary] in English." As Robert Spencer has observed in his invaluable Jihad Watch blog, Maududi succinctly described the Islamists' Shariah agenda as follows:

"Islam wishes to destroy all states and governments anywhere on the face of the earth which are opposed to the ideology and program of Islam regardless of the country or the nation which rules it. The purpose of Islam is to set up a state on the basis of its own ideology and program, regardless of which nation assumes the role of the standard bearer of Islam or the rule of which nation is undermined in the process of the establishment of an ideological Islamic State....Islam does not intend to confine this revolution to a single State or a few countries; the aim of Islam is to bring about a universal revolution."

As to Qutb, an amicus brief filed last week by the Center for Security Policy before the 7th Circuit Court of Appeals noted that his "writings expand on [Maududi's] theme of Jihad against wayward Muslim regimes and the infidel West and the establishment of a hegemonic Shariah-based political order. His work has been credited as a central doctrinal source for al Qaeda's doctrine of Jihad, as well." According to the brief prepared for the Center by two of the West's foremost scholars of Shariah, attorneys David Yerushalmi and Stephen Coughlin (resident expert on the subject for the Joint Chiefs of Staff until he was purged by an ISNA admirer in the office of Deputy Secretary of Defense Gordon England), "Da'wa is used to prepare the battle space for violent Jihad."

Unbeknownst to most Americans, such Da'wa is being systematically advanced through the Islamists' take-over of the vast majority of U.S. mosques, Islamic centers and madrassas (Muslim parochial schools). This onslaught is being accomplished as Saudi money flows through another Muslim Brotherhood front spun off by ISNA, the North American Islamic Trust (NAIT), which acquires the mortgages of existing religious facilities or creates new ones. Along with titles to these properties comes Saudi Wahhabi influence in the form of virulently Shariah-adherent clerics, textbooks and other materials. In her capacity as president of ISNA, Mattson also is an ex officio member of NAIT's board.

Insofar as the Muslim Brotherhood explicitly seeks and is working for the destruction of our government and Western civilization more generally, it is engaged in a criminal conspiracy that constitutes treasonous sedition. That reality has two critical implications:

First, the Brotherhood must be formally designated a terrorist organization, putting an end to the reckless notion - promoted by, among others, the U.S. State Department - that practitioners of soft jihad are less dangerous and an effective antidote to co-religionists who are prepared to use violence immediately, rather than later on.

Second, under 18 US Code 2382: " Whoever, owing allegiance to the United States and having knowledge of the commission of any treason against them, conceals and does not, as soon as may be, disclose and make known the same to [appropriate officials] is guilty of misprision of treason and shall be fined under this title or imprisoned not more than seven years, or both."

Senator Obama, his party, Bush administration officials and, for that matter, ordinary citizens of the United States are obliged to take steps to counteract seditious Muslim Brotherhood activities in our midst. To do otherwise is not just suicidal. It is a crime.

- Frank J. Gaffney, Jr. is the founder, president, and CEO of The Center for Security Policy. During the Reagan administration, Gaffney was the Assistant Secretary of Defense for International Security, the Deputy Assistant Secretary of Defense for Nuclear Forces and Arms Control Policy, and a Professional Staff Member on the Senate Armed Services Committee, chaired by Senator John Tower (R-Texas). He is a columnist for The Washington Times, Jewish World Review, and Townhall.com and has also contributed to The Wall Street Journal, USA Today, The New Republic, The Washington Post, The New York Times, The Christian Science Monitor, The Los Angeles Times, and Newsday.
Posted by jtf at 8:47 AM