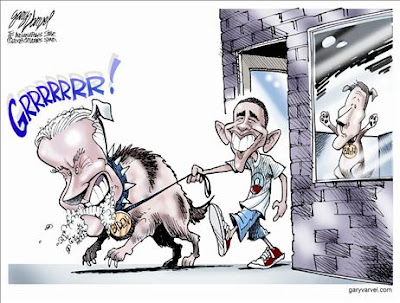 Barack Obama has deni grated Washington experi ence, pooh-poohed tradi tional foreign-policy credentials and rued negative tit-for-tat exchanges in campaigns - in fact, these things were close to the core of Obama's message during the past year. Note the past tense.

When it came time to choose a running mate, Obama went with a senator who has been in Washington for 35 years, who earned his foreign-policy chops in years of Senate Foreign Relations Committee hearings and Council on Foreign Relations meetings, and who is known for rhetorical belligerency. Plus, he voted for the Iraq War, the very lapse in judgment that is supposed to disqualify John McCain from the presidency.

Joe Biden's selection means the Obama phenomenon has definitely experienced its Thermidor, hints of which we'd already seen in his decision - despite all his good-government professions - to opt out of public financing and in his centerward policy adjustments since the primaries.

It turns out you've got to break a few eggs to make change. If it means disregarding central contentions of your candidacy, well, maybe that was all boob bait for impressionable young people and highly educated voters fond of lovely abstractions.

Obama surely would have loved to have picked a Gov. Tim Kaine of Virginia, a fresh leader from outside Washington who would have made the ticket all about change and a new generation of Democratic leadership. Alas, somewhere between Berlin and Georgia - as his polls numbers sagged and Democrats got nervous - Obama was brought face to face with his weaknesses and made a defensive choice to try to fill them.

The dream of waltzing to election on a rhetorical symphony of audacity and hope has been mothballed.

As Biden said of Obama in Springfield, Ill., in a new kind of testimonial, "This man is a clear-eyed pragmatist who will get the job done." That depiction of Obama would have set fewer hearts aflutter back in Iowa, but, as Democrats make their case in Denver, proving it to be so is imperative if Obama is going to win middle-class voters more concerned about their cost of living than inspirational flights of oratory in their next president.

The theme of Obama's introduction of Biden in Springfield could have been "all the things I'm not": a man who "has stared down dictators and spoken out for America's cops and firefighters," who is "one of America's leading voices on national security," who has "decades of steady work across the aisle," and "who is ready to step in and be president."

Listening to Obama tick off Biden's accomplishments, one could wonder how it was logically possible for both these men to be ready to be president - the elder statesman and the neophyte who's been in the Senate less than four years, most of them spent campaigning for president.

Obama also - in another defensive move - emphasized Biden's lunch-bucket roots. As the scrappy kid from Oahu, Hawaii ("the most removed population center on the planet," says The Washington Post), Obama wants to squeeze every ounce of working-class street cred he can from Biden, the scrappy kid from Scranton, Pa.

If we've learned anything about presidential politics during the past 40 years, it's that America elects Democrats who are moderates from the South. If Obama's going to buck that truism, he has to descend from the clouds and make a connection with average voters - not as the messianic figure of the Democratic primaries or his Berlin speech, but as the "cleareyed pragmatist" of Biden's Springfield remarks. Obama's ultimate task in the Mile High City is to come down to Earth.

comments.lowry@nationalreview.com
Posted by jtf at 10:09 AM