No Happy Ending in Dickensian Baltimore 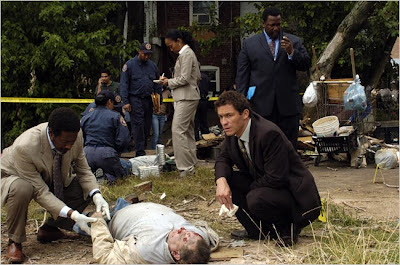 ANOTHER swath of society — this time the fourth estate — has fallen into the ecosystem of ‘‘The Wire,’’ bringing with it another set of not-so-great expectations.

The new executive editor of the ailing Baltimore Sun says he wants a prizewinning series about the “Dickensian” lives of children let down by the city school system, but without a lot of complexity or boring context.

“We need to limit the scope,” the editor, James C. Whiting III (Sam Freed), instructs his skeptical, dispirited editors, “not get bogged down in details.”

Whiting, a frontman for a Tribune-like media company, devalues the word Dickensian, stripping it down to a synonym for abject poverty, instead of a world of stark contrasts with unlimited scope and a rich, teeming bog of detail. If anything, he and his henchmen are the Dickensian characters in the room — Gradgrinds in suspenders and J. Press shirts demanding that reporters do “more with less.”

The word is also a nudge at fans who liken “The Wire,” David Simon’s layered, intricate HBO series about Baltimore cops and drug dealers to a sprawling 19th-century novel, as lurid and engrossing as “Bleak House” or “Little Dorrit.”

They won’t be disappointed. The fifth and final season of “The Wire,” which begins Sunday night, sinks deep into the Simonian bog, adding a new strand of narrative — the city room of a failing newspaper — to the dealers, cops, addicts, teachers and city officials who collide, and sometimes collude, but mostly bump up helplessly against immutable barriers of corruption, inertia and economic decline.

This season, like all the others, ‘‘The Wire’’ taps into a cold, cold place with many losses and few gains, a sub-zero-sum game.

The show’s gloomy fatalism is echoed in the real-life fate of a series that this week picks up where it left off: The drug trade changes hands, but never stops, and ‘‘The Wire,’’ which is unquestionably one of the best and most original series on television in decades, has never received an Emmy Award in a universe where “Boston Legal” has five and “Desperate Housewives” has six.

This series’s greatest distinction is perhaps the very thing that chases away broad popularity and peer recognition: ‘‘The Wire’’ traces the interlaced lives of drug dealers and police officers, and both sides of the street receive equal time and consideration. No other series has as many African-American characters, and some of most richly conceived ones fall into categories — drug dealers, convicts and addicts — that violate television’s taboo against racial profiling. By defying the very stereotypes it perpetuates, the show confounds easy viewing.

And in the inverted logic of ‘‘The Wire,’’ failure is its own success, a badge of honor in a decaying and dishonorable world. The series’s creators never received the acclaim their work deserves, and there are no lasting victories on ‘‘The Wire,’’ just glimmers of success that tease out hope only to be quickly and brutally squelched.

It’s a difficult show to follow, and not only because much of the dialogue is unvarnished street slang or because there is no thumping musical score to signal imminent menace or a character’s inner thoughts. (The only pop tunes are from a jukebox in a bar or the car radios of assassins staking out their victims.)

The series doesn’t revolve around one charismatic protagonist the way “The Sopranos” did. It doesn’t harbor a central mystery like the one in “Lost,” one that binds together a huge cast of characters. “The Wire” takes its title from the police wiretap surveillance that keeps detectives just within reach of a major bust; the series eavesdrops on a complicated, harsh and unexamined sector of American life, without subtitles or footnotes.

Like other transporting works of fiction, ‘‘The Wire’’ offers an insular, absorbing universe with its own language, rules of behavior and castes, not casts, of characters. It is one of the most intimate and alarming depictions of urban America on television, and yet it’s an invigorating and even exhilarating experience, each season a new Harry Potter book for adults. Instead of magic “The Wire” traffics in realism and the romance of failure.

Or, as Prez, a cop turned teacher said last season while describing a football game: “No one wins. One side just loses more slowly.”

Characters come and go from season to season, but institutions never change.

Police detectives, teachers or journalists who try to innovate are quickly slapped down by their employers’ entrenched, ill-fitting definitions of success. And all institutions are alike: Schools need higher test scores for financing; corner dealers need to up their numbers; police pump up minor arrests to meet their quotas; and newspapers lay off seasoned, responsible reporters to cut costs and shape articles to the expectations of the Pulitzer Prize committee.

Jim Whiting thinks the paper could win a prize with a searing exposé on the failure of the Baltimore school system. He dismisses his editors’ warnings that the problems of the city’s underprivileged children are more deep rooted than burned-out teachers and outdated textbooks.

Viewers know better. The fourth season zeroed in on the lives of four street kids, and, among other things, vividly illustrated how economic conditions, broken families and social dissolution scar children long before they take their first standardized test. Mr. Simon, who was a Baltimore Sun crime reporter when the newspaper was still prestigious, is using his last season to settle new scores, excoriating the newspaper owners who allow their journalism standards to decline along with their revenues.

Each season takes on a different theme, but all of them are linked and laid out like a rhyming scheme. Parallelism has always been a hallmark of “The Wire.” The street dealers have the same kinds of constraints and personality clashes as the police officers who chase them, and even the mayor has to wend his way around the machinations of a Republican governor in Annapolis.

This time it’s the journalists of The Baltimore Sun, whose straits reflect those of the Baltimore police. Police officers of every rank are owed weeks of overtime pay, and budget cuts have taken their toll on even the most important cases, including the “wire.” Jimmy McNulty (Dominic West), who is back on detective duty, off the wagon and as frustrated as ever by the system, mutters, “I wonder what it feels like to work in a real police department.”

The first glimpse of the newspaper is an empty loading dock where old-timers gather to smoke and gossip about expected buyouts and layoffs. “Some day,” one of them says, tossing away his cigarette butt, “I want to find out what it feels like to work on a real newspaper.”

Inside every flawed and failing institution, there are a few who do the best they can. Clark Johnson, who played a Baltimore detective on “Homicide,” an NBC drama that was based on Mr. Simon’s nonfiction book by the same name, plays Gus, the Sun’s cynical but dedicated city editor. Despite closed foreign bureaus, staff cuts and highhanded interference by new bosses who value “readability” over truth, Gus struggles to meet deadlines, source article properly and prevent the misuse of a gerund.

The staff is worried and disgruntled, but one reporter is eager to meet management’s expectations. Scott (Tom McCarthy) is a recent hire from The Kansas City Star, and chafing under Gus’s by-the-book guidance he strains the truth for splashy stories that could catapult him to The Washington Post or The New York Times.

This season weaves the symbiotic relationship between the news media and the police into a larger tapestry of daily life on the streets, where old rivalries and unforgiven slights hobble even the most ruthless and ambitious leaders, and small acts of kindness stand out like shooting stars, all the more impressive for being rare.

“If you leave everything in,” Whiting pompously tells his editors, “soon you have nothing.” The final season of ‘‘The Wire’’ is committed to proving him wrong; by leaving nothing out it offers viewers as close a chance as anyone can get to everything.
Posted by jtf at 10:10 AM