Goose Gossage gets Hall of Fame call after nine-year wait 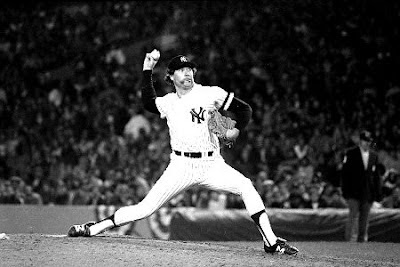 Stubblebine/AP
Goose Gossage's intimidating presence on the mound helped pave the way for his Hall of Fame career.

When the call from Baseball Writers Association secretary-treasurer Jack O'Connell came to his home in Colorado Springs at 1:45 Tuesday afternoon, Rich (Goose) Gossage, the most fearsome and intimidating closer in the history of baseball, was reduced to emotional mush and "numbness."

It had been a nine-year wait, made even more frustrating when his mother died in 2006. But now that he was officially minted as the 199th player elected to the Hall of Fame (and only the 106th elected by the baseball writers) out of the more than 16,000 that ever played in the majors, with an impressive 466 votes and 85.8 plurality, Gossage conceded the wait was well worth it.

"It was very emotional, off-the-charts emotional," Gossage said of receiving the news that he was the only player elected with a total of 543 votes. "The waiting has made it sweeter, more special than even going in on the first ballot."

Once he got over the disappointment of not being elected in time for his mother to see it, Gossage came to realize the Hall of Fame voting is a process in which only the no-brainer "automatics" such as Cal Ripken, George Brett, Tony Gwynn and Tom Seaver get punched non-stop tickets to Cooperstown while others, like himself, must endure being evaluated from ballot to ballot. And in Gossage's case, the process was even more complicated by the fact that only in recent years have the voting baseball writers come to better appreciate the fine art of relief pitching.

"I've been saying for a long time, ‘Please don't compare me to the modern day relievers,'" Gossage said. "It's apples and oranges." 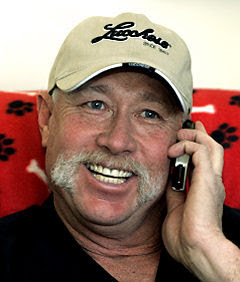 Andrieski/AP
Gossage gets his Hall call and smiles about a career ... 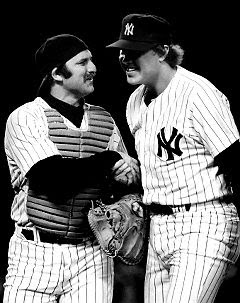 Requena/Getty
... in which he shared many a great moment with Thurman Munson (l.).

He gets no argument on that. While a typical save today occurs when a closer is brought into the game to start the ninth inning, 52 of Gossage's 310 career saves were accomplished by getting seven outs or more. In terms of so-called "tough saves" (in which the closer comes into the game with the tying run on base), Gossage converted 81. Only fellow Hall of Famer Rollie Fingers (101) had more, and as of last year, Mariano Rivera had only 28. And while Rivera is regarded as the preeminent closer of this modern era, the most innings he has ever logged in a season as a closer is 80 2/3. In Gossage's 1975-85 heyday, he pitched more than 100 innings in a season five times and more than 90 twice.

But, like he said, it was a different game back then. And when Chuck Tanner, his manager with the Chicago White Sox, first approached him in 1975 about taking his limited (but lethal) repertoire of sliders and 98-plus mile per hour fastballs to the bullpen, Gossage was game but skeptical.

"You have to understand, back in 1972 you didn't want to be part of the bullpen," he said. "It was looked upon as a junk pile of starters who could no longer start. But I feel fortunate to have been part of the entire evolution and the pioneering of relief pitching. Going to the bullpen was the best thing that could have ever happened to me. I can't even fathom having a career as a starter as I did as a reliever. For one thing, I didn't like the four days off (between starts) and I loved the opportunity to come to the ballpark to pitch every night."

Gossage, 56, said that in his formative years with the White Sox, '72-'76, the three most influential people in his career were Tanner, pitching coach Johnny Sain and, of all people, free-spirited and mercurial slugger Dick Allen.

"Dick Allen took me under his wing and taught me how to pitch from a great hitter's standpoint," Gossage related. "Chuck had huge influence in that he taught me the game from A to Z and Johnny Sain taught me a changeup and later a ‘slurve' because I didn't really have any breaking pitches. After that, my career really began to spiral."

No more so than when he came to the Yankees as a free agent after the 1977 season in what he says was a dream come true for a kid who grew up a Yankee fan in Colorado. In his seven years with the Yankees, he led the AL in saves twice - again when saves were saves - striking out 512 in 533 innings. And his biggest save, he said, will always be the 2 2/3 inning effort against the Red Sox in the '78 playoff game.

"When I put on the pinstripes in 1978 it was like an out-of-body experience," Gossage said. "I had grown up watching them with my dad on TV in the Saturday "Game of the Week" with Dizzy Dean and Pee Wee Reese and we didn't miss a game. I played with nine teams, but there was nothing like playing for the Yankees. The '78 playoff game against the Red Sox was the biggest game I ever pitched in, and it's too bad there had to be a loser. After that, the playoffs and Series were anti-climatic. The saddest of my Yankee tenure was that last year (1983) when all that stuff with Billy (Martin) was going on and I just needed a change of scenery. The fun had been taken out of the game for me."

George Steinbrenner, who obviously played a large role in the turmoil that led to Martin's departure, congratulated Gossage through a statement issued by Yankee PR guru Howard Rubenstein. "The New York Yankees are very proud of his achievement and I, personally, would like to congratulate him and his family on this wonderful honor!" the statement said.

But even though he will be inducted into the Hall on July 27 with Dick Williams, his manager with the San Diego Padres whom he considers the best he ever played for, Gossage will go in as a Yankee.

For it was in the Bronx where Gossage's legend - the menacing scowl, the Fu Manchu mustache that bordered on defiance of Steinbrenner's no facial hair code, the Goose's snorting, flailing delivery - took full bloom only to reach a long overdue fruition Tuesday.

A look at Goose Gossage's Hall of Fame resume: