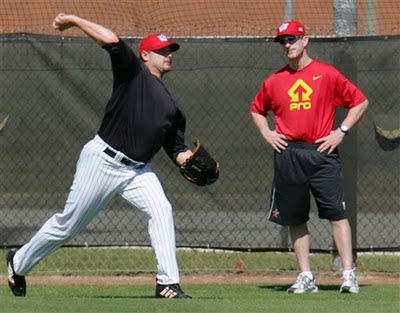 In a defamation lawsuit filed Sunday night, Roger Clemens claims Brian McNamee, his longtime trainer and chief accuser of steroid abuse, was threatened with jail if he didn't connect the pitcher to steroids.

"I don't know if I'll ever get the naysayers back. I don't know what I'm going to get. Maybe some of my name back," a frustrated Clemens said Sunday. Clemens said this lawsuit will not keep him from testifying before Congress, which he plans to do without asking for immunity or invoking any rights.

The former Houston Astro is being called to testify about McNamee's allegations that the trainer injected Clemens with steroids and human growth hormones between 1998 and 2001.

The lawsuit doesn't request a specific dollar amount and Clemens' Houston lawyer, Rusty Hardin, said they filed the suit not to get money, but to clear Clemens' name and discover how the allegations against Clemens came about.

Hardin said they want to learn exactly what was done and not done by federal agents and other investigators who helped U.S. Sen. George Mitchell implicate Clemens in a report on steroid use for Major League Baseball.

"This has ruined Roger's reputation with a large percentage of the public," said Hardin.

"All of McNamee's accusations are false and defamatory per se," the lawsuit states. "They are not true, and they injured Clemens' reputation and exposed him to public hatred, contempt, ridicule, and financial injury. McNamee made the allegations with actual malice, knowing they were false."

Clemens' lawsuit also asks a Texas court to declare that he has not defamed McNamee. McNamee's New York lawyers have threatened to sue Clemens for defamation, depending what Clemens said on 60 Minutes.

Hardin said Clemens, following the advice of his lawyer, agents and others, waited almost a month since the Mitchell Report was made public to sue McNamee.

"We kept thinking McNamee might change his mind and come to his senses and admit he was lying," Hardin said. But, Hardin said, instead McNamee arranged to talk to Clemens Friday and, rather than getting back to Clemens as promised, their conversation was leaked "with spin" to Newsday.

The lawsuit first details all the McNamee allegations in the Mitchell Report. The lawsuit said a link between steroids and Clemens' success "is untrue and maliciously ignores Clemens' consistent record-setting performances before and after" the years McNamee alleges the wrongdoing.

In the suit, the careers of Clemens and McNamee are chronicled, including that they met in 1998 and "discovered a shared intensity for grueling, military-style workouts." It lists Clemens' formidable litany of successes before and after the McNamee allegations.

Hardin said the idea is to assess the history and credibility of both Clemens and McNamee. Clemens' suit does not favor McNamee, of course.

The lawsuit notes that McNamee was a suspect, but never charged, in an alleged date rape in Florida in 2001. The New York Times has mentioned the accusation and McNamee's lawyer, Earl Ward, noted no charges were filed. A Florida prosecutor concluded there was insufficient evidence. The lawsuit and the New York paper state that the Florida investigation led to McNamee's termination from the Yankees as a trainer.

The lawsuit also includes a quote from a conversation Hardin's private investigators had with McNamee after the Mitchell Report was made public. The lengthy McNamee quote indicates he was persuaded to talk about Clemens after a federal prosecutor and agent threatened him.

According to the lawsuit, McNamee told Hardin's investigators a federal prosecutor and federal agent talked about how he already had two strikes against him for possessing and delivering steroids and could get a third — lying to a federal agent — and go to jail. He said it was soon after that he was asked "So what about Clemens?"

'Trying to defend my name'

McNamee is quoted as saying a federal agent said since McNamee trained Clemens, he should know that the pitcher was taking steroids. McNamee said a piece of paper was thrown at him and then the prosecutor spoke: "He goes, 'We know about (sic) more about you than you know about yourself.' He goes, 'You're going to jail.' My attorney just sat there. And they said 'Let's go back to when you first met Clemens in '98.' "

The lawsuit alleges McNamee said that after he said he injected Clemens with steroids, McNamee "magically" became a witness instead of a target in a criminal federal drug investigation that preceded the Mitchell Report.

The suit further states McNamee was threatened with being prosecuted if he didn't repeat his story to the Mitchell Commission in a "cold war era interrogation" where the trainer was asked to agree after a federal agent read his previous statements.

Hardin said Clemens has taken the advice of his lawyer and others in working to clear his name. He said the lawsuit doesn't accuse Mitchell or Major League Baseball because there isn't information to show anyone but McNamee defamed Clemens.

Clemens said he was reluctant to file the lawsuit and has been unhappy with this entire episode.

"I'm going to shell out millions trying to defend my name," said Clemens.

Clemens mentioned a 2006 Los Angeles Times story that falsely connected him with steroids but has since been shown to have been based on a legal document that didn't mention the pitcher at all.

"When you see the people who are absolutely trashing me and my name and my family, like I said, after a year with the LA Times, at the end of the day I got an apology. Maybe I'll get that again. Maybe I'll get an apology that 'I'm sorry about the lies. I'm sorry that we did what we did,' " Clemens said.