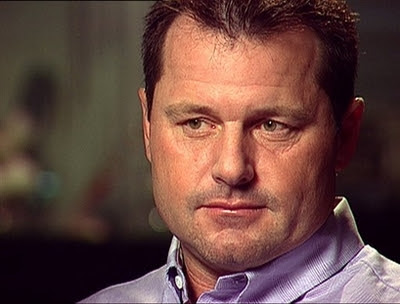 In this image captured from video and released by CBS News on Thursday, Jan. 3, 2008, baseball player Roger Clemens is seen at his Katy, Texas home, on Friday, Dec. 28, 2007, while giving his first interview since being accused of using performance-enhancing drugs by his former trainer in the Mitchell Report. During the interview, aired on CBS's '60 Minutes' Sunday, Jan. 6, 2007, Clemens said he might be willing to take a lie-detector test, was 'shocked' close friend Andy Pettitte used human growth hormone and said — again — that he probably will retire.
(AP Photo/CBS News, HO)

You indignantly wondered why you haven't been given the benefit of the doubt. OK, Roger, we'll go over it one more time.

Your trainer of 10 years, a man named Brian McNamee, a man with zero incentive to lie, says he injected you with steroids and human growth hormone at least 16 times over a period of several years.

Your training partner and closest friend in baseball, Andy Pettitte, has acknowledged that McNamee injected him with human growth hormone. Even those of us who want to believe you are having a hard time getting our minds around the notion that McNamee would tell the truth about Pettitte and lie about Roger Clemens.

You allowed McNamee's side of the story to go unchallenged for far too long. You looked guilty by doing that even if you weren't guilty.

Your explanation that McNamee had injected you with lidocaine makes no sense. Where did you obtain lidocaine? It's only effective if injected directly into the joints, and it's highly unlikely a trainer would even attempt to give that kind of shot.

Then again, maybe you should have kept your mouth shut. This story is spinning out of control, to something far more serious than an aging ballplayer bending the rules to extend his career.

Now Congress wants you to tell your story under oath. Even worse, Newsday is reporting that IRS special agent Jeff Novitzky is interested in you.

Novitzky is the guy who investigated Barry Bonds and Marion Jones. He's a pit bull of an investigator and about the last person on earth you want looking into your business.

All that said, you did a nice job in that interview with Mike Wallace that aired Sunday night on 60 Minutes.

Considering how you followed a hit man, you had it easy. OK, bad joke.

This is the interview you should have done 15 minutes after the Mitchell Report was released. You were forceful and angry and believable.

If someone had been on the fence at the beginning of the interview, you might have persuaded them to believe you. Why did you wait so long? Your reputation was irreparably harmed by your silence.

Wallace asked the basic questions, and you stumbled only when asked about the lie-detector test. You seemed ready to agree to one, then said something about it not changing anyone's mind.

You told the Chronicle in an interview Sunday that you want to tell your story under oath before Congress.

Wallace didn't know enough to ask specifics about lidocaine. Nor did he press you on Pettitte.

That's a tough one. You and Pettitte spent hours training with one another. To think Pettitte would have taken such a significant step without you knowing is a stretch.

Those are questions you should be prepared for at this afternoon's news conference.

You and McNamee reportedly had a long telephone conversation Friday night. That chat will come up today as well.

But you did fine. Your answers didn't sound rehearsed, and considering that it might always be your word against his, you did the best you could, all things considered.

"I was shocked. I was angry. I had a lot of emotions."

"I think the people that know me believe me and understand what I'm about."

Here's hoping the people closest to you still believe in you. One of the things you told Wallace that sounded so sad is how you understand your good name is gone forever.

For 25 years, you were as respected as any player in the game. You were an amazing competitor and a good teammate. You were the best for a long list of reasons.

Maybe those teammates understand why you might have done what McNamee says you did. Baseball's owners and your union put players in a tough ethical quandary because they seemed to look the other way as steroid use soared.

Players would show up at spring training and lose their jobs to guys who had added 20 pounds of muscle. At the time McNamee says he first injected you with steroids, you looked like a guy facing the end of the road.

If McNamee is to be believed, you did what a lot of us would have done. Now you're fighting a battle you might not be able to win. During games, you were at your best when things looked hopeless. You worked hitters, umpires, crowds. You almost always found a way. You haven't shown the same kind of doggedness this time. You want the benefit of the doubt, but you haven't behaved like someone who deserves it.

"Twenty-four, 25 years, Mike," you said on television Sunday. "You'd think I'd get an inch of respect. An inch."

richard.justice@chron.com
Posted by jtf at 7:39 AM