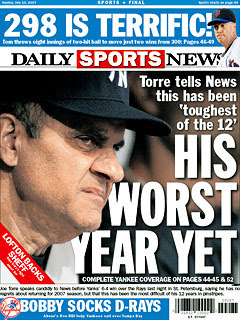 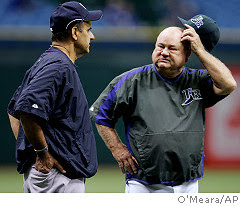 ST. PETERSBURG - Joe Torre's first year in pinstripes read like a Hollywood script, the story unfolding just the way he must have always imagined it could - veteran manager in the starring role, leading the proud New York Yankees back to the World Series.

But that was 1996 and if 2007 turns out to be Torre's final year at the helm of George Steinbrenner's very expensive production - his contract does expire after the season - there is sure to be quite a different ending.

The Yankees have struggled this season, battling on a daily basis to stay in the postseason picture. The losing has led to one controversy after another, from contract issues surrounding some of the team's top players, to the constant speculation regarding Torre's own job security.

On the surface, it appears as though none of it has pierced Torre's thick skin. Still, Torre admitted to the Daily News last night that this has been the most difficult season he has endured in New York. If his magical ride in his hometown ends on the sourest of notes, Torre seems ready to deal with that.

"It's been the toughest one of the 12 years, no question," Torre said. "My security blanket is the players, because they care and they try. Sometimes they lose direction, but that's been the thing I cling to all the time - the baseball aspect of it."

Friday's revelation that Gary Sheffield told HBO Torre treated black players differently than white players didn't cause much of a stir in the Yankees' clubhouse, but the comments did add another awkward chapter to what is looking like Torre's final season as the team's manager.

"I don't pay attention to that stuff," Torre said. "I know who I am, so I don't really concern myself with it."

At the end of April, with the Yankees floundering at 9-14 after losing a series to the Red Sox, Torre's job status was tenuous at best. Steinbrenner was talked out of making any rash moves, but his message was clear: win or else.

As a veteran manager who knows the drill in New York, Torre recognized the need to deal with the subject of his job status, but that didn't make it any more fun for him to discuss.

"It's a domino effect. Losing is tough enough, but having to explain it when a lot of times you can't explain it, that's tough," Torre said. "Then you throw in the issue of, 'Are you afraid of losing your job?' and all of that, you have to address it and I understand it, but it gets a little old."

Torre has often been criticized for his stoic demeanor in the dugout, his critics claiming that his lack of visible fire has a negative effect on a struggling team.

Derek Jeter, who has played for Torre since 1996, believes in a general sense that the manager's composure is his greatest strength.

"He's the same way he's always been. That's what makes him so good," Jeter says. "When things are going bad, he still has that calm demeanor, even though he's as frustrated as any of us."

In early June, Torre let his frustrations out before a game in Boston, scolding the media after taking exception to a back-page headline in an early edition of the Daily News.

The headline - "Shut Up" - which dealt with Torre's criticism of Alex Rodriguez after A-Rod had distracted a Toronto player by yelling at him while he tried to catch a pop-up, caused a stir within the organization, with Steinbrenner calling GM Brian Cashman, wanting to know why his manager was openly criticizing the team's best player.

Aside from that incident, from Torre's conduct it has been hard to tell whether the Yankees are winning or losing.

"New York is a whole other beast," Jeter says. "Everything is dissected. Every move, every comment. That's tough to deal with, but he does it as well as anyone."

After coming close to losing his job last fall following the Yankees' first-round ouster by the Tigers, Torre told Steinbrenner that he wanted a chance to finish the job this year. Barring an incredible second-half surge, the Yankees' streak without a title will stretch to seven years, but Torre has no regrets about returning for this season.

"I'll never be sorry about that, because I was enthusiastic coming in," Torre says. "Just because things don't fall into place the way you want, you can't say, 'I wish I didn't do it.' If I didn't do it, I never would have known. If I had sat home, I'd have always wondered if I could have made a difference one way or the other."

As for whether an October without baseball in the Bronx would tarnish Torre's legacy in New York, that will be something for fans to decide. To Torre himself, nothing that could happen this season will take away from his experience with the Yankees.

"When I think about winning four out of five World Series, how the hell did that happen?" Torre says. "This game is very tough to be competitive all the time, and things like this happen. If it's my last year and this is the way it ends, it's not going to put a damper on my time here because so many good things have happened."

A failed season would probably serve as little more than a temporary blemish. Years from now, when Torre's No.6 hangs in Monument Park and he has been enshrined in the Hall of Fame, the 2007 season will be long forgotten.

"He'll get into the Hall of Fame right out of the box. First ballot, he'll be there," says Don Zimmer, Torre's longtime friend and former bench coach. "What, are people going to forget what he's done? Who would have ever thought that someone could manage the Yankees for 12 consecutive years? He ought to get a Purple Heart for doing that."