Mark Bradley: What do we make of this Michael Vick? 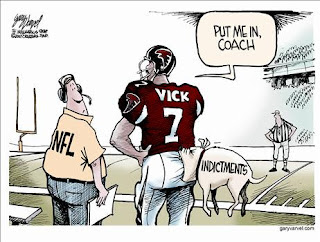 It’s no longer just an investigation. It’s an indictment. That isn’t to be confused with a conviction — the presumption of innocence still applies, or at least it should — but it’s now possible to wonder if Michael Vick’s career as a Falcon, once a bright and shining thing, is nearing its soiled and sorry end. It’s now possible to wonder if any of us has ever known the real Michael Vick.

An indictment means there’s a case against him. A case means a trial will be scheduled. A trial would mean he could go to jail.

An indictment also means Michael Vick has let a slew of people down. From Arthur Blank, who signed him to a new contract worth $130 million two days before Christmas in 2004; to Bobby Petrino, who came here largely because he wanted to coach him; to the teammates who put their trust in him; to every fan who has bought a No. 7 jersey and worn it with pride … none of those folks can look at Vick today the same way they did yesterday. The dynamics have changed. Reality has changed.

He’s no longer the guy who kept saying he was going to do the right things. He’s now the guy who has allegedly gotten one very big thing so wrong so often that a felony conspiracy charge has been brought against him. And while we must be mindful that an indictment offers only one side of the story and that all defendants are entitled to a vigorous defense, the 18 pages of this chilling document are, as my uncle Rob used to say, enough to make a grown man throw up.

From Page 4 of the indictment: “On or about June 29, 2001, Vick paid approximately $34,000 for the purchase of property located at 1915 Moonlight Road, Smithfield, Va. From this point forward, the defendants … used this property as the main staging area for housing and training the pit bulls involved in the dog fighting venture and hosting dog fights.”

From Page 12: “In or about March of 2003, [Purnell A.] Peace, after consulting with Vick about the losing female pit bull’s condition, executed the losing dog by wetting the dog down with water and electrocuting the animal.”

From Page 13: “In or about March of 2003, Vick retrieved a book bag from a vehicle containing approximately $23,000 in cash. The cash was provided to [cooperating witness] #2 as payment for winning both dog fight matches.”

On Jan. 4, 2003, Vick had led the Falcons to a playoff victory over Green Bay at storied Lambeau Field.

From Page 14: “In or about the fall of 2003, [the three other defendants] and Vick traveled from Atlanta, Ga., to South Carolina with a male pit bull named Magic to participate in a dog fight. … The purse of the dog fight was established at approximately $1,500 per side, for a total of approximately $3,000.”

On Aug. 16, 2003, Vick had broken his leg in an exhibition against the Baltimore Ravens. He wouldn’t return to play until Nov. 30 against Houston.

From Page 17: “In or about April of 2007, [two other defendants] and Vick executed approximately eight dogs that did not perform well in ‘testing’ sessions at 1915 Moonlight Road by various methods, including hanging, drowning and slamming at least one dog’s body to the ground.”

In April 2007, Vick was readying for his first mini-camp under his third NFL coach. He was a 26-year-old millionaire — since turned 27 — who had just walked away from a brush with authorities in the Miami airport.

But here he is today, the lead sports story from coast to coast not because he has taken the Falcons to the Super Bowl but because he has been indicted for, of all things, conspiring to fight one animal against another. Here he is, once the brightest light in the Atlanta sports firmament, now just another fallen star.

AJC.COM NOTE: Due to the volatile subject nature of the Vick investigation, this blog will be opened for comments on Wednesday morning. Thank you for your patience and cooperation.
Permalink Comments (314) Categories: Falcons / NFL, Mark Bradley