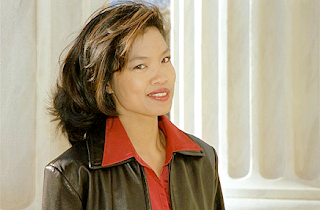 Michelle Malkin Archive
July 17, 2007
Michelle Malkin
http://www.deportthemnow.com/
My fellow Americans, we have a problem. We spend billions of dollars on homeland security, but our government can't even track and deport convicted criminal aliens. These are not the well-meaning "newcomers" who just want to "pursue economic opportunities" by "doing the jobs no one else will do." These are foreign-born thugs, sex offenders, murderers and repeat drunk drivers who are destroying the American Dream.
If our immigration and entrance system cannot effectively monitor, detain and kick out convicted criminal aliens—including illegal border-crossers, illegal visa overstayers, fugitive deportees, and green card holders who have committed serious crimes and aggravated felonies—what good is it?
The terrible kidnapping and murder of 12-year-old Zina Linnik in Tacoma, Wash., on July 4th is a typical example of the criminal alien revolving door. Terapon Adhahn, Linnik's suspected kidnapper and killer who allegedly snatched her from the backyard of her home, is a permanent legal resident from Thailand. He was convicted of incest in 1990. Adhahn had sexually attacked his 16-year-old relative and pleaded down from a second-degree rape. Two years later, he was convicted of intimidation with a dangerous weapon. Section 1227(a)(2)(C), Title 8, of the U.S. code dealing with immigration states: "Any alien who at any time after admission is convicted under any law of . . . using, owning, possessing, or carrying . . . any weapon, part, or accessory which is a firearm or destructive device . . . in violation of any law is deportable."
But Adhahn was not deported. In fact, as Lorie Dankers, spokeswoman for Immigration and Customs Enforcement in Seattle, admitted: "He escaped our attention." [Man linked to Zina case: Sex offender who escaped deportation, By Sean Robinson, The Tacoma News Tribune, July 13th, 2007]
Just like illegal alien gangster Mwenda Murithi, who was arrested 27 times without deportation before being arrested in the shooting death of 13-year-old innocent bystander Schanna Gayden last month in Illinois.
Just like illegal alien thug Ezeiquiel Lopez, who built up a six-year rap sheet without deportation before being arrested in the murder of Deputy Frank Fabiano two months ago in Wisconsin.
Just like illegal alien Juan Leonardo Quintero, who had been previously deported after committing crimes from indecency with a child to driving while intoxicated, but who traipsed back into the U.S. last fall and was arrested after allegedly shooting Houston police officer Rodney Johnson four times in the head during a routine traffic stop.
And the list goes on and on and on.
It is not "anti-immigrant radicals" who are fed up with the failure to kick out and keep out criminal aliens. Zina Linnik's uncle, Anatoly Kalchik, points out that his family was a family of legal immigrants who all obeyed the laws. The Seattle Post-Intelligencer reported: "Zina's uncle was angry that the suspect had not been deported after being convicted in a sex crime. 'We are all immigrants, but we come legally,' Kalchik said of his family. He added that the adults all cleared a criminal background check. 'If someone is a sex offender, or any kind of offender, he has no business being in America,' he said." [Police Looking At Zina Linnik Suspect For Similar Crimes By Hector Castro And Carol Smith July 14, 2007]
Federal auditors and immigration officers have tried to blow the whistle on this recurring problem for the past 10 years. But the Department of Homeland Security inspector general reported last year that of an estimated 650,000 foreign-born inmates in prison and jails this year, half will be removable aliens who won't be removed because the detention and deportation office "does not have the resources to identify, detain and remove" them.
And that's just a best guess. Despite federal mandates, cooperative agreements and endless political promises, there still is no working nationwide system in place with basic information about incarcerated criminal aliens.
Don't we have enough homegrown criminals without the added public safety menace of known, convicted criminal aliens being released from prisons and jails to disappear and commit more crimes?
Rep. David Price, a North Carolina Democrat, is sponsoring legislation to require monthly prison and jail checks by DHS to track incarcerated illegal aliens, increase spending on criminal alien deportations, and expand a program known as 287(g) to encourage more local and state officials to cooperate with the feds to help identify and deport criminal aliens in their hometowns.
Why the hell aren't we doing all this already? How many more innocent lives will be taken or ruined before we do?
After the defeat of the Bush-Kennedy amnesty bill last month, I received tons of e-mail from readers asking: "What can I do?" Answer: Don't wait for Washington. Sign up to help pressure our government to rid this country of convicted criminal aliens at http://www.deportthemnow.com./
For Zina. For Schanna. For Deputy Fabiano. For Officer Johnson. For our safety, sovereignty and the protection of the American Dream for those who deserve it.
Michelle Malkin [email her] is author of Invasion: How America Still Welcomes Terrorists, Criminals, and Other Foreign Menaces to Our Shores. Click here for Peter Brimelow’s review. Click here for Michelle Malkin's website. Michelle Malkin's latest book is Unhinged: Exposing Liberals Gone Wild.
COPYRIGHT CREATORS SYNDICATE, INC.
Posted by jtf at 12:30 PM