Jury's in on Bonds 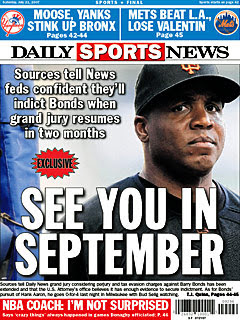 The grand jury investigating Barry Bonds has been extended for another six months, several sources familiar with the government's case have told the Daily News, and the U.S. Attorney's office in San Francisco is confident it will have enough evidence to secure an indictment once it resumes in September.

"They seem to feel they have a strong case," said one source, speaking on the condition of anonymity.

Another source said he believed prosecutors could secure an indictment if they sought one now, but that they would rather take the additional time to strengthen it. The grand jurors have not met for at least three weeks and have been instructed that they will not reconvene until September. Bonds is being investigated for perjury and tax evasion.

The U.S. Attorney's office would not comment, with officials saying they legally cannot confirm or deny the existence of a sitting grand jury.

There had been widespread speculation that federal prosecutors would seek an extension while they handle several other matters related to the case - Bonds is not their only target in the investigation - and while Anderson, Bonds' former trainer, remains in prison for refusing to testify.

A fan shows his disdain for Barry Bonds during last night's Giants-Brewers game.

Sources familiar with the government's investigation said the grand jury's term was extended before jurors were scheduled to meet Thursday.

That means Bonds probably will be able to catch and pass Hank Aaron's record of 755 career home runs without being under indictment. Bonds, who didn't homer in San Francisco's 8-4 victory last night in Milwaukee, remains at 753.

"I think politically it would look terrible if they indicted him when he was one or two home runs away from breaking the record," one attorney with knowledge of the government's case said. "I think they'll let him break the record but I'd be very surprised if they don't indict."

However, the decision to seek an indictment will not be left solely up to the prosecutors who have directed the case.

Experts believe the decision will be made by U.S. Dept. of Justice officials because the case has such a high profile. Scott Schools, the acting U.S. Attorney for the Northern District of California, has said he does not want the job permanently, and sources have said former U.S. Attorney Joseph Russoniello will be appointed to his old position when a lengthy background check is complete.

Bonds was called before the original BALCO grand jury in 2003, and he testified that he had taken drugs identified as steroids, but did not know what they were at the time. Part of his testimony was overheard by a Daily News reporter, and the full extent of it was reported a year later by the San Francisco Chronicle.

Prosecutors opened a perjury investigation into Bonds, believing that he long knew what he was taking.

Bonds' former girlfriend, Kimberly Bell, also testified that he had given her $80,000 in cash from memorabilia sales, income that may not have been declared. Bonds' attorney, Michael Rains, has said he does not believe the government will indict, but recently conceded it might choose to proceed. A year ago, when Bonds' first grand jury was due to expire, Rains told him to expect an indictment, but the government moved to have its investigation into Bonds and other BALCO-related defendants shifted to another grand jury that was set to expire this month.

Major League Baseball sources have said they believe that if Bonds is indicted, commissioner Bud Selig, who attended last night's game in Milwaukee, will suspend him, an action that is sure to meet resistance from the MLB Players Association. Even MLB sources concede they would probably lose a grievance before an arbitrator, but that Selig wants to force the union to defend a player known to have used steroids, whether he knew what he was taking or not.
Posted by jtf at 6:53 PM