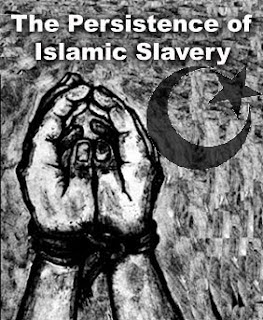 The International Criminal Court recently issued warrants for the arrest of Ahmed Haroun, the minister for humanitarian affairs of Sudan, and Ali Kosheib, a leader of that country’s notorious janjaweed militia. The Sudanese government has refused to hand over the two for prosecution. Charges include murder, rape, torture and “imprisonment or severe deprivation of liberty.” Severe deprivation of liberty is a euphemism for slavery. Egypt’s Al-Ahram Weekly observed not long ago that in Sudan, “slavery, sanctioned by religious zealots, ravaged the southern parts of the country and much of the west as well.”

Muslim slavers in the Sudan primarily enslave non-Muslims, and chiefly Christians. According to the Coalition Against Slavery in Mauritania and Sudan (CASMAS), a human rights and abolitionist movement, “The current Khartoum government wants to bring the non-Muslim black South in line with Sharia law, laid down and interpreted by conservative Muslim clergy. The black animist and Christian South has been ravaged for many years of slave raids by Arabs from the north and east and resists Muslim religious rule and the perceived economic, cultural, and religious expansion behind it.”

The BBC reported in March 2007 that slave raids “were a common feature of Sudan’s 21-year north-south war, which ended in 2005….According to a study by the Kenya-based Rift Valley Institute, some 11,000 young boys and girls were seized and taken across the internal border -- many to the states of South Darfur and West Kordofan….Most were forcibly converted to Islam, given Muslim names and told not to speak their mother tongue.” One modern-day Sudanese Christian slave, James Pareng Alier, was kidnapped and enslaved when he was twelve years old. Religion was a major element of his ordeal: “I was forced to learn the Koran and re-baptised “Ahmed.” They told me that Christianity was a bad religion. After a time we were given military training and they told us we would be sent to fight.” Alier has no idea of his family’s whereabouts. But while non-Muslims slaves are often forcibly converted to Islam, their conversion does not lead to their freedom. Mauritanian anti-slavery campaigner Boubacar Messaoud explains: “It’s like having sheep or goats. If a woman is a slave, her descendants are slaves.”

Anti-slavery crusaders like Messaoud have great difficulty working against this attitude because it is rooted in the Qur’an and Muhammad’s example. The Muslim prophet Muhammad owned slaves, and like the Bible, the Qur’an takes the existence of slavery for granted, even as it enjoins the freeing of slaves under certain circumstances, such as the breaking of an oath: “Allah will not call you to account for what is futile in your oaths, but He will call you to account for your deliberate oaths: for expiation, feed ten indigent persons, on a scale of the average for the food of your families; or clothe them; or give a slave his freedom” (5:89). But while the freeing of a slave or two here and there is encouraged, the institution itself is never questioned. The Qur’an even gives a man permission to have sexual relations with his slave girls as well as with his wives: “The believers must (eventually) win through, those who humble themselves in their prayers; who avoid vain talk; who are active in deeds of charity; who abstain from sex, except with those joined to them in the marriage bond, or (the captives) whom their right hands possess, for (in their case) they are free from blame…” (23:1-6). A Muslim is not to have sexual relations with a woman who is married to someone else – except a slave girl: “And all married women (are forbidden unto you) save those (captives) whom your right hands possess. It is a decree of Allah for you” (4:24).

In the past, as today, most slaves in Islam were non-Muslims who had been captured during jihad warfare. The pioneering scholar of the treatment of non-Muslims in Islamic societies, Bat Ye’or, explains the system that developed out of jihad conquest:

The jihad slave system included contingents of both sexes delivered annually in conformity with the treaties of submission by sovereigns who were tributaries of the caliph. When Amr conquered Tripoli (Libya) in 643, he forced the Jewish and Christian Berbers to give their wives and children as slaves to the Arab army as part of their jizya [tax on non-Muslims].

From 652 until its conquest in 1276, Nubia was forced to send an annual contingent of slaves to Cairo. Treaties concluded with the towns of Transoxiana, Sijistan, Armenia, and Fezzan (Maghreb) under the Umayyads and Abbasids stipulated an annual dispatch of slaves from both sexes. However, the main sources for the supply of slaves remained the regular raids on villages within the dar-al-harb [House of War, i.e., non-Islamic regions] and the military expeditions which swept more deeply into the infidel lands, emptying towns and provinces of their inhabitants.[1]

Historian Speros Vryonis observes that “since the beginning of the Arab razzias [raids] into the land of Rum [the Byzantine Empire], human booty had come to constitute a very important portion of the spoils.” As they steadily conquered more and more of Anatolia, the Turks reduced many of the Greeks and other non-Muslims there to slave status: “They enslaved men, women, and children from all major urban centers and from the countryside where the populations were defenseless.”[2] The Indian historian K. S. Lal states that wherever jihadists conquered a territory, “there developed a system of slavery peculiar to the clime, terrain and populace of the place.” When Muslim armies invaded India, “its people began to be enslaved in droves to be sold in foreign lands or employed in various capacities on menial and not-so-menial jobs within the country.”[3]

Slaves faced pressure to convert to Islam. In an analysis of Islamic political theories, Patricia Crone notes that after a jihad battle was concluded, “male captives might be killed or enslaved…Dispersed in Muslim households, slaves almost always converted, encouraged or pressurized [sic] by their masters, driven by a need to bond with others, or slowly, becoming accustomed to seeing things through Muslim eyes even if they tried to resist.”[4] Thomas Pellow, an Englishman who was enslaved in Morocco for twenty-three years after being captured as a cabin boy on a small English vessel in 1716, was tortured until he accepted Islam. For weeks he was beaten and starved, and finally gave in after his torturer resorted to “burning my flesh off my bones by fire, which the tyrant did, by frequent repetitions, after a most cruel manner.”[5]

Slavery was taken for granted throughout Islamic history, as it was, of course, in the West as well up until relatively recent times. Yet while the European and American slave trade get stern treatment attention from historians (as well as from reparations advocates and guilt-ridden politicians), the Islamic slave trade, which actually lasted longer and brought suffering to a larger number of people, is virtually ignored. (This fact magnifies the irony of Islam being presented to American blacks as the egalitarian alternative to the “white man’s slave religion” of Christianity.) While historians estimate that the transatlantic slave trade, which operated between the sixteenth and nineteenth centuries, involved around 10.5 million people, the Islamic slave trade in the Sahara, the Red Sea and the Indian Ocean areas began in the seventh century and lasted into the nineteenth, and involved 17 million people.[6]

And when pressure came to end slavery, it moved from Christendom into Islam, not the other way around. There was no Muslim William Wilberforce or William Lloyd Garrison. In fact, when the British government in the nineteenth century adopted the view of Wilberforce and the other abolitionists and began to put pressure on pro-slavery regimes, the Sultan of Morocco was incredulous. “The traffic in slaves,” he noted, “is a matter on which all sects and nations have agreed from the time of the sons of Adam...up to this day.” He said that he was “not aware of its being prohibited by the laws of any sect” and that the very idea that anyone would question its morality was absurd: “No one need ask this question, the same being manifest to both high and low and requires no more demonstration than the light of day.”[7]

However, it was not the unanimity of human practice, but the words of the Qur’an and Muhammad that were decisive in stifling abolitionist movements within the Islamic world. Slavery was abolished only as a result of Western pressure; the Arab Muslim slave trade in Africa was ended by the force of British arms in the nineteenth century.

Besides being practiced more or less openly today in Sudan and Mauritania, there is evidence that slavery still continues beneath the surface in some majority-Muslim countries as well -- notably Saudi Arabia, which only abolished slavery in 1962, Yemen and Oman, both of which ended legal slavery in 1970, and Niger, which didn’t abolish slavery until 2004. In Niger, the ban is widely ignored, and as many as one million people remain in bondage. Slaves are bred, often raped, and generally treated like animals.

A shadow cast by the strength and perdurability of Islamic slavery can be seen in instances where Muslims have managed to import this institution to the United States. A Saudi named Homaidan Al-Turki, for instance, was sentenced in September 2006 to 27 years to life in prison, for keeping a woman as a slave in his home in Colorado. For his part, Al-Turki claimed that he was a victim of anti-Muslim bias. He told the judge: “Your honor, I am not here to apologize, for I cannot apologize for things I did not do and for crimes I did not commit. The state has criminalized these basic Muslim behaviors. Attacking traditional Muslim behaviors was the focal point of the prosecution.” The following month, an Egyptian couple living in Southern California received a fine and prison terms, to be followed by deportation, after pleading guilty to holding a ten-year-old girl as a slave. And in January 2007, an attaché of the Kuwaiti embassy in Washington, Waleed Al Saleh, and his wife were charged with keeping three Christian domestic workers from India in slave-like conditions in al-Saleh’s Virginia home. One of the women remarked: “I believed that I had no choice but to continue working for them even though they beat me and treated me worse than a slave.”

All this indicates that the problem of Islamic slavery is not restricted to recent events in the Sudan; it is much larger and more deeply rooted. The United Nations and human rights organizations have noted the phenomenon, but nevertheless little has been done to move decisively against those who still hold human beings in bondage, or aid or tolerate others doing so. The UN has tried to place peacekeeping forces in Darfur, over the objections of the Sudanese government, but its remonstrations against slavery in Sudan and elsewhere have likewise not resulted in significant government action against the practice. Amnesty International and Human Rights Watch have also noted the problem, but as HRW observes, “the government of Sudan has stonewalled on the issue of slavery, claiming it was a matter of rival tribes engaging in hostage taking, over which it had little control. That is simply untrue, as myriad reports coming out of southern Sudan have made abundantly clear.” For Islamic slavery to disappear, a powerful state would have to move against it decisively, not with mere words, and accept no equivocation of half-measures. In today’s international geopolitical climate, nothing could be less likely.

Robert Spencer is a scholar of Islamic history, theology, and law and the director of Jihad Watch. He is the author of six books, seven monographs, and hundreds of articles about jihad and Islamic terrorism, including Islam Unveiled: Disturbing Questions About the World’s Fastest Growing Faith and the New York Times Bestsellers The Politically Incorrect Guide to Islam (and the Crusades) and The Truth About Muhammad.

Email ThisBlogThis!Share to TwitterShare to FacebookShare to Pinterest
Labels: Africa, Islam and The West, Robert Spencer