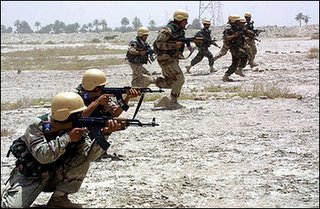 All eyes now turn to Baghdad and Sadr City.

This was not Churchill, not FDR, and not JFK Wednesday night, and there was not quite enough about winning and victory — but the content was still good enough.

Many of us were skeptical of a surge/bump/increase for an obvious reason: Our military problems in Iraq have been tactical and strategic (too-slow training too few Iraqis, arrest/release of terrorists, too many targets off limits, patrolling in lieu of attacking, worry over our own force protection rather than securing the safety of Iraqi citizens, open borders with Syria and Iran, etc.) — and not a shortage of manpower.

So the increase — no one knows whether the 20,000 number is adequate — could make things far worse by offering more targets and creating more Iraqi dependency if we don’t change our operations. But if the surge ups the ante by bringing a radical new approach on the battlefield as the president promises, then it is worth his gamble.

All the requisite points were made by the president, almost as if were quoting verbatim Gen. David Petraeus’s insightful summaries of counterinsurgency warfare — an Iraqi face on operations, economic stimuli, clear mission of clearing terrorists out of Baghdad, political reform, a “green-light” to go after killers — while addressing the necessary regional concerns with Syria and Iran.

Will these “benchmarks” work? Only if the Maliki government is honest when he promises that there will be no sanctuaries for the militias and terrorists. So when the killing of terrorists causes hysteria — and it will, both in Iraq and back here at home — the Iraqi-American units must escalate their operations rather than stand down.

The American people will support success and an effort to win, whatever the risks, but not stasis. We saw that with the silent approval of Ethiopia’s brutal rout of the Islamists in Somalia, and our own attack on al Qaeda there.

The subtext of the president’s speech was that our sacrifices to offer freedom and constitutional government are the only solution for the Middle East — but that our commitments are not open-ended if the Iraqis themselves don’t want success as much as we do.

But why believe that this latest gamble will work? One, things are by agreement coming to a head: this new strategy will work, or, given the current politics, nothing will. Two, the Iraqis in government know this time Sadr City and Baghdad are to be secured, or it is to be “see ya, wouldn’t want to be ya,” and they will be on planes to Dearborn.

Finally note the pathetic Democratic reply by Sen. Durbin, last in the public eye for his libel of American troops (as analogous to “Nazis, Soviets in their gulags, or some mad regime — Pol Pot or others”). There was no response.

Durbin simply assumed credit for the Bush policy of deposing Saddam, fostering democracy, and then blamed the Iraqis and said enough was enough. Not a word followed about the effects of a rapid withdrawal. In other words, the Democratic policy is that anything good in Iraq they supported, anything bad they opposed. And they will now harp yet do nothing — except whine in fear the surge might actually work.

So where does that leave us? All eyes now turn to Baghdad and Sadr City and our courageous Americans fighting in them. If they are allowed to rout the terrorists, all will trumpet their victory; if we fail, President Bush alone will take the blame.

In other words, as in all wars, the pulse of the battlefield will determine the ensuing politics. So let’s win in pursuit of victory, and everything else will sort itself out.

— Victor Davis Hanson is a military historian and a senior fellow at the Hoover Institution at Stanford University. His website is victorhanson.com.
Posted by jtf at 10:00 AM