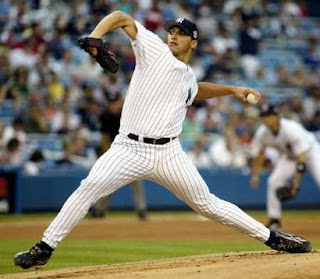 A Familiar Face Returns, Bringing Hope That Another Follows

The marquee atop Yankee Stadium yesterday told motorists there were 33 days until pitchers and catchers report for spring training. Reversing the calendar would show it has been 34 days since the Yankees agreed to contract terms with Andy Pettitte.


A little late, but as earnest as ever, Pettitte had his Stadium Club news conference yesterday, slipping into his old No. 46 uniform and tugging on his familiar navy cap. Soon enough, he will be yanking it down near his eyebrows again, staring in for the sign from catcher Jorge Posada as if he had never left.

“It’s really strange,” said Pettitte, who signed a one-year, $16 million contract that includes a player option. “Just the little bit that I’ve been able to walk around, everything looks the same. Down in the clubhouse, it’s just like, ‘Wow.’ ”

Pettitte will be 35 in June, and he is graying a bit above the ears. His elbow has been operated on since he signed with his hometown Houston Astros after the 2003 World Series, and he has logged 87 starts, including the postseason.

Yet he has remained an elite pitcher, and the Yankees hope his powers of persuasion are intact. It was Pettitte’s surprise signing with the Astros that prompted Roger Clemens to call off his retirement and join the Astros in 2004.

Will Clemens follow Pettitte back to New York? Pettitte fielded many questions yesterday, but that was the most pressing.

“As a friend of his, it wouldn’t be fair to share anything that he’s shared with me on that subject,” Pettitte said. “All I feel comfortable saying, and that’s not even definite, but after speaking with him, he probably wants to try to pitch. It’s amazing that he still wants to pitch, but he does, like he’s 20. He’s got an unbelievable amount of energy.

“You add Roger Clemens to your staff, as far as I’m concerned, he’s the greatest pitcher to ever play the game, that’s great. Does he know that I would love that? Of course. And when you add him, your expectations are even higher.”

Clemens, 44, is a free agent, and his agent, Randy Hendricks, has advised him to pitch a partial season, as he did last year. Pettitte laughed at the suggestion that Clemens would be reporting with him to Tampa, Fla., next month. “I would think spring training would be definitely out,” he said.

The Astros, the Boston Red Sox and the Yankees all interest Clemens, and all would welcome him back.

“All of them have such compelling points to them,” Pettitte said. “Boston is where it all started for him, New York is where we won the championships, and home is home. He’s there, the schedule they would have with his family situation, he’s got a son in the organization. Those are the things that have to be going through his mind.”

The Red Sox and the Yankees would bid aggressively for Clemens, with the Yankees privately determined not to be outbid, especially after paring payroll with their trade of Randy Johnson to Arizona.

The Astros, who paid Clemens a prorated $22 million last year, have allowed Clemens to miss road trips to be with his family. Yankees Manager Joe Torre has said the Yankees would not allow a player to do that.

Asked if Clemens would require his 2007 team to offer the same benefits as the Astros, Hendricks said in an e-mail message: “That is not a question we need to address now. Roger has to decide whether to play. Once that decision is made, I go from there.”

Cashman would not detail a potential Yankees offer. But he admitted the Yankees wanted Clemens.

“It’s not that I haven’t talked to Randy Hendricks about Roger Clemens; I haven’t spoken to Roger at all,” Cashman said. “But they know we have an interest. They knew we had an interest last year.”

Trading for Clemens after the Yankees’ 1998 World Series title was among Cashman’s finest moves. It jolted a team that had dominated the previous season, and Clemens wound up pitching in four World Series for the Yankees. But Cashman said he knows Clemens well enough to let him determine his future. Clemens knows the Yankees will be ready for him.

“If we would be included as a team that he would be at least interested in hearing what we have to say, then, yeah, it would be a full-court press,” Cashman said. “But I can tell you right now: Roger is a man that makes his own decisions. I can do every trick in the book, but if he’s not ready to make a decision, it would be more wasted energy.”

For now, Cashman is looking forward to a Caribbean vacation that starts this weekend. After house hunting in Westchester, Pettitte was heading back to Texas. Before he left, though, he had a conversation with the Yankees’ principal owner, George Steinbrenner.

“I’m happy you’re back,” Steinbrenner told Pettitte, according to Steinbrenner’s publicist, Howard Rubenstein. “Go and do a good job for us, and I’m counting on you.”

And how would Steinbrenner feel about signing Clemens, too? Rubenstein had no comment.
Posted by jtf at 10:11 AM