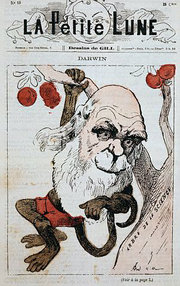 Modern atheists have no new arguments, and they lack their forebears' charm.

When the very first population of atheists roamed the earth in the Victorian age--brought to life by Lyell's "Principles of Geology," Darwin's "Origin of Species" and other blows to religious certainty--it was the personal dimension of atheism that others found distressing. How could an atheist's oath of allegiance to the queen be trusted? It couldn't--so an atheist was not allowed to take a seat in Parliament. How could an atheist, unconstrained by a fear of eternal punishment, be held accountable to social norms of behavior? Worse than heretical, atheism was not respectable.

In the 21st century, this no longer seems to be the case. Few acquaintances of Dr. Richard Dawkins, the world's most voluble public atheist, wonder, as they might have a hundred years ago: Can I leave my wife unchaperoned in this man's company? Indeed, the atheists are now looking to turn the tables: They want to make belief itself not simply an object of intellectual derision but a cause for personal embarrassment. A new generation of publicists for atheism has emerged to tell Americans in particular that we should be ashamed to retain a majority of religious believers, that in this way we resemble the benighted, primitive peoples of the Middle East, Africa and South America instead of the enlightened citizens of Western Europe.

Thanks in part to the actions of a few jihadists in September 2001, it is believers who stand accused, not freethinkers. Among the prominent atheists who now sermonize to the believers in their midst are Dr. Dawkins, Daniel C. Dennett ("Breaking the Spell") and Sam Harris ("The End of Faith" and, more recently, "Letter to a Christian Nation"). There are others, too, like Steven Weinberg, the Nobel Prize-winning physicist, Brooke Allen (whose "Moral Minority" was a celebration of the skeptical Founders) and a host of commentators appalled by the Intelligent Design movement. The transcript of a recent symposium on the perils of religious thought can be found at a science Web site called edge.org.

There are many themes to the atheist lament. A common worry is the political and social effect of religious belief. To a lot of atheists, the fate of civilization and of mankind depends on their ability to cool--or better, simply to ban--the fevered fancies of the God-intoxicated among us.

Naturally, the atheists focus their peevishness not on Muslim extremists (who advertise their hatred and violent intentions) but on the old-time Christian religion. ("Wisdom dwells with prudence," the Good Book teaches.) They can always haul out the abortion-clinic bomber if they need a boogeyman; and they can always argue as if all faiths are interchangeable: Persuade American Christians to give up their infantile attachment to God and maybe Muslims will too. In any case, they conclude: God is not necessary, God is impossible and God is not permissible if our society--or even our species--is to survive.

What is new about the new atheists? It's not their arguments. Spend as much time as you like with a pile of the recent anti-religion books, but you won't encounter a single point you didn't hear in your freshman dormitory. It's their tone that is novel. Belief, in their eyes, is not just misguided but contemptible, the product of provincial minds, the mark of people who need to be told how to think and how to vote--both of which, the new atheists assure us, they do in lockstep with the pope and Jerry Falwell.

For them, belief in God is beyond childish, it is unsuitable for children. Today's atheists are particularly disgusted by the religious training of young people--which Dr. Dawkins calls "a form of child abuse." He even floats the idea that the state should intervene to protect children from their parents' religious beliefs.

For the new atheists, believing in God is a form of stupidity, which sets off their own intelligence. They write as if they were the first to discover that biblical miracles are improbable, that Parson Weems was a fabulist, that religion is full of superstition. They write as if great minds had never before wrestled with the big questions of creation, moral law and the contending versions of revealed truth. They argue as if these questions are easily answered by their own blunt materialism. Most of all, they assume that no intelligent, reflective person could ever defend religion rather than dismiss it. The reviewer of Dr. Dawkins's volume in a recent New York Review of Books noted his unwillingness to take theology seriously, a starting point for any considered debate over religion.

The faith that the new atheists describe is a simple-minded parody. It is impossible to see within it what might have preoccupied great artists and thinkers like Homer, Milton, Michelangelo, Newton and Spinoza--let alone Aquinas, Dr. Johnson, Kierkegaard, Goya, Cardinal Newman, Reinhold Niebuhr or, for that matter, Albert Einstein. But to pass over this deeper faith--the kind that engaged the great minds of Western history--is to diminish the loss of faith too. The new atheists are separated from the old by their shallowness.

To read the accounts of the first generation of atheists is profoundly moving. Matthew Arnold wrote of the "eternal note of sadness" sounded when the "Sea of Faith" receded from human life. In one testament after another--George Eliot, Carlyle, Hardy, Darwin himself--the Victorians described the sense of grief they felt when religion goes--and the keen, often pathetic attempts to replace it by love, by art, by good works, by risk-seeking and--fatally--by politics.

God did not exist, they concluded, but there was no denying that this supposed truth was accompanied by a painful sense of being cut off from human fellowship as well as divine love. To counter it, religious figures developed a new kind of mission--like that of the former unbeliever C.S. Lewis: They could speak to the feeling of longing that unbelief engenders because they understood it--and sympathized not only with atheism's pain but with the many sensible arguments in its favor.

There is no such sympathy among the new apostles of atheism--to find it, one has to look to believers. Anyone who has actually taught young people and listened to them knows that it is often the students who come from a trained sectarian background--Catholic, Orthodox Jewish, Muslim, Mormon--who are best at grasping different systems of belief and unbelief. Such students know, at least, what it feels like to have such a system, and can understand those who have very different ones. The new atheists remind me of other students from more "open-minded" homes--rigid, indifferent, puzzled by thought and incapable of sympathy.

The new atheists fail too often simply for want of charm or skill. Twenty-first century atheism hasn't found its H.G. Wells or its George Bernard Shaw, men who flattered their audiences, excited them and persuaded them by making them feel intelligent. Here is Sam Harris, for instance, addressing those who wonder if destroying human embryos in the process of stem cell research might be morally dicey: "Your qualms . . . are obscene."

The atheists say that they are addressing believers. Rationalists all, can they believe that believers would be swayed by such contumely and condescension? They seem instead to be preaching to people exactly like themselves--a remarkably incurious elite.

Mr. Schulman is publishing director of the American, a magazine of ideas for business leaders.
Posted by jtf at 12:40 AM