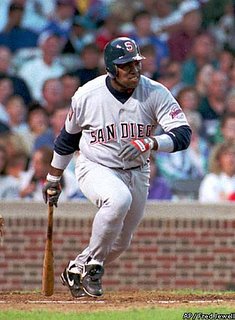 Tony Gwynn acknowledges fans yesterday at a news conference at Petco Park. Said Gwynn: "I'm proud as heck. All the years I played, I had this day in mind." The element of suspense was conspicuously absent in Gwynn's candidacy for the baseball shrine in Cooperstown. His was a rubber stamp that read, “Well, Duh.” His 97.6 percent approval rating was the seventh-highest all-time and, as such, better than that of Babe Ruth or Willie Mays or Gwynn's pro bono hitting coach, Theodore Samuel Williams.

The question, at least in Gwynn's mind, was whether singles hitters like himself were accorded a lesser form of immortality; whether the sluggers

sneered at the table-setters in some sort of informal Hall of Fame hitters hierarchy.
Obviously, Mr. Padre was overthinking the whole thing. The Padres would not have commissioned a statue of Gwynn (to be unveiled this summer) if he were some second-rate star.
This is a guy, remember, with more batting titles than any man breathing. Yet the idle ballplayer's brain is susceptible to all kinds of claptrap during the five years between retirement and a first appearance on the Baseball Writers' Association of America's ballot.

Gwynn once asked Rod Carew if polling 90 percent of the vote had affected his enjoyment of the induction experience. Carew assured him that simply getting elected was elation enough.

“I saw (the late) Kirby Puckett at this batting champions show a couple of years ago,” Gwynn recalled. “He said, 'Tony, I can't wait until you get in because we have a seat at the singles hitters table with Rod Carew and Paul Molitor and Wade Boggs.' It kind of reassured me. I (didn't) really know where I fit.”

If singles hitters tend to congregate at Cooperstown functions, they are widely dispersed within the Hall of Fame gallery itself. There, the plaques are arranged chronologically, according to the year of a player's induction, and every sawed-off slap hitter since Wee Willie Keeler is accorded the same amount of wall space as Hank Aaron.

Once a ballplayer has been initiated into this exclusive fraternity, there is no formal demarcation between the giants elected on the BBWAA's first ballot and the Veterans Committee's less-qualified cronies. If there is a secret handshake among Hall of Fame singles hitters, Gwynn had yet to learn it as of yesterday afternoon.

He appeared on a platform beyond the outfield walls of Petco Park, “sweating like a slave” (ouch) before a crowd of associates, admirers and his own San Diego State baseball team.
Dressed in a business suit and a ballcap, Gwynn expressed relief that his landslide had not eclipsed Tom Seaver's record of 98.8 percent, and pride that his career had received this ultimate “validation” – and not just for himself, but for contemporary contact hitters such as Juan Pierre and Ichiro Suzuki.

“It's an unbelievable feeling to know that people think that what you did was worthy,” Gwynn said. “... The type of player that I was doesn't get a whole lot of credit in today's game. For a hitter like me, I had to do a lot of what I did (to earn induction).”

With 3,141 career hits and eight National League batting titles, Gwynn's credentials were so strong that many voters were able to check his name without bothering to study the statistics. Yet beyond the sum totals on Gwynn's stat sheet, his career (like that of fellow inductee Cal Ripken Jr.) is a credit to constancy.

In 10 separate seasons, Gwynn was the hardest hitter to strike out in the National League. Though Padres owner John Moores was incorrect when he told the crowd Gwynn had fewer strikeouts than any man with 3,000 hits (even discounting the dead-ball era, there's the matter of Paul Waner), Moores' central point was salient: There is a lot to be said for simply being able to put the ball in play.

Were each of Gwynn's 2,378 singles worth only the 90 feet between home plate and first base, their cumulative length would stretch more than 40 miles. Maybe Gwynn wasn't the most formidable figure to occupy the batter's box. Maybe his relatively modest run production accounts for some of the 13 votes he failed to get.

But if you needed a two-out single to win a ballgame, what batter would you prefer to No. 19?
When Gwynn won his second batting title in 1987, he finished second in the National League with 26 intentional walks. Considering that he swatted only seven home runs that season, this statistic bespeaks respect bordering on reverence.

“I was a good player,” Gwynn said yesterday, “but I knew my place. I was not a game-changer. I was not a dominant player.”

He was, however, the Sultan of Singles. He is, henceforth, every inch an immortal.