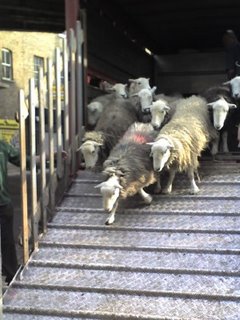 As part of this column's ongoing commitment to in-depth coverage of the issues that matter, we're pleased to present the first of a new series: Sheep In the News. Here are two headlines from the last week.

From the Wall Street Journal: "Ritual sacrifice? Not on my street, some Belgians say."

And from the Sunday Times of London: "Science told: Hands off gay sheep."

The first story is about the 25,000 sheep in Brussels that a few days ago found themselves pointed toward Mecca and then slit through the throat and bled to death. Muslims do this to celebrate Eid al-Adha, which commemorates Abraham's willingness to sacrifice his son to God and God's willingness to settle for a ram in lieu. The Belgian Muslim population has grown so fast that there aren't enough places in the city to perform the ritual sacrifice, and come Eid it's like sheep drivetime at every Brussels slaughterhouse, with rams backed up ram-to-ram as far as the eye can see. As reported by the Journal, Mohamed Mimoun grabbed his sheep, took a number and realized he was in for a two-hour wait. Even worse, en route to the slaughterhouse, he was stopped by a cop and fined for having the sheep in the trunk of his Toyota. By law, the sheep is supposed to ride in the rear passenger seats. Baa, baa, back seat.

On which note, let us turn to the gay sheep. Apparently, researchers at Oregon Health and Science University and Oregon State University have been experimenting with ovine hormonal balances in order to persuade homosexual rams of the error of their ways. It seems they've had "considerable success" with injecting hormones into the rams' brains. Suddenly the lads are playing the field and crooning a couple of choruses of "Embrace me, my sweet embraceable ewe."

Gay groups (human gay groups, that is: Even America does not yet have a 24/7 gay sheep lobby group with offices on K Street) are not happy about this. Martina Navratilova, the nine-time Wimbledon champ, has called for the project to be abandoned and for scientists to respect, as the Sunday Times put it, "the right of sheep to be gay." Many of us can sympathize. The poor old sheep gets it coming and going. If he's going to end up bleeding to death while turned toward Mecca, he ought at least be able to choose his orientation in the runup to it. Might as well be hung for a ram as for a ewe. Surely a sheep should be able to celebrate his own sexuality without a lot of crazed ovine eugenicists strapping him to a gurney and shooting him the hetero-juice. As they sing in the first act finale of ''La Cage Aux Folles'':

Life's not worth a damn

Till you can say, hey, world

I ram what I ram.

Meanwhile, Udo Schuklenk, professor of Bioethics at Glasgow Caledonian University, has warned that this research "brings the terrible possibility of exploitation by homophobic societies. Imagine this technology in the hands of Iran, for example. It is typical of the U.S. to ignore the global context in which this is taking place."

Nobody in Scotland seems to be spending much time imagining, say, nuclear technology in the hands of Iran, but in Glasgow they're up in arms about the mullahs getting sheep-straightening technology. If President Bush is looking for a casus belli against Tehran, the gay-ram angle may be the best shot at bringing the EU on board. "E U," by the way, is the abbreviation for "European Union" and not what a gay ram says in distaste when the lady sheep come strolling by en route to the dip.

Unlike Martina Navratilova, I'm no expert in sheep sexuality. Who put the ram in the ram-a-lama-ding-dong? I couldn't tell you. But I'm always interested in the internal contradictions of the rainbow coalition. If you're a farmer, a ram is an economic asset. So, if he's gay, he's useless. Back in the '80s, Jasper Conran, couturier to the princess of Wales, was said to have glanced out of his train window at some grazing Holsteins and sighed, "Black and white is so last season," an observation which (if somewhat apocryphal) helpfully distills the limitations of the gay sensibility applied to the farmyard. So, on hearing that experts have come up with a nicotine-patch-like sticker that a pregnant sheep can wear to straighten out any potential gayness in her fetus, your average farmer might well think it worth investing in.

And, if that happens, at what point will a woman's right to choose intersect with a farmer's right to ewes? Under Beijing's one-child policy, Chinese women exercised their "right to choose" the sex of their baby so radically that they now have the most gender-lopsided demographic cohort in history: millions of surplus boys for whom all the girl babies were aborted. Professor Schuklenk is right: "Homophobic societies" may well choose to de-gay their offspring. After all, much abortion practice is already explicitly eugenicist: If a woman can decide she doesn't want to carry a baby with Down syndrome or a cleft palate or because she only wanted one of the triplets, why should she be obliged to accept his orientation? Once you've redefined pregnancy in the radically individualist terms that abortion absolutists have, why should the modish pieties of political correctness prove any more effective a restraint than conventional social and religious morality? In 2005, responding to a highly hypothetical possibility of parental screening for a "gay gene," a Maine state representative introduced a bill for the protection of unborn gays. But it's hard to see why, in liberal abortion theology, unborn gays should be any worthier of protection than unborn straights.

Which brings us back to the streets of Brussels. Ann De Greef, a Belgian animal-rights activist, does not enjoy the annual Eid massacre. "It's not normal to have thousands of sheep slaughtered like this in the middle of a major European city," she complained.

Au contraire, it is. And, given Islam's demographic advantage, it's going to get ever more normal. Muslims pay Belgian farmers about 250 bucks to acquire a sheep for the ritual sacrifice, which suggests they're pretty serious about it. Indeed, given Islam's political muscle, it's more likely that the remaining restrictions on ritual sacrifice will be rescinded. Tired of standing in line at crowded slaughterhouses, many Brussels Muslims sacrifice the sheep at home -- which is illegal under Belgian law but which the state already turns a blind eye to.

The left carelessly assumes that the various factions in their identity-group coalition are allies in perpetuity who can be rounded up like sheep and pointed in the same direction. They're not.
The Belgian sheep story is about demographic advance, the Oregon sheep story is about technological advance. But the most potent combination is technology yoked to demography: In other words, how much demand will there be for the latest innovation? Abortion for genetic abnormalities? Quite a lot in America. Abortion to decrease unwanted daughters? An awful lot in China and India.

And a patch to de-gay your baby?

We're poor little lambs who have lost our way. Baa-baa-baa.

Email ThisBlogThis!Share to TwitterShare to FacebookShare to Pinterest
Labels: Islam and The West, Mark Steyn, Marriage and Family