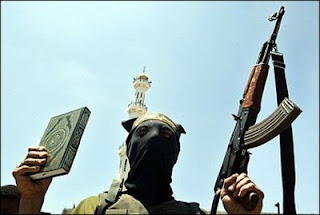 Representative Keith Ellison (D-MN) has been named to the House Judiciary Committee. Ellison said in a statement: “I look forward to pursuing a progressive agenda in the committee, including the restoration of American citizen’s civil liberties that have come under increasing attack over the past six years.”

The American citizens Ellison, the nation’s first Muslim congressman, has in mind are likely Muslims who charge that they have been subjected to unjust scrutiny and inconvenience in the aftermath of 9/11. House Speaker Nancy Pelosi (D-CA) shares this view: she has announced her intention to “correct the Patriot Act,” and wants to criminalize scrutiny of Muslims at airports and elsewhere: “Since September 11, many Muslim Americans have been subjected to searches at airports and other locations based upon their religion and national origin. We must make it illegal.” Helping make it illegal with Ellison on the House Judiciary Committee will be John Conyers (D-MI), the new chairman of that committee. “The policies of the Bush administration,” he has declared, “have sent a wave of fear through our immigrant communities and targeted our Arab and Muslim neighbors.”

Pelosi, Conyers, and Ellison by all appearances seem less concerned about any wave of fear that may be sent through American non-Muslims by continued jihad terror activity on American soil. But just this week there have been numerous indications that that jihad activity is continuing:

[1] Talib Abu Salam ibn Shareef (Derrick Shareef), a convert to Islam, pled not guilty Tuesday to plotting a terrorist attack against a shopping mall in Rockford, Illinois. As they were discussing his plans before his arrest, Shareef told an undercover agent: “Any place that’s crowded, like a mall is good, anything, any government facility is good. I swear by Allah man, I’m down for it too, I’m down for the cause, I’m down to live for the cause and die for the cause, man.” What cause? In a videotaped statement discovered after his arrest, Shareef tied his plans explicitly to his Islamic faith: “I am from America, and this tape is to let you guys know, who disbelieve in Allah, to let the enemies of Islam know, and to let the Muslims alike know that the time for jihad is now...be strong, oh Mujahideen...May Allah protect me on this mission we conduct...so do not cry, do not mourn for me.”

[2] Mohammed Yousuf Mullawala, a Muslim citizen of India, is the subject of a continuing investigation in Rhode Island after enrolling in a truck driving school, inquiring about getting a permit to carry hazardous materials, and telling instructors that he did not need to learn how to back up. Also, Rhode Island State Police Major Steven O’Donnell revealed that “we’ve tied some of his cell-phone records to people of interest nationally” – that is, people who are suspected of terrorist activity. “They’re not your typical person’s cell-phone history … the volume of contacts obviously raises the level of suspicion.” Referring to Mullawala’s own possible connection to jihad terror activity, O’Donnell said: “We don’t know whether he’s a major player, a minor player, or any type of player. But the indicators lead us to believe that his behavior is not normal.”

[3] Imam Fawaz Damra, the former leader of the largest mosque in Cleveland, was deported to the West Bank last Thursday. When he arrived, Israeli authorities promptly arrested him for his ties to the terrorist group Palestinian Islamic Jihad. His failure to disclose those ties got him deported in the first place. He was also captured on videotape telling an Islamic audience that “the first principle is that terrorism, and terrorism alone, is the path to liberation…. If what they mean by jihad is terrorism, then we are terrorists” – despite having been a signer of the Fiqh Council of North America’s much lionized condemnation of terrorism.

[4] On Monday, a Pakistani Muslim, Shahawar Matin Siraj, was sentenced to thirty years in prison for his plan to blow up a Manhattan subway station.

[5] Last Friday in Palm Springs, a man named Haider Mohammad, who claimed to be an Al-Qaeda operative, was arrested in a bar after threatening to “kill all Jews.”

And that’s just in the last couple of weeks. In light of these and other cases, are law enforcement officials not justified in directing particular scrutiny at Muslims? After all, neither the American Muslim community nor any other has pronounced takfir on Osama bin Laden or any other jihadist individual or group. (Takfir is an Islamic practice akin to excommunication, involving the declaration that a particular Muslim is actually an unbeliever.) Jihadists move more or less freely among peaceful Muslims worldwide, and those peaceful Muslims have mounted no large-scale, organized attempt to wrest the intellectual and theological initiative away from the jihadists. In light of this, and of the jihadists’ copious and consistent use of Islamic teaching to justify their actions and make new recruits, it would be foolish in the extreme to outlaw, as Pelosi, Conyers, and Ellison wish to do, what is known as “religious profiling.”

Would we really all be safer if the one and only element that is common to all jihad attackers – a devout attachment to Islam – were ruled out of bounds as an object of consideration by law enforcement officials? The anti-profiling initiative that is sure to begin soon will necessarily be predicated on the proposition that there is no more reason to be concerned about devout Muslims than about devout Presbyterians or devout Amish.

Unfortunately, the evidence leads in exactly the opposite direction.