For the past few months, the Norman Rockwell Museum in Stockbridge, Mass., has been traveling the Four Freedoms paintings by Norman Rockwell (1894–1978), which the museum owns. Rockwell finished them in 1943. They were quickly published in The Saturday Evening Post and became famous. The show, Enduring Ideals: Rockwell, Roosevelt, and the Four Freedoms, opens this week at the Museum of Fine Arts in Caen in Normandy as part of the 75th anniversary of the D-Day invasion on June 6. Also 75 years ago, in wartime America, these paintings travelled to department stores throughout the country as the calling card for the federal government’s most lucrative war-bond drive ever. It raised $133 million, equal to about $2 billion today.
I’ll write this week and next about these four pictures. They’re the visual mission statement for America’s role in World War II. They’re also part of the visual vocabulary for most Americans thinking about what it means to be an American.
My perspective is possibly unique, since as far as I know, I’m the only art historian in tiny Arlington in southwestern Vermont, where Rockwell lived when he made these images. I know for certain that I’m the only art historian from Arlington who both writes for National Review and knew many of the models Rockwell used. These pictures, as I’ll show, are very much products of the real Vermont as Rockwell experienced it when he lived here between 1937 and 1953.
Rockwell visualized four subjects — freedom of speech, freedom of worship, freedom from want, and freedom from fear — inspired by a 1941 speech President Franklin Roosevelt delivered before a joint session of Congress. Less than a year before the Pearl Harbor attack and as the European war raged, Roosevelt pitched what soon became the heart of America’s wartime mission statement.
First, who saw these pictures? The better question is “who didn’t?” or, today, “who hasn’t?” They’re icons, and it’s worth asking, “icons of what?” The four paintings were done exclusively for publication in The Post, which commissioned the project by Rockwell, who worked as the magazine’s top illustrator. They appeared in the publication, America’s preeminent news and lifestyle periodical, over four weeks in 1943. The Post then had a circulation of about 3 million. Millions bought a special reprint of the series. The Office of War Information (OWI) distributed about 8 million posters advertising the government’s 1943 Series E war bonds. Since the end of the war, countless millions have seen the images, with Freedom of Speech for many years the symbol for the American Civil Liberties Union, before it abandoned its mission of championing unfettered free speech for defending only speech it likes.
What inspired the paintings at that moment? Roosevelt’s Four Freedoms started as fears, or a single “fear of fear itself,” articulated first in his 1933 inaugural speech. Preparing for his 1941 State of the Union speech, Roosevelt first thought he’d develop the theme of fear further by evoking fear of losing free expression and free worship. He added fear of war and fear of a war-torn, collapsed economy.
It was, he thought, an awkward leap. He landed on the theme of freedom, not fear, as the driver of a new international order. He thought it was more positive and aspirational. Five freedoms — freedom to access information, freedom of expression, worship, and the press, and freedom from want — were whittled to four and then refined. When he addressed Congress on January 6, 1941, the four freedoms were freedom of speech and of worship and freedom from want and from fear.
The speech, centered around the new Lend Lease program, was a dud. If it inspired anything, it was anxiety. Was freedom from want and from fear code for socialism? Many thought these two freedoms invited more government intervention and guarantees, and by 1941 big chunks of the public saw the New Deal itself as a dud. Roosevelt kept pushing the Four Freedoms marketing theme without much traction, even after the Pearl Harbor attack. His Office of War Information was often inept. The number of freedoms grew larger and more trivial, including at one point freedom to borrow money at low interest rates. It wasn’t until Rockwell visualized them that the Four Freedoms finally took off. After Rockwell’s conception appeared in The Post, OWI quickly appropriated them and used them with abandon. 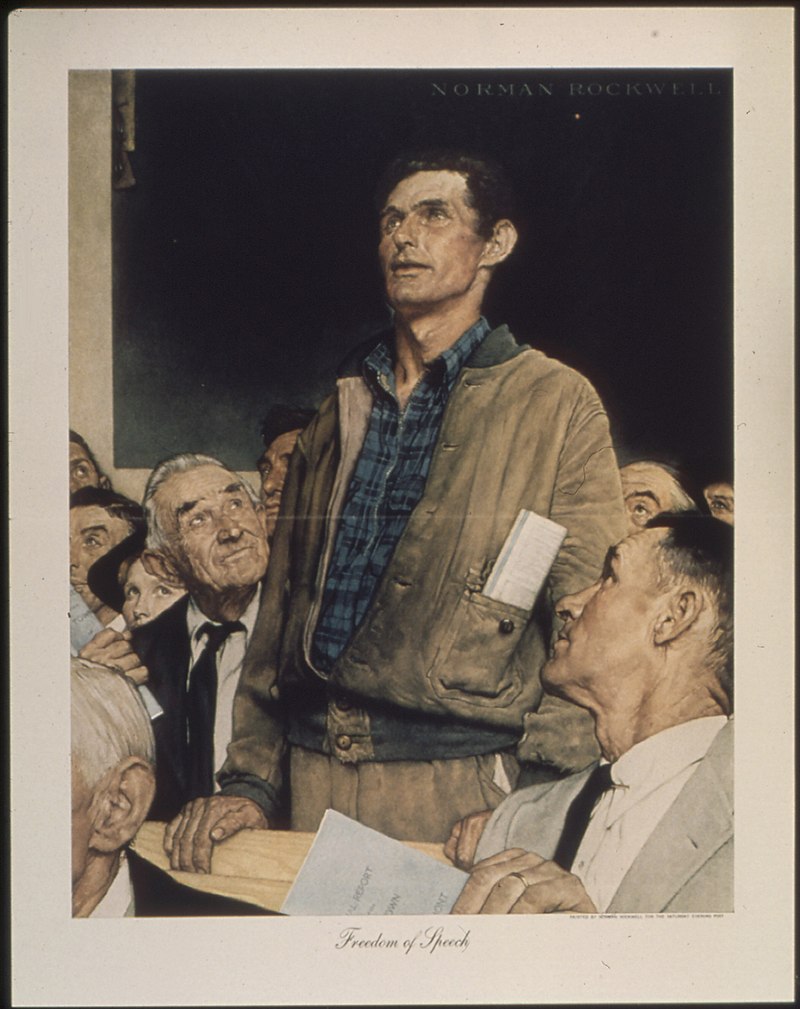