The Scruton tapes: an anatomy of a modern hit job 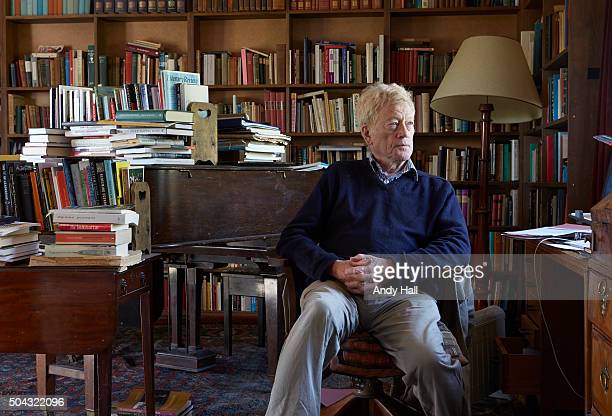 Sometimes a scandal is not just a scandal, but a biopsy of a society. So it is with the assault on Sir Roger Scruton, who in recent weeks has been smeared in the media, fired by the government and had his life’s work assailed. Scruton is the latest, though far from the first victim of the modern outrage mob.
It is now four years since the Nobel prize-winning scientist Tim Hunt was fired by University College London (among other institutions who were lucky to have him). That happened after one member of the audience at a conference in Korea tweeted something he had said about working with women and professed outrage at the comment’s alleged sexism. None of the institutions which dropped Hunt asked if there was any case for the defence. They all just behaved as almost everyone in authority now does: they saw a potential fight and ran. And though they left their man behind — as is also the new way — they also relied on the assumption that the world would soon forget and everyone (except the trampled victim) would move on.
In January, we saw the Covington Boys scandal in America, when a group of schoolboys became the subject of a two-minute hate for allegedly surrounding and taunting a native American tribal elder. By the time the facts came out (there had been no taunting, the boys had done nothing wrong) they had been denounced as racists in front of millions. But if winning a Nobel prize in science is no mitigation in being falsely accused, what chance do schoolboys or the rest of us have? Anyone, it seems, can claim a scalp using Twitter: twist the words of your victim and let the outrage mob do the rest.
The hit job on Sir Roger can be seen as a classic of the genre: he was sacked within five hours of the Twitter storm breaking. His fate offers a perfect case study in the art of modern character assassination. Except that in this instance, it unravelled and the whole nature of the trick can now be exposed. It is worth examining in some detail.
Last month, Scruton agreed to be interviewed in his London flat by George Eaton, one of the deputy editors of the New Statesman. In November the philosopher had been appointed to be the unpaid chair of a government quango called ‘Building better, building beautiful’, but Scruton was led to believe that the discussion would be about his books, a number of which had recently been reissued.


The lunchtime before the resulting interview’s publication, Eaton declared on Twitter that ‘the government adviser and philosopher Roger Scruton has made a series of outrageous remarks’, and included a link to the interview. The supposed offences were listed with salivation. Scruton was alleged to have talked outrageously about ‘Hungarian Jews’. He was alleged to have been racist about ‘the Chinese’. He was alleged to have described ‘Islamophobia’ as ‘a propaganda word invented by the Muslim Brotherhood in order to stop discussion of a major issue’. He had described accusations of anti-Semitism against Viktor Orban as ‘nonsense’ and talked of Muslim ‘tribes’. Outrage and resignation calls soon followed. The perfect Twitter storm had been started.
In response, the Conservative MP Tom Tugendhat issued a condemnation of racism — which, as he must have known would happen, was reported as a call for Scruton’s firing. His fellow Conservative MP (and fellow former soldier) Johnny Mercer declared that sacking Scruton was now a ‘no brainer’ — adding, slightly too revealingly: ‘Let’s not take our time on this.’ Thus did two Conservative leadership wannabes thoughtlessly throw one of Britain’s only conservative thinkers before the mob. George Osborne of the Evening Standard joined in condemning Scruton for his ‘bigoted remarks’ and calling for his sacking. Lord Finkelstein of the Timesagreed. By teatime James Brokenshire, the minister who had appointed Scruton last autumn, had announced that he had been fired.
This was treated with jubilation — especially by Eaton, who posted on Instagram (and subsequently deleted) a photo of himself online necking a bottle of champagne. His caption: ‘The feeling when you get right-wing racist and homophobe Roger Scruton sacked as a Tory government adviser.’
The rest of the media piled in: ‘PM’s housing guru Roger Scruton sacked after going on racist rant,’ read one headline the next day. ‘No. 10 adviser sacked over “white supremacist” views,’ ran another, the additional libel having been added courtesy of the Labour MP Dawn Butler.
But what had the philosopher actually said — and had he been fairly represented? No one who called for his resignation tried to find out. Not Mercer, Tugendhat, Finkelstein, Osborne, Brokenshire or any of the rest of them. The story was too good. Scruton later asked for the tape of the interview that got him sacked to be released, so everyone could hear what he said (or did not say). Many others then joined this call, but Mr Eaton went very quiet. Having acquired a copy of the recording of the interview, I know why.
Rather than a set of ‘outrageous’ remarks, let alone a ‘rant’, the recording shows Scruton speaking in his usual calm, thoughtful, professorial manner (though audibly labouring through a chest infection). Eaton asks the following question of a man he will subsequently label a ‘homophobe’: ‘On homosexuality you’ve been criticised by some for saying, for instance, homosexuality’s not normal. But that seems to be a statement of fact…’ This is said with a laugh. Answering, Scruton carefully explains his views on homosexuality, saying his remarks came from a book about sexual desire that he wrote 30 years ago. ‘I actually argued that it’s not a perversion,’ he says. ‘But that it is different. Then people take little sentences out of context.’ He adds that ‘the learned editors of [the website] Buzzfeed’ like to take such remarks out of context and ‘put together a kind of patchwork of offences without bothering to examine arguments or anything like that. So you get caricatured as a particular kind of thing. As though you were somebody who wants to stone homosexuals to death or something. Just because you said that it’s different.’


And the supposedly ‘outrageous remarks’ about ‘Hungarian Jews’? It is an interesting reminiscence about Viktor Orban. Scruton has known Orban since communist days and criticised him. ‘I think power has gone to his head,’ he says. ‘He’s made some decisions which are very popular with the Hungarian people. Because the Hungarians were extremely alarmed by this sudden invasion of, um, huge tribes of Muslims from the Middle East. And you have to remember that their history of their relation with Islam is not a happy one.’
Is ‘invasion’ the most diplomatic word to use about the migrant wave of 2015? Perhaps not (at another point, Scruton talks about how Momentum ‘invaded’ the Labour party) but the question really ought to be: does the government regard use of this word as a sackable offence?
He is invited to recall that he had previously been accused of anti-Semitism for using the phrase ‘Soros empire’. ‘Is that what I did wrong?’ he laughs. ‘I was talking about Hungary at the time, wasn’t I? And anybody who doesn’t think that there’s a Soros empire in Hungary has not observed the facts.’ The facts, in this case, are that the Soros operation is famously large. But how can this remark be seen to be anti-Semitic? By not including what he said next. ‘It’s not necessarily an empire of Jews — I mean that’s such nonsense.’ He then laments the ‘legacy of anti-Semitism in Hungary’, adding ‘If you had a political movement in Hungary which excluded the Jews in some way you’d be damn foolish, because they are the ones with the minds.’ A little harsh on Hungarian gentiles, perhaps, but hardly an example of the anti-Semitism his interviewer would accuse him of once he’d left.
Again and again, Eaton tries to lure Scruton on incendiary matters (‘Some conservatives would say knife crime is really a black problem’) but to no avail. After laboriously trying to get comment on the leadership contenders in both main parties, he finally asks: ‘How do you feel about humanity’s future?’ Scruton is a bit thrown. ‘Um, gosh. You’re talking about all the trans-humanist stuff or all that?’
Eventually he goes on to say: ‘I think there are difficulties around the corner that we are ignoring, like the rise of China. There is something quite frightening about the Chinese sort of mass politics and the regimentation of the ordinary being. I think that the… We invent robots, and they are in a sense creating robots out of their own people, by so constraining what can be done that each Chinese person is a kind of replica of the next one and that’s a very frightening thing. Maybe I don’t know enough about it to be confident in making that judgment but the politics is like that, and the foreign policy is like that. And the concentration camps have come back, largely there to “re-educate” the Muslims and so on.’
So not a racist rant, but a measured and careful expression of concern about the Chinese authorities, concluding with a reference to the appalling mistreatment of China’s Uighur Muslims. A reference that was never included in the interview since it would complicate the picture of the philosopher as an ‘intemperate’ bigot. As would his similarly unpublished observation that ‘Muslims who settle into the Meccan way of life are obviously perfect citizens. They have the inner serenity that the citizen should have. We ought to learn to appreciate that — and encourage it.’ Hardly the cry of the vicious anti-Muslim figure Eaton would go on to describe.
These manipulations of Scruton’s words had their desired effect. In a way, the Scruton case offers a parable of our times. For generations, interviewers have sought to make mischief with quotes — but before, they tended not to result in people being fired before teatime. There is now an established pattern. Once an ostensibly reputable source spins a line, the Twittersphere finds its latest object of outrage. As soon as prominent people join the mob (celebrities, activists), the campaign against the individual intensifies. Weak politicians who want to be seen to be reacting fast try not to get caught behind developments. As Henry Kissinger said recently: ‘Information threatens to overwhelm wisdom.’
But while certain Conservative politicians seem set on appeasing what they take to be the spirit of the age, they might have misjudged the turn. Soon after Scruton’s sacking, it started to become apparent that the quotations had been manipulated and that the philosopher had lost his job because government had cowered in front of the mob. Jason Cowley, the magazine’s editor-in-chief, said: ‘The New Statesman takes journalistic good practice seriously. As any responsible media organisation would, we are conducting an internal review in light of allegations of misrepresentation. George Eaton has already apologised for his behaviour on social media and his thoughtless Instagram post, which he deleted.’ Mercer and Tugendhat both ended up being forced to issue half-apologies. Those who were most angry were young people, who have grown to loathe this social media hate-mongering.
Their instincts are right. Our world is replete with complex matters that need discussing. We need philosophers, thinkers and even politicians of courage to help us find our way through this. We live in the age of character assassination. What we now desperately need is a counter-revolution based on the importance of individuals over mobs, the primacy of truth over offence, and the necessity of free-thought over this bland, dumb and ill-conceived uniformity.
Posted by jtf at 9:09 AM