By Stan Fischler
https://thehockeynews.com/news/article/stan-fischler-remembering-red-kelly-a-superstar-like-no-other
May 3, 2019 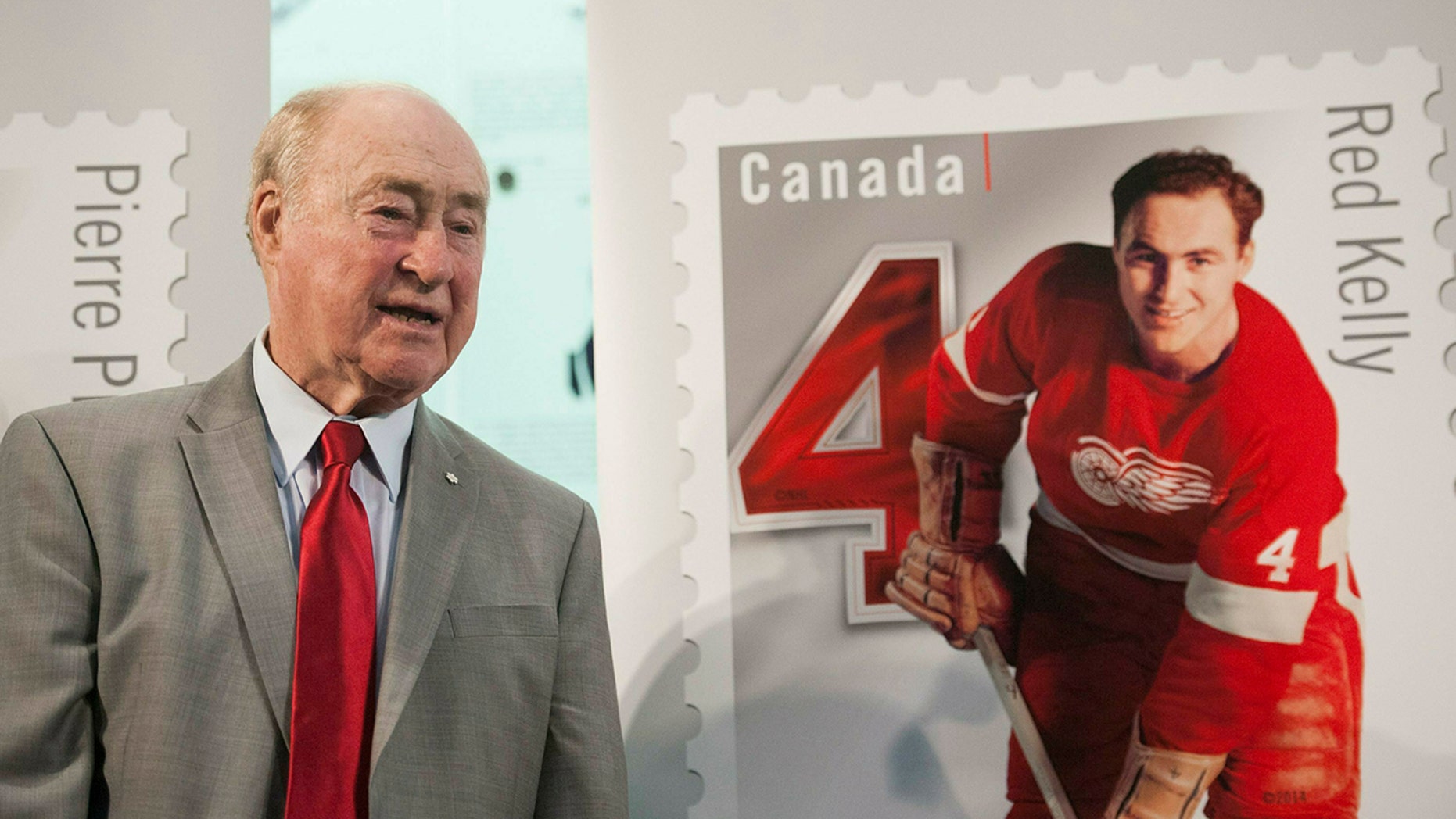 Without any fear of contradiction, I will firmly and unequivocally state that Leonard ‘Red’ Kelly was the most unique, underrated and undervalued superstar I have ever seen.
Since I began watching hockey at (old) Madison Square Garden in 1939, my statement covers 80 years, and since Kelly entered the NHL in 1947, that makes it 72 years, if you will. I was 15 years old and Red was 17 when he signed with Detroit. In fact, one could make a case for Red as the greatest player of all-time, depending on your set of hockey values.
Let’s start with the obvious. No player in history broke into the NHL as a defenseman and proceeded to become a Hall of Fame backliner during his dozen-year career with Detroit, where he won four Stanley Cups with the Red Wings. Then, playing for seven-and-a-half more seasons with the Toronto Maple Leafs, he transformed into a Hall of Fame center and the orchestrator behind major domo Punch Imlach’s four Stanley-Cup winners at the corner of Carlton and Church. That gave Leonard a grand total of eight Stanley Cup rings.
As an innovator, Kelly was way ahead of the game. Bobby Orr is mistakenly credited with being the first defenseman who became a modern-day offense-man, or rover, if you will. With little fuss and fanfare, Red was doing that before Bobby was born. I vividly remember taking a trip to Montreal for a Red Wings-Canadiens game in 1953. My purpose was to see how The Forum exploded when Rocket Richard scored a goal. Well, I was stunned to the very core. The Rocket went scoreless, but the 2-0 Detroit victory was the result of two magnificent rushes by Red.
It was Kelly’s very ability to smoothly bob and weave his way through enemy defenses that eventually inspired Imlach to move this amazing stickhandler up to center. And, let’s not forget, that the arrestingly productive young Frank ‘Big M’ Mahovlich – Red’s left wing in Toronto – became a Hall of Famer himself because of Kelly’s mentoring, not to mention radar passes.
Kelly was unique in so many ways. In a sport that’s often a war game on ice, Kelly unfailingly was the league’s gentleman star. Teammates never would hear filth from his mouth. “By Hum!” could have been his most angry words in the heat of a game. And, yet, there was another dimension – toughness – that often was ignored as part of the Kelly repertoire. Oh, boy, could this guy fight. I vividly recall the extraordinarily bitter Detroit-Toronto 1950 playoff semifinal Game 1. That was the one that resulted in a near-career-threatening injury to Gordie Howe for which the Motor City crew blamed Leafs captain Ted Kennedy. As a result, Game 2 was like a Pier Six brawl on ice. This time Kelly stepped out of character, fighting one of the toughest Leafs – I believe it was Vic Lynn – and Red was not the loser.
I’ll give another note that few remember. Red took a stance during the 1959-60 season that became the predecessor of free agency. Following a contract dispute with Jack Adams, the Wings boss traded Leonard to the New York Rangers with forward Billy McNeill. “I retired rather than go to New York,” Red insisted. The NHL was rocked by his decision, and the furor eventually abated when a deal was cut with Kelly winding up in a trade to the Leafs. History was made on the night of Feb. 10, 1960 in a game against the Habs. “I want you at center, going up against Jean Beliveau,” said Imlach. (Beliveau just happened to be the best center in the league.) Punch liked what he saw, put Kelly on a line with Big M and Bob Nevin, and the Leafs were off to the races.
I defy any historian to come up with a player who performed such a unique transformation. I might add the soft-tempered Red skated under two of the most demanding – some would say hateful – leaders in Adams and Imlach. Jack’s problem in Detroit reminded me of why the Leafs didn’t originally sign Red back in 1946 when he was skating for St.Michael’s College with future NHLers Ted Lindsay and Jim Thomson. “The Toronto scout,” Red recalled, “didn’t want me because he said I wouldn’t last in the NHL for 20 games.” Likewise, Adams blew it when he figured Kelly’s legs were gone by 1959 and eventually unloaded him. So, Red went out and won four Cups and Adams got zilch. Kelly went on to enjoy both a coaching and political career, but I only got to know him personally after his retirement. Each year Kelly and his lovely wife, Andra, would show up at the annual Canadian Society of New York Hockey Awards dinner. It was then that I got to appreciate his warmth and sincerity. Those seemingly insignificant hockey chats remain among my fondest memories in more than a half-century on the hockey beat. But when I look back at my opening statement that Red could be evaluated as the greatest of all time, it’s not an idle throwaway line.
Look at it this way: More than Wayne Gretzky, more than Eddie Shore, more than Mario Lemieux or Bobby Orr, Red Kelly mastered every aspect of positional hockey, except goaltending. To this day he remains the most underrated superstar to come down the pike. Yet his dossier cannot be disputed. He was the balance wheel of champions as a defenseman in Detroit, and, as a center, the most decisive factor in creating a dynasty in Toronto more than a decade later. No other hockey player can make that statement.
When I brought these facts up to Kelly at one of the Canadian Society hockey dinners, he blushed as usual, which prompted me to tell him: “Red, you only had one problem as a hockey player, you never had a good press agent!”
Otherwise, Red Kelly would have been The Great One before The Great One!
Want more in-depth features, analysis and an All-Access pass to the latest content? Subscribe to The Hockey News magazine.
Posted by jtf at 4:23 PM