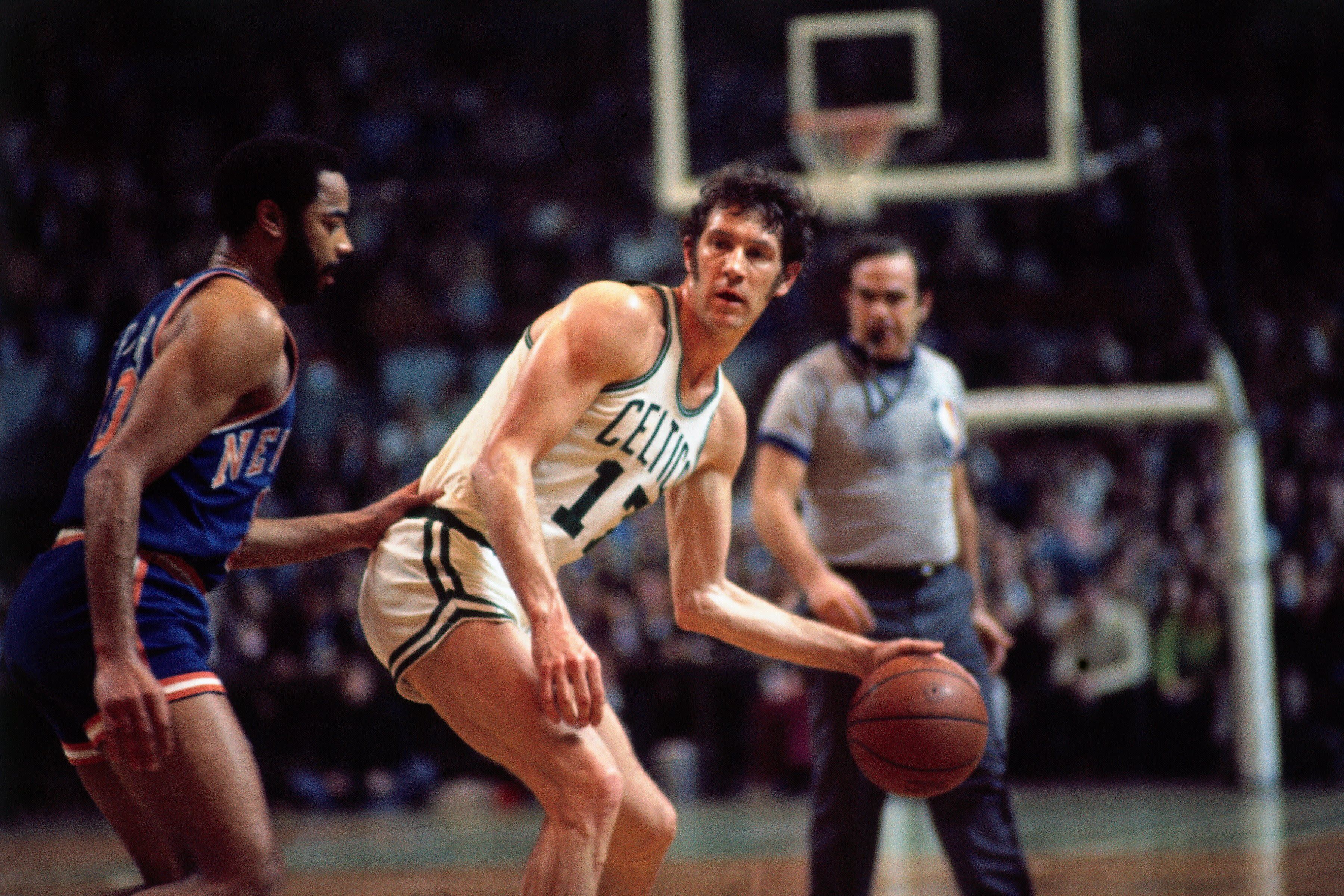 
John Havlicek, who perfected the role of the “sixth man,” or the first player off the bench, during a 16-year Hall of Fame career with the Boston Celtics in which he was a catalyst in propelling the team to eight NBA championships, died April 25 in Jupiter, Fla. He was 79.
The Celtics announced his death. He reportedly had Parkinson’s disease.
Mr. Havlicek came to Boston in 1962, after a stellar college career at Ohio State, where he helped lead the Buckeyes to a national title in 1960 and two other appearances in the NCAA’s championship game.
He had a relentless, unselfish style of play, highlighted by constant movement and tenacious defense. He joined the Celtics at a time when the team, coached by Red Auerbach, was a seemingly unbeatable dynasty. From 1957 to 1969, the Celtics won 11 NBA championships.
The first time Auerbach saw Mr. Havlicek in a practice session with the Celtics, he was “flabbergasted at what Havlicek was showing us. Here he was, not having touched a basketball for months and he was far and away the best man on the court.”
When Mr. Havlicek was growing up in a small town in Ohio, his parents did not give him a bicycle. As a result, he ran everywhere, building up remarkable stamina and speed. It was a skill that proved invaluable on the basketball court, where he was utterly tireless and never seemed to break a sweat.
“I knew from the first time I played this game,” Mr. Havlicek told Sports Illustrated in 1974, “that the toughest guy to score on was the guy who kept after me all the time, nose-to-nose, basket-to-basket. The opposite is also true. The toughest guy to defend against is the guy who keeps running. Who never lets up. Never lets you relax.”
He joined a Boston team that included such future Hall of Fame players as point guard Bob Cousy, center Bill Russell, forward Tom Heinsohn and guards Sam Jones and K.C. Jones. Even though he came off the bench, Mr. Havlicek played the third-most minutes of any player on the team, providing defensive intensity and a spark to the offense.
He became a key part of the Celtics’ signature fast-break offense, as Russell cleared the boards and fired outlet passes down the court. At 6-foot-5, Mr. Havlicek was seemingly too big to play the guard position and too small to be a forward, so he alternated between the two, practically creating a hybrid position of his own.
“No one in the league his size is even close to Havlicek in quickness,” Los Angeles coach Fred Schaus said in 1966.
Mr. Havlicek’s slashing style of play wasn’t always pretty, but it was ruthlessly effective. He was always in position to grab offensive rebounds and to make passes to open teammates. On defense, he was often called on to guard the opposing team’s top scorer.
“I prided myself on my ability to come off of the bench and change the tempo of the game, both offensively and defensively,” Mr. Havlicek told the Ohio State student newspaper in 2011. “I figured that nobody could name all of the players who started in the NBA at that time. But if I could become the best sixth man in the league, everyone would know who I was.”

During his second year in Boston, as the Celtics continued to dominate the league, Mr. Havlicek led the team in scoring, while still entering the game from the bench as the sixth man. The next year, the 1964-65 season, the Celtics were pushed to the brink in the Eastern Division playoffs against the Philadelphia 76ers, led by Wilt Chamberlain.
With five seconds left in the seventh and deciding game, Boston clung to a one-point lead, 110-109, but Philadelphia had possession of the ball. The Sixers’ Hal Greer threw a long inbounds pass toward Chet Walker, which Mr. Havlicek tipped toward his teammate Sam Jones.
Radio announcer Johnny Most then made what is still the most famous broadcasting call in Celtics history: “Greer putting the ball in play. He gets it out deep and Havlicek steals it! Over to Sam Jones! Havlicek stole the ball! It’s all over! . . . It’s all over! Johnny Havlicek stole the ball!”
Ecstatic Boston fans mobbed Mr. Havlicek, tearing off his jersey. The Celtics went on to cruise past the Los Angeles Lakers in the NBA Finals.
During Mr. Havlicek’s first four years in Boston, the Celtics won four titles. Auerbach stepped down as coach after the 1966 season and was replaced by Russell, who became the NBA’s first black coach while continuing to anchor the team at center.
As other players retired, Mr. Havlicek’s role grew, and he and Russell were the core of a Celtics team that won NBA championships in 1968 and 1969. Years later, Russell said of his longtime teammate, “He is the best all-around player I ever saw.”
John Joseph Havlicek was born April 8, 1940, in Martins Ferry, Ohio. He grew up in Lansing, Ohio, a small town near the West Virginia border, where his parents ran a grocery store.
In high school, Mr. Havlicek was an all-state athlete in football, basketball and baseball and acquired his nickname, “Hondo,” after a John Wayne movie. He was was recruited by dozens of colleges but chose to attend Ohio State. Buckeye football coach Woody Hayes said Mr. Havlicek was the best quarterback on campus, but he stuck to basketball and baseball in college.
Freshmen were not eligible for varsity play in those days, but as a sophomore Mr. Havlicek started for an Ohio State team under coach Fred Taylor that won the 1960 NCAA title over California, 75-55. (His teammates included Hall of Famer Jerry Lucas, Larry Siegfried — who later played for the Celtics — and Bobby Knight, who became a Hall of Fame coach.)
Ohio State returned to the championship game in 1961 and 1962, only to lose both times to the University of Cincinnati. During Mr. Havlicek’s three years, Ohio State had a record of 78-6.
After graduating in 1962, Mr. Havlicek was drafted by the Celtics and by the NFL’s Cleveland Browns, even though he hadn’t played football since high school. He was one of the fastest players in training camp and almost made the team as a wide receiver before focusing on basketball.
In the 1970s, the Celtics rebuilt around Mr. Havlicek, who led his team to NBA titles in 1974 and 1976. The 1976 championship series over the Phoenix Suns featured a triple-overtime victory by the Celtics in Game 5 that has been called the greatest game in NBA history. Despite an injured foot, Mr. Havlicek played 58 minutes out of a possible 63, scoring 22 points in the Celtics’ epic 128-126 victory.
In his final game, Mr. Havlicek scored 29 points; his No. 17 was soon retired by the Celtics. Playing his entire career before the introduction of the three-point shot, he averaged 20.8 points per game, and he remains the Celtics’ all-time leading scorer. He was a 13-time All Star and was inducted into the Naismith Memorial Basketball Hall of Fame in 1984.
In retirement, Mr. Havlicek owned several Wendy’s fast-food franchises and was successful in other business ventures.
Survivors include his wife of 51 years, the former Beth Evans, and two children.
In 1996, the NBA named Mr. Havlicek one of the 50 greatest players in the league’s history.
“There isn’t anything on a basketball court he can’t do,” Auerbach said. “John Havlicek is what I always thought a Celtic should be.”
Posted by jtf at 6:06 AM