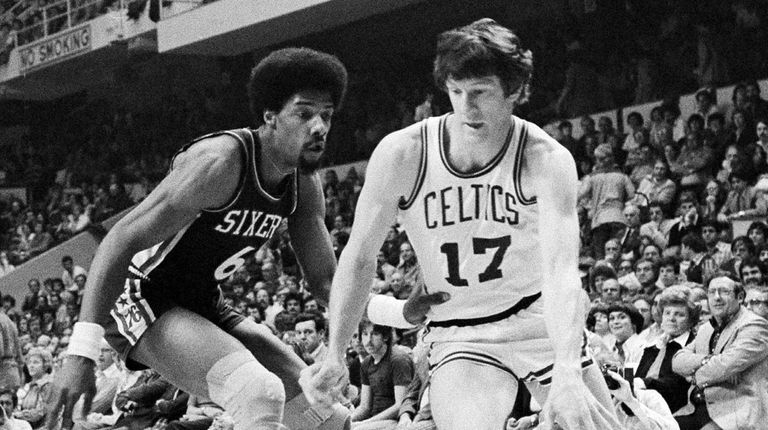 The Celtics' John Havlicek moves the ball past the 76ers' Julius Erving during an NBA game in Boston on April 29, 1977. Photo Credit: AP
The late David Halberstam was infatuated with Larry Bird, who, he proclaimed, was “authentic.”
Following that lead, I would label John Havlicek as “genuine.”
The listed synonyms for genuine include true, pure, actual, unaffected, sincere, and, yes, authentic.
Yes, I think that covers it. John Havlicek was a genuine superstar basketball player and an exemplary human being.
Paul Westphal, who observed Havlicek as both a teammate and an opponent, may have summed John up as well as anyone ever has. “John Havlicek,” he says, “was exactly who he was supposed to be. He deserved the respect he had.”
I can speak from the vantage point of a 23-year-old kid who found himself plopped without warning or any kind of direct preseason preparation into NBA coverage two days before the 1969-70 season opener. No one could have been more welcoming or accommodating to the rookie writer than John Havlicek, then 29 years old and in the midst of a five- or six-year span when he was, quite simply, the best basketball player in the world, and, yes, I am well aware that both Oscar Robertson and Jerry West were still quite viable. It was a professional thrill and privilege to write about Havlicek’s brilliant playing. And it was a personal thrill to make the acquaintance of a true basketball luminary who treated everyone with courtesy and respect.
He was as cooperative and helpful to a college kid with a credential as he was to, say, a Frank Deford from Sports Illustrated. No one ever came away from an encounter with John Havlicek saying, “Geez, what’s wrong with that guy?”
We wound up doing a book and, while I’m not apologizing for it, I can truthfully say I wish I had done a better job. I was flattered and honored when he asked me to work with him, but it was my first experience in the “As-told-to” business and I was still intimidated by the aura of the man. He had more to give than I ever asked for. He deserved better than me. After all, he was John Havlicek. OK, let’s get one thing straight right now. He will forever be acclaimed as the best sixth man in basketball history, and indeed he was. But I feel that association actually does him a grave disservice.
Remember how Red Auerbach always said that who started a game wasn’t as important as who finished it? Few people realize that while Havlicek was a sixth man in the earlier stages of his career, that as early as his rookie season in 1962-63 he was third on the Celtics in minutes played. Or that he was second in Celtics minutes the following season. Forgotten, too, is the fact that by Year 2 he was already the team’s leading scorer. Bringing John Havlicek off the bench was a winning strategy; that’s all. And there was no other team in the league that even remotely had the luxury of bringing a player such as Havlicek off the bench.
By the time he stole that famous 76ers inbounds pass on April 15, 1965, Havlicek was already identified as an elite player. But there is no question that play, and the accompanying Johnny Most call (which led to an album of Celtics highlights), gave him a distinct identity. “I was starting to make inroads,” Havlicek once explained. “But after that play people realized I was going to be around for a while. And the album definitely influenced the way people thought of me.”
The truth is the way people who knew John Havlicek thought of him was borderline awe. Take Bob Knight, for example. The first time I met the fiery coach was when John introduced me to him in Cleveland following a Cavaliers game. Bob Knight was deferential to the point of — I know how crazy this sounds — meekness. I have since been told that is the normal state of affairs when Knight was around his old Ohio State teammate. The flip side was that when they were in school John was himself in awe of Knight’s sheer worldliness. John had grown up in a very insular world, bounded by city blocks, not highways.
“Bobby Knight knew things,” John once explained.
John Havlicek was who he was and that was a shy kid of modest means from a small Ohio community located across the river from Wheeling, W.Va. There was little room for extravagance or frivolity in the Havlicek household. During the recruiting process, Ohio State basketball coach Fred Taylor called to say he was coming to town and he would take the family out to dinner. When Coach Taylor arrived, John was still playing a high school baseball game. Taylor noticed that the dinner table had been set. Mom Havlicek hadn’t quite gotten the message. She assumed Coach Taylor had said he was coming to dinner. After all, no one the Havliceks knew ever ate dinner out.
I’m sure you’ve already read or heard all the stories about John being so meticulous that he hung his executive socks on a hanger in the locker room or how his locker always looked as if the general were coming for inspection. All true. Or how he would look at you in disbelief if he thought you hadn’t trimmed every sliver of fat off that steak in front of you. 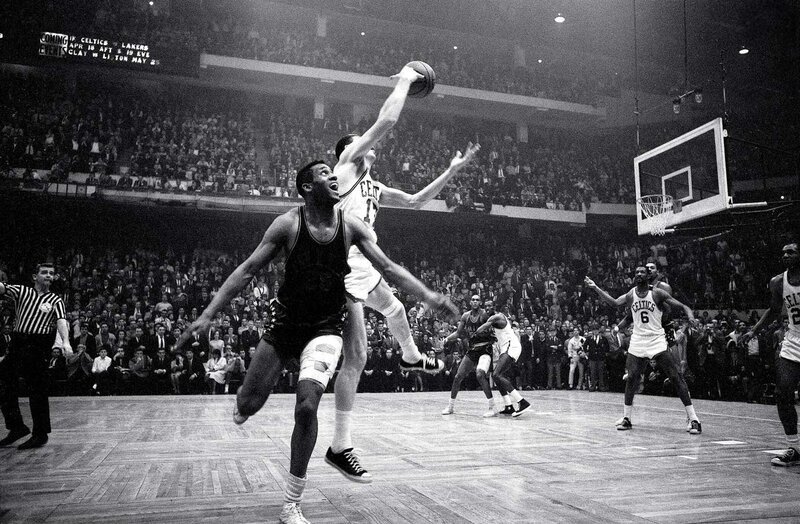 "Havlicek stole the ball!" Celtics broadcaster Johnny Most's call describing the final seconds of Game 7 of the Eastern Division Finals is one of the most memorable in NBA history. Boston held on to a 110-109 victory over the Philadelphia 76ers after John Havlicek tipped Hal Greer's inbounds pass, intended for Chet Walker, toward teammate Sam Jones. The Celtics would go on to win their seventh consecutive NBA title, defeating the Lakers in five games.(Walter Iooss Jr./Sports Illustrated)

Another aspect of the Havlicek legend was that he was, well, charmingly thrifty. In those days, first-class flyers had the option of taking little nips of whiskey to make drinks. John was famous for commandeering as many as he could, and one night we found out why.
The Celtics clinched their 1972 first-round playoff series against the Hawks on a Sunday afternoon in Atlanta and immediately flew home. John had a celebratory gathering that evening at his apartment in Melrose, and John being John, of course my wife and I were invited. He opened a cabinet and there must have been a thousand of those little nips. Drink up, fellas!
Back to basketball. It is customary in sport when someone new comes along to ask, “Well, who does he or she remind you of?” In this case the question is who is the contemporary John Havlicek?
The answer is nobody. John’s last game was on April 9, 1978. In the ensuing 41 years, no player has played the game in a manner remotely resembling John Havlicek. Ray Allen was cited for moving without the ball, as is Stephen Curry is today. The acclaim for both rests solely on offense. John Havlicek was the consummate two-way player. It is difficult to explain Havlicek to someone who never saw him play because there is no frame of reference. None.
There is a new phenomenon in the NBA called “load management.” Perfectly healthy players are withheld from games for a “rest.” So check this out: The Celtics defeated the Lakers for the title, winning in six in 1968 and seven in 1969. In those 13 games, totaling 629 minutes (Game 5 in ’68 went to OT), care to guess how many of those minutes John Havlicek played? Hmm? How about 627. No typo. He sat less than two minutes out of those 13 playoff games. This is why I don’t want him damned by the faint praise of being a great “sixth man.”
Here is how John Havlicek concluded our book: “I’d like people to think of me as a guy who moved from a humble background in an obscure area into the limelight without changing his basic nature. I would like to be thought of as an athlete who enjoyed the sport itself rather than any controversy he could create surrounding the sport. I would like people to feel I had done something to enhance not only myself but the entire sport.”
Imagine if we could clone a million John Havliceks and spread them through all organized sport. Why, we could Make Sport Great Again.
Bob Ryan’s column appears regularly in the Globe. He can be reached at ryan@globe.com.
Posted by jtf at 7:56 AM