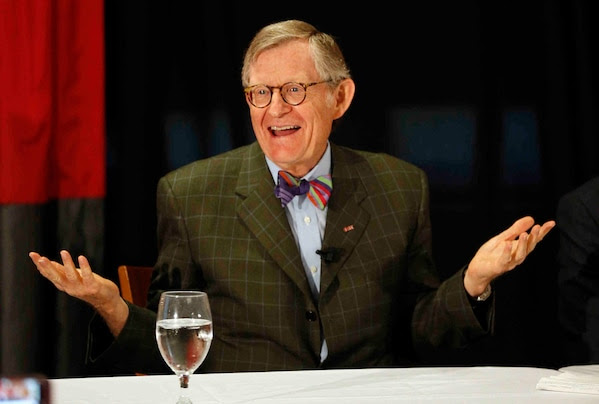 Adam Cairns/Associated Press - Ohio State President Gordon Gee discusses his decision to retire in July at a news conference last Wednesday. Gee's announcement followed news of controversial remarks he made about other schools and conferences in December.

It was Shakespeare who wrote, “Fatigue makes cowards of us all.” It was Vince Lombardi who applied the Bard’s words to football.

If Shakespeare and Lombardi were still around today, they might say this about college presidents: “Big-time athletics makes fools of them all.”

That might be the best explanation for what seems to happen almost anytime a college president thinks he — or she — has all the answers when it comes to what those in the news business often mistakenly refer to as “the toy department.”

Regardless of how much college sports may appear to be for children and those of us who would still like to be children, it is a multi-billion-dollar industry. Anyone who thinks that they are the smartest person in a roomful of jocks on the basis of a Ph.D in English Literature or World History will often walk out of the room having made a fool of himself.

Recently, we have the examples of Gordon Gee, who talked his way out of the job as Ohio State’s president, and Robert Barchi, who somehow remains as the president of Rutgers.

Gee has been the president of five colleges — more than anyone ever, according to his biography. The assumption — and it may be a dangerous one — is that he must be pretty bright. Gee is 69 with a penchant for wearing bow ties and putting his expensive shoes into his mouth on a remarkably regular basis.

A few years back, concerned that Ohio State might somehow lose millions of dollars if it was passed over for a Bowl Championship Series bid by either unbeaten Boise State or unbeaten TCU, Gee said neither team deserved a BCS bid because a lot of the teams on their schedule couldn’t beat “The Little Sisters of the Poor.”

Gee also made the mistake of being honest when asked if Coach Jim Tressel might be fired in the wake of the tattoo-parlor scandal that led to Ohio State being investigated and sanctioned by the NCAA. “I’m just hopeful,” he said, “that the coach doesn’t fire me.”

That line will be Gee’s epitaph at Ohio State, even though it was the remarkable string of insulting comments he made last December at an Ohio State athletic council meeting that ultimately brought him down.  Gee insulted Catholics — “can’t trust those damn Catholics,” he said, in reference to the leadership at Notre Dame; everyone in the Southeastern Conference — “they should learn to read and write”; the University of Louisville — not worthy of the Big Ten academically; and Arkansas football Coach Bret Bielema — “a thug,” whom Wisconsin Athletic Director Barry Alvarez was glad to be rid of when he left last winter.

Remarkably, Gee probably would have survived if the Associated Press hadn’t made a public-records request for the tape of that meeting. After Gee’s comments went public, he announced his “retirement.”

Barchi, on the other hand, appears to have been preparing for a forced retirement since the day last September when he became president of Rutgers. When Tim Pernetti, then the athletic director, came to Barchi last December to tell him he had tapes of Mike Rice, the school’s men’s basketball coach, behaving very badly during practice, Barchi basically told him to run along and deal with it. He was — he said later — just too busy to actually look at the tapes.

Pernetti — no genius himself — decided to suspend Rice for three weeks and hope the tapes never went public. Of course they did, costing Rice and Pernetti their jobs, which was remarkable since one would have thought that the president of the school, having been offered the chance to look at the tapes and having said no, might be held responsible.

Eddie Jordan was hired as basketball coach, a hire that made sense seeing as how Jordan played for Rutgers the last time the program mattered, in the 1970s. What didn’t make sense was introducing Jordan as a “Rutgers graduate” when a check with the registrar’s office would have made it clear that he was not a graduate.

Julie Hermann, left, sits with Rutgers president Roberet L. Barchi, as they listen to a question during a news conference where she was introduced as the new athletic director at Rutgers University on Wednesday, May 15, 2013, in Piscataway, N.J. Hermann was a senior associate athletic director and senior woman administrator at the University of Louisville. Rutgers has been looking for a new AD since Tim Pernetti resigned on April 5, part of the fallout from the Mike Rice scandal. (AP Photo/Mel Evans)

Finally, there was the much-ballyhooed hiring of Julie Hermann as athletic director. Hermann was the No. 2 person in the Louisville athletic department and a rising star in college administration. Rutgers paid the Parker Executive Search firm $70,000 to identify candidates and it came back with 47 names — none of them Hermann.

Maybe Parker knew that Hermann had been involved in two lawsuits — one while a coach at Tennessee, the other while at Louisville. Maybe it knew that lurking somewhere was a letter written by every member of the 1996 Tennessee volleyball team that she had coached in which her players accused Hermann of calling them — among other things — “whores, alcoholics and learning disabled.”

Search committee co-chair Kate Sweeney, who was appointed by Barchi, either failed to do due diligence (a pattern here, no?) or in her zeal to get the job for Hermann chose to ignore all of Hermann’s past issues. Hermann got the job and — darn if it didn’t happen again — embarrassing information came to light soon after.

Hermann’s first response when the Newark Star-Ledger asked about the letter signed by her players at Tennessee (she resigned soon after it was presented to her) was to deny any memory of it. Sure, easy stuff to forget no doubt.

Ten days later, after Rutgers hired a crisis-management firm to coach her, Hermann said her experience at Tennessee made her “uniquely qualified” to lead Rutgers in the wake of the Rice-Pernetti-Barchi-Hermann (and everyone else in the state of New Jersey) fiasco.

Maybe he’s the smart one in all this. He knows that when a college president opens his mouth and the subject is athletics, the result isn’t going to be pretty.

For more by John Feinstein, visit www.washingtonpost.com/feinstein.
Posted by jtf at 5:32 AM