IRS taxing of tanning beds and other Obamacare absurdities 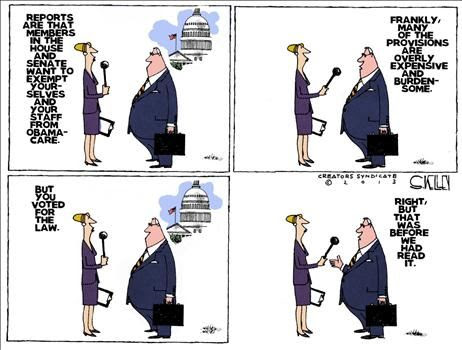 It is reassuring that amid so much government dysfunction, the Internal Revenue Service has resolved the question of when and whether to tax tanning beds under the Affordable Care Act.
Do not be concerned about that giddiness you feel. You are not having a nervous breakdown but are suffering a symptom commonly associated with recognition that the absurd has become the accepted norm — and that you are, in fact, alone.


Indeed, the IRS’s tanning ruling comes in the nick of time. Amid incessantly breaking news — NSA surveillance, IRS political targeting, DOJ seizing — Americans were beginning to feel that no one over the age of 12 was in charge. The finger-pointing and blame-shifting have been a feast of cannibalizing acronyms.
“The CIA did it.”
“IRS pleads the Fifth.”
“They’ve gone rogue in Cincinnati.”
What? No DOJ to rehab?
But the night is young.
Lest you wilt from suspense, the tanning bed challenge has been resolved as follows: Obamacare, the concision of which even President Obama prefers to the name “Affordable Care Act” (ACA), calls for a 10 percent sales tax every time some pale face exposes himself to potentially harmful, cancer-causing rays, thus affecting everyone’s health-insurance premiums. (Note to tanning bed businesses: Buh-bye, now.)
But, wait, there’s an exception: If such beds are offered as part of a gym or fitness centerat no extra charge, no tax will be imposed.
Note to citizens: If you have inferred from the preceding that “risky” behavior will result in higher taxes, you get a blue ribbon in dot-connecting. Please join the National Security Agency.
Despite the IRS’s impressive resolution of the tanning bed conundrum, one is struck by the unfortunate timing of its several displays of (a) incompetence and/or (b) ideologically driven harassment — just when the agency is charged with implementing and overseeing large swaths of Obamacare.
As you doubtless recall from your careful reading of the health-care legislation way back in 2009, the act includes at least 47 new tax provisions. Also, recall that the Supreme Court ruled in favor of the ACA’s individual mandate (you must buy insurance or else) by categorizing the mandate as a tax.
Which is to say, the IRS has some big work ahead. No one seems to know how much, though running estimates are that thousands of new agents will be needed.
In addition to deciding which organizations qualify for tax-exempt status, as in the case of tea party and patriot organizations recently targeted for prolonged, special scrutiny, our nation’s revenuers will also be redefining “religious.” Determining whether a religious or charitable institution qualifies for tax-exempt status has always been part of the IRS’s dubious bailiwick, but Obamacare has upped the ante by requiring some religious affiliates to provide health care — such as contraception — that violates their conscience.
Whatever one’s personal positions on reproductive matters, the historically higher standard of individual conscience has been scuttled by the Obama administration in deference to a universal health-care plan that leaves the definition of religious organization and, therefore, conscience to a bureaucracy of accountants.
Even if one were disinclined to care much about other people’s moral beliefs, there’s something disconcerting about the conga linecrowd determining what constitutes religious enough. Those deemed not truly religious will be denied conscience protections, as has already occurred. Among other consequences, many charitable organizations that have served society’s least fortunate will have to shutter their doors, inviting new legions to rely on taxpayer-funded social services.
Or is this, indeed, the point? Dependency, after all, is a constituency with life tenure.
Such concerns may seem remote, but freedom of conscience is fundamental to other freedoms we similarly take for granted. Obamacare largely dismisses such considerations, and its punitive nature soon will be felt by more than those burdened by conscience. Come next January, as insurance rates climb and many businesses opt to pay government fines, sending their workers into government exchanges, all those people who believed, as promised, that they could keep the insurance they like will learn otherwise. Oops.
At the center of these disappointments and revelations will be the nation’s new, expanded army of tax enforcers — this time examining not just your beliefs but also your medical records.
No worries. Once you’re medicated, the anxiety passes quickly. Eventually you will forget when everything wasn’t absurd. And you won’t be alone anymore.
Read more from Kathleen Parker’s archive, follow her on Twitter or find her on Facebook.

Read more on this topic:
Robert J. Samuelson: The fog of Obamacare
Dana Milbank: Republicans go after Obamacare. Again.
Matt Miller: Obamacare gets its vindication
Michael Gerson: The unwelcome role of the IRS in Obamacare
The Post’s View: Obamacare’s tricky next phase
Posted by jtf at 7:01 AM