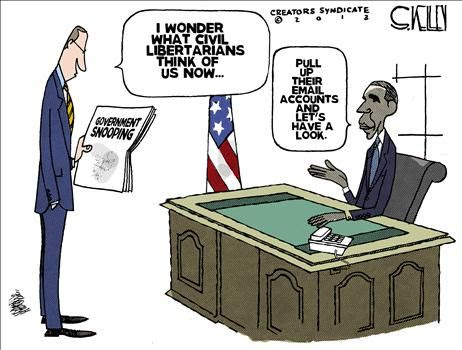 SAN JOSE, Calif. -- "Nobody's listening to your phone calls," President Obama proclaimed at a Friday event that was supposed to be about California's implementation of the Affordable Care Act.

But that morning, the New York Times had reported that surveillance programs begun under President George W. Bush had been clearly "embraced and even expanded under the Obama administration." The Guardian had reported that the federal government directed Verizon to provide phone logs on a daily basis, not only of calls between the United States and abroad, but also calls "wholly within the United States, including local telephone calls."
Accordingly, Times reporter Jackie Calmes asked the president if he could assure the American people that the government doesn't keep "some massive secret database of all their personal online information and activities."
"You can't have 100 percent security and also have 100 percent privacy and zero inconvenience," the president replied. "We're going to have to make some choices as a society."
In defense of the phone surveillance program, Sen. Dianne Feinstein, a California Democrat, argued, "It's called protecting America." The program, wrote Slate's Will Saleton, "isn't Orwellian. It's limited, and it's controlled by checks and balances."
Most important: House Intelligence Committee Chairman Mike Rogers maintains that the program helped thwart a significant terrorist attack within the United States in the last few years.
Does that mean the government hasn't gone overboard? Obama suggested that the public can trust the government because the executive branch acts under the oversight of Congress and with the approval of federal judges.
Under that arrangement, however, the Department of Justice secretly subpoenaed phone records of Associated Press reporters and editors -- the news of which no doubt chilled any would-be whistle-blowers left in Washington.
With a judge's approval, the FBI obtained a warrant to snoop on Fox News reporter James Rosen, after charging that Rosen was a "co-conspirator" in the leak of classified information concerning North Korea -- a crime punishable by up to 10 years in jail.
Attorney General Eric Holder maintains that the FBI had to call Rosen a possible criminal in order to obtain a search warrant.
That's ridiculous. The government did not have to name Rosen as a probable co-conspirator. Also, if the search warrant application is true, the government not only knew the identity of the State Department consultant who leaked classified information on North Korea, but also had a strong case against him. According to the document, the consultant accessed the leaked report "at least three times" and his office phone made two calls to Rosen's phone at about the time the classified file was accessed.
"Anybody looking at this request would have seen this as an excessive act of surveillance," noted George Washington University law Professor Jonathan Turley. The government also searched Rosen's parents' phone records.
Holder told NBC's Pete Williams that he can fix what went wrong by reforming department guidelines -- which makes the country's top lawman completely incompetent or the boldest of liars.
The president who assured Americans that the government is not listening to their phone calls left Holder in charge of the investigation into his own misdeeds.
In USA Today last month, Turley dubbed Holder as Obama's "sin eater" -- a Beltway term for "high-ranking associates who shield presidents from responsibility for their actions."
Despite new revelations about Holder's excesses, Turley observed, "Obama hasn't asked him to resign. The clear import is that Holder's doing exactly what Obama wants him to do."
So do I trust the president when he says the government's metadata program represents "modest encroachments on privacy?" I trust him no more than I trust Eric Holder.
Posted by jtf at 7:59 AM