The Ghosts of Benghazi

This week’s hearings may spell the end of the administration’s storyline. 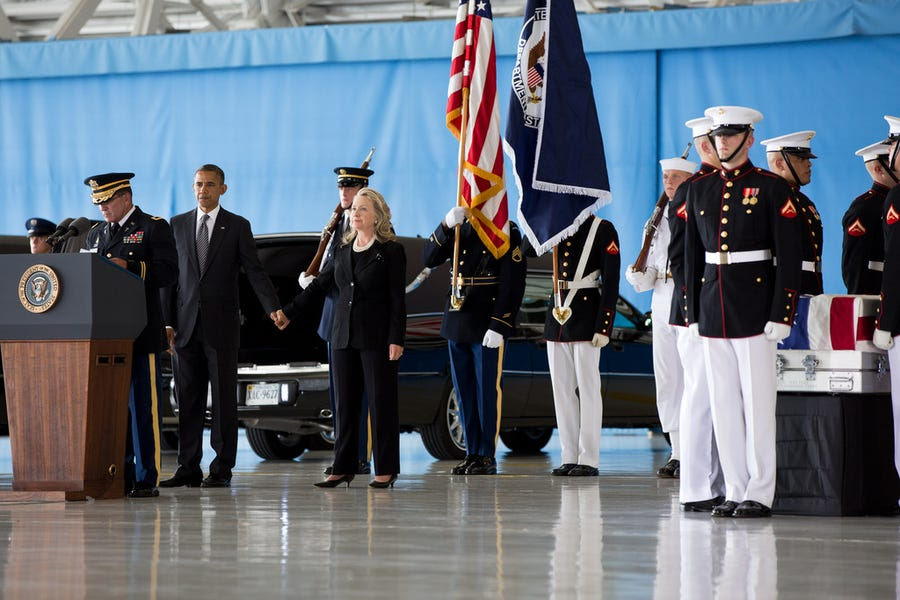 "President Obama grasps the hand of Secretary of State Clinton after his remarks during the ceremony at Joint Base Andrews, marking the return to the United States of the remains of J. Christopher Stevens, U.S. Ambassador to Libya; Sean Smith, Information Management Officer; and Security Personnel Glen Doherty and Tyrone Woods, who were killed in the attack on the U.S. Consulate in Benghazi, Libya."
(Pete Souza/Official White House photo)

My iPhone buzzes on a regular basis with “news alerts” from Politico, The Hill, and other sources. Politico provides breathless, this-cannot-wait-till-you-get-to-your desk “breaking news” sirens on every hiccup emanating from the White House. On April 22, for example, the news flash permitted me to learn without delay that: “President Barack Obama and first lady Michelle Obama will travel to Waco, Texas, on Thursday to attend a memorial service for the victims of last week’s explosion in West, Texas.”

When three career employees of the State Department announced their intention to testify before Congress — contradicting the Obama administration’s carefully constructed storyline about events in Benghazi — my phone was silent. News is very much in the eye of the beholder.

One of these whistleblowers, Gregory N. Hicks, was the deputy chief of mission at the American embassy in Libya and reportedly the last American to see Ambassador Chris Stevens alive. His testimony about the nature of the Benghazi assault should be illuminating. Mark Thompson, deputy coordinator for the State Department’s counterterrorism bureau, will apparently testify that former secretary of state Hillary Clinton was keen to obscure the terror links of the attackers in Benghazi and accordingly kept the counterterrorism officers at State out of the loop in planning the response to the attack.

In anticipation of the hearings that will begin on Wednesday, a few basic questions ought to be on the minds of members of Congress.

President Obama claimed repeatedly in the aftermath of the Benghazi attack that he would do everything in his power to ensure that the perpetrators were “brought to justice.” During the second presidential debate, Obama said, “We are going to find out who did this, and we are going to hunt them down, because one of the things that I’ve said throughout my presidency is when folks mess with Americans, we go after them.” Oh? For three weeks, American officials did not even visit the scene. On October 18, the New York Times reported that one of the ringleaders of the attack, Ahmed Abu Khattala, was sipping a strawberry frappe on the patio of a luxury hotel and scoffing at the idea that he should go into hiding.

He was right. No one has been brought to justice, and there’s little evidence that the Obama administration has made any effort. Just this past week, eight months after the attacks, the FBI released photos of three suspects. The Tashkent municipal police department could have moved faster.

If reporting by Stephen Hayes in The Weekly Standard and accounts of what the whistleblowers will say are correct, the shaky edifice of lies that the Obama administration erected about Benghazi is about to collapse.

Whistleblowers will confirm what has been reported before — that the administration knew within hours of the attack that it was a terrorist act. The CIA station chief in Libya said as much. Yet, Candy Crowley’s contrary claims notwithstanding, the president and his spokesmen concocted a fairy tale about an Internet video that “insulted the prophet” and a demonstration that got out of hand. This narrative was peddled most prominently by Susan Rice, but also by Secretary of State Clinton and the president himself.

White House e-mails released to Congress show that an interagency group, getting direction from the White House, altered the CIA’s talking points to remove references to al-Qaeda, jihadists, and to five previous attacks by terrorists on Western interests in Libya. Does anyone remember the phrase “politicizing intelligence”?

When Secretary Clinton testified before Congress on Benghazi (and ran circles around the questions), she referred repeatedly to the “ARB,” the accountability review board, to prove that her department had been blameless in failing to provide additional security to the consulate and in handling the aftermath. But that piece of the wall is now in danger of coming loose as well. State’s inspector general is investigating the ARB and may inquire as to why the secretary of state herself, among others, was never interviewed during its investigation.

Secretary Clinton’s demand “What difference does it make?” deserves a reply. The public deserves to know if the mistakes the administration made — conceptual, tactical, or both — contributed to the deaths of four Americans. The public also deserves to know whether the president and his agents audaciously and brazenly lied about a national-security matter for political gain.