Administration Knew Benghazi Was a Terrorist Attack ‘From the Get-Go’ 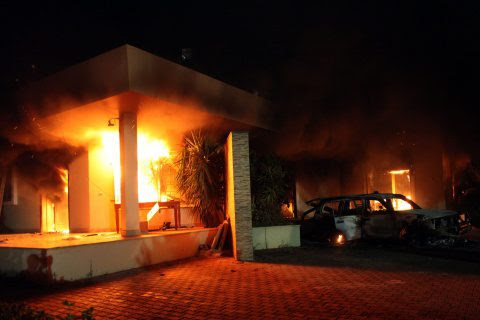 The number-two diplomat in Libya at the time of the terrorist attack on our diplomatic mission reportedly told a congressional committee that they knew that it was a terrorist attack “from the get-go.”

The statement of Thomas Hicks, former deputy chief of mission in Libya, directly contradicts the explanation offered by the administration in the immediate aftermath of the attack — that it was a “spontaneous” demonstration in response to a YouTube video on Islam.

Hicks, disillusioned and bitter, let the administration have it, reserving his harshest criticism for Ambassador Susan Rice, whose five interviews on Sunday talk shows not only spread altered talking points on the attack, but hugely damaged our relations with the new Libyan government.


When he appears this week before the committee, chaired by Rep. Darrell Issa, R-Calif., Hicks is expected to offer testimony at odds with what some American officials were saying in public – and on “Face the Nation” – just five days after the attack. Benghazi whistleblowers have rallied attention to discrepancies among the administration’s reaction to the attack, which The Weekly Standard suggests was frayed by ever-evolving talking points that sought to remove references to al Qaeda.

On Sept. 16, U.S. Ambassador to the United Nations Susan Rice hit the media circuit, appearing on all five Sunday talk shows to dispel the notion that the strike was a premeditated terrorist act and to perpetuate the case that it began “spontaneously” out of protests in Egypt. Rice’s spot on “Face the Nation” that day was preceded by the new President of Libya Mohammed al-Magariaf, who said his government had “no doubt that this was preplanned, predetermined.”
“For there to have been a demonstration on Chris Stevens’s front door and him not to have reported it is unbelievable,” he said. “I never reported a demonstration; I reported an attack on the consulate. Chris – Chris’s last report, if you want to say his final report – is, ‘Greg, we are under attack.’

“…I’ve never been as embarrassed in my life, in my career, as on that day,” Hicks continued in his interview with investigators. “The net impact of what has transpired is, [Rice,] the spokesperson of the most powerful country in the world, has basically said that the president of Libya is either a liar of doesn’t know what he’s talking about. ….My jaw hit the floor as I watched this.”

Though the White House has said it was in contact with officials in Libya the night of the attack, Hicks said in the days following, he was never consulted about the talking points. One day after Rice’s Sunday show blitz, Hicks said he called Beth Jones, acting assistant secretary for near eastern affairs at the State Department, and asked, “Why did Amb. Rice say that?” The tone of her answer – “I don’t know,” he said – indicated that “I perhaps asked a question that I should not have asked.”

Stephen Hayes at the Weekly Standard has pieced together the story of how and why the Benghazi talking points were altered. And, according to Hayes, it wasn’t only the talking points that were changed. He writes that “it is clear that senior administration officials engaged in a wholesale rewriting of intelligence assessments about Benghazi in order to mislead the public.”


The Weekly Standard sought comment from officials at the White House, the State Department, and the CIA, but received none by press time. Within hours of the initial attack on the U.S. facility, the State Department Operations Center sent out two alerts. The first, at 4:05 p.m. (all times are Eastern Daylight Time), indicated that the compound was under attack; the second, at 6:08 p.m., indicated that Ansar al Sharia, an al Qaeda-linked terrorist group operating in Libya, had claimed credit for the attack. According to the House report, these alerts were circulated widely inside the government, including at the highest levels. The fighting in Benghazi continued for another several hours, so top Obama administration officials were told even as the fighting was taking place that U.S. diplomats and intelligence operatives were likely being attacked by al Qaeda-affiliated terrorists. A cable sent the following day, September 12, by the CIA station chief in Libya, reported that eyewitnesses confirmed the participation of Islamic militants and made clear that U.S. facilities in Benghazi had come under terrorist attack. It was this fact, along with several others, that top Obama officials would work so hard to obscure.
[...]
The talking points were first distributed to officials in the interagency vetting process at 6:52 p.m. on Friday. Less than an hour later, at 7:39 p.m., an individual identified in the House report only as a “senior State Department official” responded to raise “serious concerns” about the draft. That official, whom The Weekly Standard has confirmed was State Department spokesman Victoria Nuland, worried that members of Congress would use the talking points to criticize the State Department for “not paying attention to Agency warnings.”

In an attempt to address those concerns, CIA officials cut all references to Ansar al Sharia and made minor tweaks. But in a follow-up email at 9:24 p.m., Nuland wrote that the problem remained and that her superiors—she did not say which ones—were unhappy. The changes, she wrote, did not “resolve all my issues or those of my building leadership,” and State Department leadership was contacting National Security Council officials directly. Moments later, according to the House report, “White House officials responded by stating that the State Department’s concerns would have to be taken into account.” One official—Ben Rhodes, The Weekly Standard is told, a top adviser to President Obama on national security and foreign policy—further advised the group that the issues would be resolved in a meeting of top administration officials the following morning at the White House.

Who is Ben Rhodes?

Ed Lasky at the American Thinker reminds us that the appointment of Rhodes — a failed novelist — to a position on the National Security Council was a shocker:


He earned a master’s degree in fiction-writing from New York University just a few years ago . He did not have a degree in government, diplomacy, national security; nor has he served in the CIA, or the military. He was toiling away not that long ago on a novel called ‘The Oasis of Love” about a mega church in Houston, a dog track, and a failed romance.

Carol Lee of Politico wrote  in May, 2009, that
Not long ago, Rhodes was one of the obscure guys who wrote Obama’s campaign speeches in Starbucks and played video games into the early morning hours. Now he attends national security meetings and takes writer’s refuge in a secret office on the third floor of the Eisenhower Executive Office Building.

In such hands has our national security been entrusted.

Issa wants to get to the bottom of the talking-points controversy, and it appears some administration officials like Hicks are ready to finally go on the record. And when a full accounting of the lies, misleading statements, and stonewalling is given, one wonders how it will be possible for the phalanx of Obama sycophants in the press to salvage the president’s credibility.