By Charles Krauthammer, Published: May 9 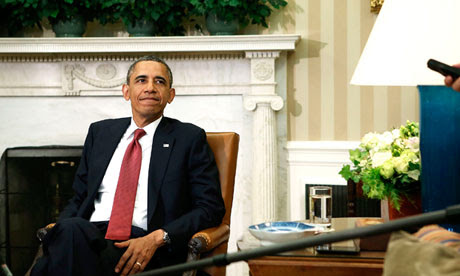 You know you’re in trouble when you can’t even get your walk-back story straight. Stung by the worldwide derision that met President Obama’s fudging and fumbling of his chemical-weapons red line in Syria, the White House leaked to the New York Times that Obama’s initial statement had been unprepared, unscripted and therefore unserious.

The next day Jay Carney said precisely the opposite: “Red line” was intended and deliberate.

Which is it? Who knows? Perhaps Obama used the term last August to look tough, sound like a real world leader, never expecting that Syria would do something so crazy. He would have it both ways: sound decisive but never have to deliver.

Or perhaps he thought that Syria might actually use chemical weapons one day, at which point he would think of something.

So far he’s thought of nothing. Instead he’s backed himself into a corner: Be forced into a war he is firmly resolved to avoid, or lose credibility, which for a superpower on whose word relies the safety of a dozen allies is not just embarrassing but dangerous.

In his recent rambling news conference, Obama said that he needed certainty about the crossing of the red line to keep the “international community” behind him. This is absurd. The “international community” is a fiction, especially in Syria. Russia, Iran and Hezbollah are calling the shots.
Nor, he averred, could he act until he could be sure of everything down to the “chain of custody” of the sarin gas.

What is this? “CSI: Damascus”? It’s a savage civil war. The antagonists don’t exactly stand down for forensic sampling.

Some countries have real red lines. Israel has no friends on either side of this regional Sunni-Shiite conflict, but it will not permit the alteration of its strategic military balance with Hezbollah, which is already brimming with 60,000 rockets aimed at Israel.

Everyone in the region knows that the transfer of chemical weapons to Hezbollah or the acquisition of the Fateh-110 missile, with the accuracy and range to hit the heart of Tel Aviv, is a red line. Hence the punishing Israeli airstrikes around Damascus on advanced weaponry making its way to Hezbollah.

The risk to Israel is less a counterattack from Damascus than from Hezbollah. Bashar al-Assad of Syria doesn’t need a new front with Israel. Syria remembers not just its thorough defeat at the hands of Israel in 1967 and 1973 but also its humiliation in the skies over the Bekaa Valley in 1982 when it challenged Israeli air dominance. In a two-day dogfight, Israel shot down 60 Syrian planes and lost none.

Israel’s real concern is a Hezbollah attack. But Hezbollah has already stretched itself thin by sending fighters into Syria to save Assad. And it knows that war with Prime Minister Benjamin Netanyahu would be far more devastating than its 2006 war with the tepid and tentative Ehud Olmert.

Most important, Iran, Hezbollah’s master, wants to keep Hezbollah’s missile arsenal intact and in reserve for retaliation against — and thus deterrence of — a possible Israeli attack on Iran’s nuclear program.

These are complicated, inherently risky calculations. But living in the midst of this cauldron, Israel has no choice. It must act.

America does have a choice. It can afford to stay out. And at this late date, it probably will.
Early in the war, before the rise of the jihadists to dominance within the Syrian opposition, intervention might have brought down Assad and produced a decent successor government friendly to America and non-belligerent to its neighbors.

Today our only hope seems to be supporting and arming Salim Idriss, the one rebel commander who speaks in moderate, tolerant tones. But he could easily turn, or could be overwhelmed by the jihadists. As they say in the Middle East, you don’t buy allies here. It’s strictly a rental.

Israel’s successful strikes around Damascus show that a Western no-fly zone would not require a massive Libyan-style campaign to take out all Syrian air defenses. Syrian helicopters and planes could be grounded more simply with attacks on runways, depots and idle aircraft alone, carried out, if not by fighters, by cruise missiles and other standoff weaponry.

But even that may be too much for a president who has assured his country that the tide of war is receding. At this late date, supporting proxies may be the only reasonable option left. It’s perversely self-vindicating. Wait long enough, and all other options disappear. As do red lines.

Read more on this issue: Fareed Zakaria: U.S. credibility is not on the line in Syria Anne-Marie Slaughter: What Obama should keep in mind as he weighs action in Syria Eugene Robinson: Questioning intervention in Syria Richard Cohen: Obama out of line