But his words resonate with audiences full of varied, complex agendas 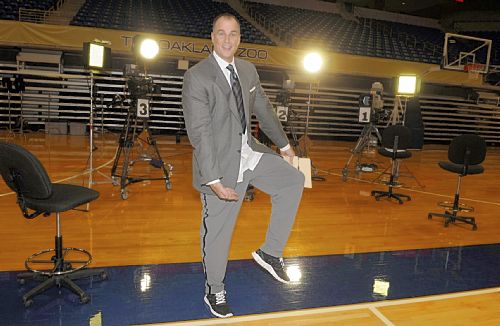 ESPN College GameDay basketball analyst Jay Bilas, dressed for the waist up on camera shots, goofs around on a partially broken-down set Friday, a day before the show goes live. The show travels around the country to a new destination each week, and Saturday's show featured the Pitt vs. Louisville matchup at Petersen Events Center. (Bill Wade/Post-Gazette)


Jay Bilas' parents schooled him to embrace opportunity, so, when officials at Duke nominated him to sit on the NCAA's long-range planning committee as an undergraduate in the early 1980s, Bilas said yes.

Then a 20-year-old standing 6 feet 8 with a full head of brown hair, Bilas was the starting center on Duke's basketball team and had not met much resistance in life. He was a Southern Californian with a quick wit, and, in the Blue Devils' locker room, there was a feeling that Bilas could do just about anything he wanted.

But Bilas ran into a wall in those meetings with the NCAA. He had ideas about how to improve the life of a college athlete, but it felt like nobody in that room was listening.

One time, Bilas had brought up a grievance about NCAA transfer rules. For instance, if a head coach was fired or left for another job, Bilas did not feel the coach's players should have to sit out a year if they were to transfer from the school.

"You would have thought I said every athlete should be paid a million dollars," Bilas recalled.

He was told that an athlete's commitment was "a marriage between player and school," but Bilas pleaded his case.

"When I got to campus," Bilas said, "I was picked up by the coach. I was shown the university through the eyes of the coach.

"I understand the marriage analogy, but, if I were to get divorced, that doesn't mean I have to stay and live with my wife's parents after she leaves me."

Thing is, Bilas was not saying half of what he felt. He understood that it would have been a futile exercise to tell the committee that players should be compensated for the money they bring into universities.

When Bilas left the NCAA committee, he was discouraged, but he has spent much of the past three decades acquiring experiences that have combined to make him one of the most powerful voices in college athletics.

His platform as an ESPN college basketball analyst is big enough on some nights that he can be heard by millions, and Bilas does not want to abuse that power.

He is meticulous in his preparation and fearless in saying what he thinks about any topic -- a refreshing quality in a world where talking heads just keep talking louder and louder.

Bilas rarely turns up the volume, and his words hold more weight among fans with each passing year. In 2010, Sports Illustrated named Bilas college basketball's best game analyst. His Twitter page has 227,000 followers.

All day Saturday, it was Bilas' job to prepare the nation for the Pitt-Louisville game at the Petersen Events Center on ESPN College GameDay. It is a role he relishes because it keeps him on the inside with the coaches and the players -- the scene he gave up in 1992 when he took a job as an attorney at a large, corporate Charlotte firm.

"I look at myself as a basketball guy, and this is my avenue."

If Bilas could cut off his brain from everything else and just think about basketball, his life certainly would be simpler. He would love to do nothing but sit around and diagram plays as he did at one point Friday afternoon, but Bilas cannot shake the big picture.

Friday night, he settled into a booth in a seafood restaurant at the Westin Convention Center and relaxed with a glass of pinot noir. Saturday morning, he would take his place in the machine, promoting a sport that brings in billions for the NCAA and pays the organization's president $2 million a year.

Bilas and the crew will talk glowingly about Pitt's Ashton Gibbs and Tray Woodall, whose skills on the court make lots of other people money.

"We cover them like pros," Bilas said, "and they're not pros. But they should be pros."

Bilas said it would be a lot easier for him to be an NBA analyst.

"Only 30 teams," Bilas said, "and everybody is getting paid; nobody's got amateurism violations."

But Bilas said he would never cover another sport, no matter the money someone offered him. He is a basketball guy, after all. And, while he is living very comfortably off the game with his wife and two kids, he is willing to go with less if the right decisions are made.

"It's way better for me if they don't get a nickel. But I don't think it's right."

Bilas is a noted NCAA critic, and, for those on his side, they could not have a more well-rounded guy leading the charge. He has a Duke law degree, litigated cases for seven years before going into broadcasting full time and is a card-carrying member of the Screen Actors Guild. In 1990, Bilas played an alien cop in "Dark Angel," a movie starring Dolph Lundgren, the actor who played Russian boxer Ivan Drago in "Rocky IV."

Trying cases taught him how to argue a point without losing his cool, and acting made him unafraid of the spotlight.

"He's very talented," said Harvard coach Tommy Amaker, Bilas' teammate at Duke and a lifelong friend. "He can talk in different languages to a lot of different people."

Last summer, ESPN aired a show called "College Football: Blueprint For Change," which featured a roundtable of important voices. Bilas was the only person with no affiliation to football who was invited to join the panel.

Surrounded mostly by skeptical ears, Bilas described his plan to fix college athletics: an Olympic model in which players are not paid directly by their schools but can benefit from outside sources using their name or likeness.

"A music student who's on a full music scholarship can cut a record," Bilas said that day, "can play at Carnegie Hall, can be on TV, can be in a movie, whatever they want. Regular students get paid all the time."

At one point, Alabama coach Nick Saban, who makes more than $4 million a year, said "It's not a business. ... Nobody's really making money. I mean, we get paid salaries."

ESPN analyst Rece Davis recalls Urban Meyer leaning over to him as Bilas was speaking and saying, "I don't really agree with anything he's saying, but, boy, he's got a heck of a way of making you think he's right."

When reminded of Meyer's comment, Bilas said, "That's what my wife calls 'that lawyer [BS].' "

It may not work on Wendy Bilas, but the people at NCAA headquarters in Indianapolis are beginning to pay attention.

Last fall, Bilas got a call from NCAA president Mark Emmert, asking if he could spend some time with Bilas talking about the issues his organization faces. Bilas gladly agreed and welcomed Emmert and two other officials to his country club in Charlotte for lunch and a round of golf.

"I didn't expect anything to come out of it," Bilas said. "It was a wonderful opportunity for me.

"He doesn't have to talk to me or acknowledge me."

Just like when he was a student nearly 30 years ago, Bilas always will say yes to an opportunity -- especially one for discourse. He is open to being convinced that he is wrong about the future of college sports. It just has not happened.