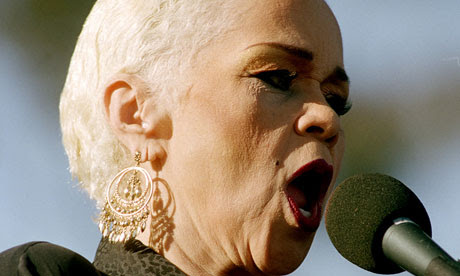 Soul legend … Etta James. Photograph: Eamonn Mccabe
Etta James was born in Los Angeles and spent some of the key years of her professional life in San Francisco and Chicago, but there have been few more convincing interpreters of soul music associated with the southern states. Many of her classics were indeed cut in Muscle Shoals and Memphis, but it didn't really matter where she was standing at the time. In LA or the Windy City, Etta could dig out the heart of a good song and present it raw, with the blood still running red. So this list of 10 personal favourite Etta James tracks contains a preponderance of deep-soul ballads with a southern accent.

Co-written by Billy Sherrill, produced by Rick Hall at the Fame studios in Muscle Shoals, this is a piece of prime late-60s Memphis soul: a black singer taking a country song and turning it inside out. Etta meets a man at a party, and they take a shine to each other. They drink and talk. He puts his hand on hers. Come away with me, he says. Then she looks into his soft brown eyes, and sees the reflection of her wedding ring. "I was almost persuaded …" One of her finest 45s.

Another country song taken for a walk through the shadows on the other side of town. This one is by Barbara Wyrick and Steve Bogard, and comes from the album Seven Year Itch, its title referring to her prolonged absence from the recording scene. Produced by Barry Beckett in Muscle Shoals, it features Reggie Young's guitar. Etta could shout the blues with the best of them, but she could also under-sing when necessary, and she pitches this one perfectly. Impossible to play just once.

A playful slice of pre-Beatles black pop, co-written (with Roquel Davis) by Tony Clark, a Northern Soul hero ("Ain't Love Good Ain't Love Proud", "Landslide", "The Entertainer"). "Pushover" itself was an early favourite with that audience, and demonstrates Etta's versatility.

In her 1995 autobiography, Rage to Survive, Etta wrote that she heard an early version of this song from its writer, her friend Ellington Jordan, before helping him to complete it. Recorded with Rick Hall at FAME, it ended up on the B-side of "Tell Mama". A year later Christine Perfect sang it with Fleetwood Mac, paving the way for countless cover versions. The original is still the greatest, by a country mile.

Bob Montgomery, Buddy Holly's songwriting partner, wrote this yearning ballad in 1966 for Brenda Lee, who wasn't interested. Ten years later Dorothy Moore gave it the soul treatment and had a huge worldwide hit. This heartfelt version comes from The Dreamer, Etta's final album, sensitively produced by her sons Donto and Sametto – long a part of her road band, on drums and bass respectively – to minimise the limitations of a voice losing its range and flexibility but none of its intelligence and interpretive power. "Listen to me good," she urges.

After her initial run of hits dried up, Etta signed with the Chess brothers in Chicago. This wailing duet with Harvey Fuqua takes its place in a tradition running from Brook Benton and Dinah Washington to Marvin Gaye and Tammi Terrell.

Tom Jans was a folk singer from southern California who toured and recorded with Mimi Farina, Joan Baez's sister, and died of an overdose in 1984, aged 35, a year after a serious motorbike crash. He left this wonderful song, which exists in powerful versions by Elvis Presley and Millie Jackson but also drew the best out of Etta, even though she insists on changing "Looking back and longing for the freedom of my chains" – the key line – to "Looking back and hoping for the freedom of my chains".

Written by Dan Penn and Spooner Oldham, in the grand tradition of their majestic country-soul ballads ("Out of Left Field", "Dark End of the Street" and so on). Produced by Rick Hall and released as the B-side of Etta's cover of Sonny and Cher's "I Got You, Babe".

Another track from The Dreamer, this stately and perfectly understated version of the old Ray Charles song goes deep into Etta's heritage, with an excellent band purring through the altered 12-bar changes as she meditates on the most basic verities of the blues: in the evening, when the sun goes down, and your good lover is not around … No more to be said.
Posted by jtf at 10:21 AM