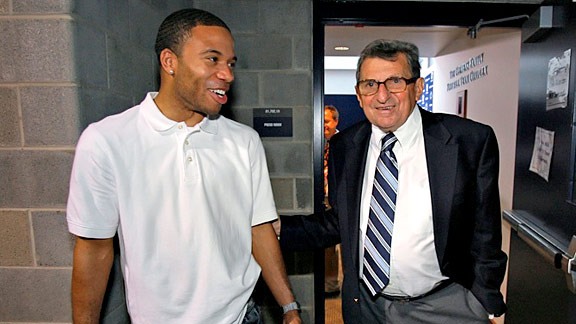 Adam Taliaferro and Joe Paterno in 2010, 10 years after the player and coach had formed a strong bond in the wake of Taliaferro's horrifying spinal cord injury. (Joe Hermitt/The Patriot-News)

Maybe you will never be convinced Joe Paterno was a good man who made one catastrophic mistake, but do you have time for just one story?

In 2000, Penn State freshman defensive back Adam Taliaferro had his spine crushed when tackling an Ohio State player. He lay on that September field paralyzed and panicked.

The first person he saw when he opened his eyes was Paterno, who died Sunday at 85.

"He could see I was losing it, but his eyes stayed totally calm," Taliaferro remembers. "And I remember that familiar, high-pitched voice, going, 'You're gonna get through this, Kid. You're gonna be OK.' And I just trusted him. I believed it."

Taliaferro wound up in a hospital bed in Philadelphia, everything frozen solid below the neck. Doctors said he had about a 3 percent chance of walking again. And every other week, Paterno would fly to Philly to see him.

"He'd bring our trainer and a couple of my teammates," Taliaferro says. "Nobody in the hospital knew he was there." Paterno would tell him all the dumb things his teammates and coaches had done lately. Pretty soon, Taliaferro would be laughing his IVs out.

"I can't tell you what that meant to me," says Taliaferro, now 30. "I'm stuck in that hospital, and here's Coach Paterno bringing a piece of the team to me, in the middle of the season. How many coaches would do that?"

One midnight, Taliaferro moved a toe and the first person his dad called was Paterno. His dad held the phone to Adam's ear and Paterno said, "You're gonna prove 'em all wrong, Kid!"

From then on, every visit, Paterno wanted to see Taliaferro move something new. "I got to where I wanted to be ready. A finger, a hand, whatever. I wanted to perform for Coach Paterno."

One day, five months into it, Paterno walked in and said, "What's new, Kid?" Taliaferro swung his legs over the bed, stood and extended his hand to shake.

"I'll never forget his eyes," he says. "They were already huge behind those Coke-bottle glasses, but they got even bigger." Paterno gave him a 10-second hug and then said, "Kid, ya make me proud."

A man is more than his failings.

I learned a lot about Paterno when I wrote a story about him in 1986 for Sports Illustrated. I've learned a lot about him since. He was a humble, funny and giving man who was unlike any other coach I ever met in college football. He rolled up his pants to save on dry cleaning bills. He lived in the same simple ranch house for the last 45 years. Same glasses, same wife, same job, for most of his adult life.

He was a man who had two national championships, five undefeated seasons, and yet for years he drove a white Ford Tempo. In 46 years as a head coach, he never had a single major NCAA violation.

He was the only coach I've ever known who went to the board of trustees to demand they increase entrance requirements, who went to faculty club meetings to hear the lectures, who listened to opera while drawing up game plans.

He was a Depression kid who wouldn't allow stars on helmets or names on jerseys. And he hated expensive tennis shoes.

He'd see a player wearing Air Jordans and say, "It's not the sneakers, Kid, it's the person in them."

One day Taliaferro wore an entirely different pair into his office, a pair of "Air Paternos" he'd made himself. "He freaked out," Taliaferro remembers. "He was about to call Nike. He thought they were real!"

If a player was struggling with a subject, Paterno would make him come to his house for wife Sue's homemade pasta and her tutoring. One time, he told a high school blue chipper named Bob White he wouldn't recruit him unless he agreed to read 12 novels and turn in two-page book reports to Sue. They were the first books he ever finished. White wound up with two degrees and a job at the university.

Paterno was other things, too, like controlling and immovable. He lingered as head coach when he promised time and again he wouldn't. And when he needed to follow up on what he'd been told about Jerry Sandusky and a child in the shower in 2002, he failed miserably.

But he followed up for thousands of others.

Even though Taliaferro would never play football again, Paterno stayed on him to keep moving. "I came to Penn State to become a lawyer," he told him. "But I never made it. You could, Kid. You're smart."

He got the fully recovered Taliaferro a summer internship with the NFLPA in New York and, before you knew it, Taliaferro was a corporate lawyer in Cherry Hill, N.J. He successfully ran for local office there and is now running for the Penn State board of trustees, where he wants to help his school heal from a scandal Paterno made worse with his neglect.

"The last three months, I've just wanted to go up on a rooftop and shout, 'I wish you knew him like I do!'" Taliaferro says. "I know, in my heart, if he'd understood how serious this situation was, he'd have done more."

I believe that, too. But if you don't, I respect that. I only ask this:

Rick Reilly is the 11-time National Sportswriter of the Year. He contributes essays and commentary to "Monday Night Countdown," "SportsCenter," and ESPN/ABC golf and tennis coverage. He's also the host of "Homecoming," ESPN's unique, one-hour interview show set in the hometowns of legendary athletes. For more Rick, check out the archive.

Feel like taking a detour from sane sports? Try Rick's latest book, "Sports from Hell."
Posted by jtf at 9:51 AM