For Paterno, Lover of Classics, Tragic Flaw to a Legacy 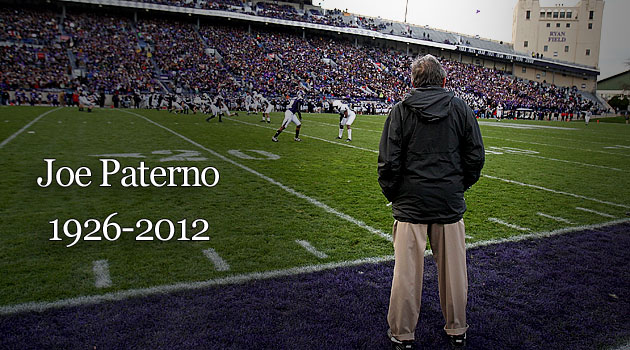 Joe Paterno loved the classics. He quoted Shakespeare to his team, devoured the poems of Virgil and donated his money to help save Penn State’s classics department, even endowing a scholarship in the name of his high school Latin teacher, the Rev. Thomas Bermingham.

With Paterno’s death at 85 from lung cancer on Sunday morning, the final thread of his narrative is one fit for the literary tragedies he adored.

Paterno arrived at Penn State in 1950, and did more than any one person to help the university transform athletically and academically over the ensuing decades, but his final legacy will be indelibly stained by not doing enough.

“With the benefit of hindsight, I wish I had done more,” Paterno said in regard to fulfilling his legal obligation, but not his moral one, when informed that the former defensive coordinator Jerry Sandusky was suspected of sexually assaulting a boy in the shower of the Penn State football facility — one of a number of allegations of abuse levied against Sandusky in a grand jury report.

Classic literature is filled with stories that focus on the tragic hero, cautionary tales of fatal flaws and mistakes. And Paterno’s failure to alert police of Sandusky’s suspected actions in 2002 ultimately ended his coaching career and added a shocking controversy to a legacy that had been stunningly uncomplicated.

“I think this last tragic series of incidents probably took his will to live,” said Larry Foster, a friend of Paterno and his family for 60 years. “It probably bore down on him because it was so opposite to what he was used to. When he made the decision of handling it the way that he did, I think he felt like he was doing the right thing. And it turned out to be the wrong thing. His words, ‘I should have done more,’ I think I’ll keep in my memory.”

What Paterno did on the football field may be unmatched. He won 409 games in his 46 seasons as a head coach, led 5 undefeated teams and 23 times guided Penn State to a top-10 finish. He did so in his own uncompromising style, demanding that his players go to class and achieving consistently high graduation rates long before the N.C.A.A. essentially forced universities to make sure their athletes were being led toward receiving their degrees.

Paterno’s effect on the campus was also outsize. A wing of the library is named for Paterno and his wife, Sue, and he helped Penn State transition from a being a state-centered university with 9,500 students to a booming, internationally renowned institution with nearly 45,000 students. The influence Paterno had on Penn State on and off the field is so vast that it is almost unquantifiable. It is hard to think of the university without picturing Paterno’s dark glasses, unadorned black coaching shoes and khaki pants rolled up over white socks.

The breadth of Paterno’s accomplishments makes it seem even more tragic that he was fired from Penn State while wishing he had done more. Paul B. Harvey Jr., the head of the university’s classics and ancient Mediterranean studies department, said that Paterno helped raise more than $150,000, some of it his own money, for his department over the years, essentially saving it from extinction.

Harvey saw his department grow in direct relation to the support provided by Paterno, who would tell friends looking to donate to the athletic department to give money to Harvey’s department instead. When asked about Paterno’s legacy Sunday, Harvey let out a long sigh. “Boy, that’s the magic question isn’t it?” he said.

Ultimately, Harvey determined that Paterno’s stature on campus would endure longer than his role in the Sandusky scandal.

“I know quite a few of us hoped that he would continue coaching forever,” Harvey said. “Not because his direction of the football team was perfect. But rather, Joe had a standard of academic excellence that he wanted his students to strive for. I don’t see that in too many other universities or college football programs.”

Bobby Bowden, the former Florida State coach, often said half-jokingly at banquets and booster functions that he was not looking to retire because after that, there was only one big event left in life.

In a phone interview Sunday, Bowden pointed out that the legendary Alabama coach Bear Bryant died a few weeks after he retired and wondered how Paterno dealt with all the emotion and controversy that surrounded his departure.

“You just have to think that something like this hastens death,” Bowden said. He added of Paterno: “He did it the right way. He graduated his players and ran a real good program. He donated to his university. He’s the perfect example. Then this thing occurs. I just don’t know how he dealt with it.”

Paterno was not perfect. His players, especially for a stretch in the last decade, had too many brushes with the law. E-mails emerged in the wake of the Sandusky scandal that showed how Paterno attempted to bully and manipulate administrators. He had a short temper, cursed frequently and remained the team’s coach for far too long. In his final few years, he had little effect on the day-to-day machinations of the program. Paterno did not work nearly as hard at recruiting as many of his competitors, especially in his later years, but Penn State administrators, knowing what he had accomplished and built, swallowed hard and settled for having a living icon on the sideline.

Considering the scope and success of his career, however, especially amid the ethical morass that is modern college sports, Paterno was the consummate example of how to handle the tricky duality of athletic success and academic integrity.

In the end, Paterno leaves a portrait of contrasts. He was a coach fired by the board of trustees, the same board that now wants to honor him. He was an academic respected on his own campus in an era when the separation between faculty and athletics has never been greater.

Ultimately, Joe Paterno, after decades of what had appeared to be the most straightforward and laudable of careers, leaves a complicated legacy, an epic tragedy seemingly penned by one of the writers whom Paterno himself so adored.
Posted by jtf at 9:26 AM