Requiem for the soul of Penn State 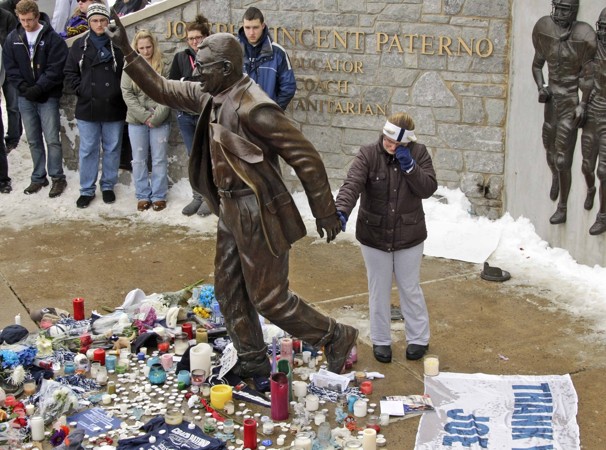 A woman pays her respects at a statue of Joe Paterno outside Beaver Stadium on the Penn State University campus in State College, Pa. (Gene J. Puskar/AP)

When time does what it does, and the full measure is taken, Joe Paterno’s legacy will be a fine and remarkable thing. It will be very close to what the great man hoped and dreamed during his decades as a college professor whose discipline happened to be football.

Paterno was a winner, on the field and in almost every area that mattered.

He was not perfect, which was true before the terrible Jerry Sandusky story broke. That dreadful scandal may have robbed Paterno of the appropriate end to his coaching career, and almost certainly sped up the end of his life, but it will not ultimately rob him of his reputation. That was built carefully, brick by brick, over decades of hard work, uncommon decency and unyielding integrity. It is a sound structure that was rocked, but not destroyed, by the hurricane that has blown through State College since November.

Death and mercy came to Joseph Vincent Paterno Sunday. Surrounded by his beloved wife Sue and their family, the coach was carried off on the phantom shoulders of the hundreds, even thousands, of young men whose lives he enriched over six decades at Penn State.

Death comes to us all. It is mercy when it eases pain too great to bear. For Paterno, the pain of what transpired over the past few months was surely as great as the cancer that officially claimed him. He is free from that pain now.

There was pain over the loss of his job, of course, and over the inability to leave it on his own terms after such a long and stellar career.

But his deepest pain was for the university to which Paterno devoted his life. To say he was the Nittany Lions football coach would be to say Steve Jobs worked in computers, or that Walt Disney was a cartoonist. The man was larger than the university where he worked, than the sport that he coached.

That was both his greatest achievement and, in the end, part of his downfall. If you appreciated Paterno for assuming his position as a much needed conscience of college sports, and for his singular status as the most important man in Happy Valley, then you had to be disappointed by his failure to meet his own standards when confronted with Sandusky’s heinous alleged behavior.

This is not a contradiction. Indeed, you got the distinct impression that Paterno was disappointed in himself. He said in an early statement that he wished he had “done more.” His interview with Sally Jenkins of the Washington Post last week – which turns out to be his final say on the matter – was tinged with sadness and with regret. If you cared about Paterno, if you believed in him, you detected sorrow in every word.

This is the third and final time Sandusky’s name will appear in this column. It is unfortunate that his name is linked with Paterno’s at all. There is no getting around the connection – not after the breathtaking sequence that began with the release of the grand jury report, the dismissal of Paterno, the housecleaning in the PSU administration, the revelation that Paterno had lung cancer and now, with shocking finality, his death.

For decades, Paterno made time stand still in State College. His team dressed and (sometimes to its disadvantage) played as if the calendar still said 1965. Paterno conducted himself like a courtly gentleman of some previous era. He wore the same thick glasses, sported the same thick black hair, ran onto the field in the same high-water khakis.

Nothing ever changed. And then everything did. Suddenly, cruelly.

It is possible to believe that Paterno could not continue representing Penn State as its head coach and also believe that he’d done so with great distinction for an incredibly long time.

It is possible to believe he should have done more when confronted with real evil and also believe that he was a good and decent and admirable human being.

It is impossible to turn back time and give everyone involved a do-over. Joe Paterno, the man, is gone now. It is sadly true that much of what he believed in and represented was already gone from college sports and society at large. But quite a bit of what remains does so because he instilled it in lives he influenced directly and indirectly, in former players and Penn State alums and those who admired him and his teams from afar.

Joe Paterno was a force for good for most of a long and wonderful life. When the full measure is taken, that will outweigh the terrible events of these last few months.

Penn State already has hired a new football coach. It will never have another soul. That was Paterno. That is Paterno. Time will take care of the rest.