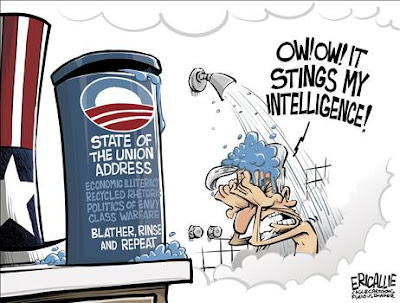 Once upon a time, small ball was not Barack Obama’s game. Tuesday, it was the essence of his State of the Union address. The visionary of 2008 — purveyor of hope and change, healer of the earth, tamer of the rising seas — offered an hour of little things: tax-code tweaks to encourage this or that kind of behavior (manufacturing being the flavor of the day), little watchdog agencies to round up Wall Street miscreants and Chinese DVD pirates, even a presidential demand “that all students stay in high school until they graduate or turn 18.” Under penalty of what? Jail? The self-proclaimed transformer of America is now playing truant officer?

It sounded like the Clinton years with their presidentially proclaimed initiatives on midnight basketball and school uniforms. These are the marks of a shrunken presidency, thoroughly flummoxed by high unemployment, economic stagnation, crushing debt — and a glaring absence of ideas.

Of course, this being Obama, there was a reach for grandeur. Hope and change are long gone. It’s now equality and fairness.

That certainly is a large idea. Lenin and Mao went pretty far with it. As did Clement Attlee and his social-democratic counterparts in postwar Europe. Where does Obama take it? Back to the decade-old Democratic obsession with the Bush tax cuts, the crusade for a tax hike of all of 4.6 points for 2 percent of households — 10 years of which wouldn’t cover the cost of Obama’s 2009 stimulus alone.

Which is why Obama introduced a shiny new twist — the Buffett Rule, a minimum 30 percent rate for millionaires. Sounds novel. But it’s a tired replay of the alternative minimum tax, originally created in 1969 to bring to heel all of 155 underpaying fat cats. Following the fate of other such do-goodism, the AMT then metastasized into a $40 billion monster that today entraps millions of middle-class taxpayers.

There isn’t even a pretense that the Buffett Rule will do anything for economic growth or job creation (other than provide lucrative work for the sharp tax lawyers who will be gaming the new system for the very same rich). Which should not surprise. Back in 2008, Obama was asked if he would still support raising the capital-gains tax rate (the intended effect of the Buffett Rule) if this would decrease government revenue.

Obama said yes. In the name of fairness.

This is redistribution for its own sake — the cost be damned. It took Indiana Gov. Mitch Daniels about 30 seconds of his State of the Union rebuttal to demolish that idea. To get the rich to contribute more, explained Daniels, you don’t raise tax rates. This ultimately retards economic growth for all. You (a) eliminate loopholes from which the rich benefit disproportionately (tax reform) and (b) means-test entitlements so that the benefits go to those most in need.

After all, what’s he got? Can’t run on his record. Barely even mentioned Obamacare or the stimulus, his major legislative achievements, on Tuesday night. Too unpopular. His platform is fairness, wrapped around a plethora of little things, one mini-industrial policy after another — the conceit nicely encapsulated by his proclamation that “I will not cede the wind or solar or battery industry to China or to Germany.” As if he can command these industries into existence. As if Washington funding a thousand Solyndras will make solar economically viable.

Soviet central planners mandated quotas for steel production, regardless of demand. Obama’s industrial policy is a bit more subtle. Tax breaks for manufacturing — but double tax breaks for high-tech manufacturing, which for some reason is considered more virtuous, despite the fact that high tech is less likely to create blue-collar jobs. Its main job creation will be for legions of lawyers and linguists testifying before some new adjudicating bureaucracy that the Acme Umbrella Factory meets its exquisitely drawn criteria for “high tech.”

What Obama offered the nation Tuesday night was a pudding without a theme: a jumble of disconnected initiatives, a gaggle of intrusive new agencies and a whole new generation of loopholes to further corrupt a tax code that screams out for reform.

If the Republicans can’t beat that in November, they should try another line of work.

letters@charleskrauthammer.com
Posted by jtf at 6:02 AM