Despite knowing the Hamas ties of Kifah Mustapha, the FBI gave him a guided tour of a top-secret counterterrorism center and access to classified investigative techniques. 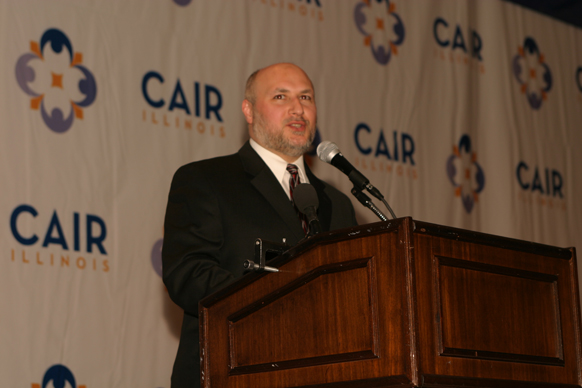 Mustapha’s long association with terrorist group Hamas occurred at virtually the same time that Mustapha was admitted into the FBI Citizens’ Academy sponsored by SAC Grant’s Chicago office. The Academy program required a background check and included a guided tour of the top-secret National Counterterrorism Center (NCTC) and the FBI Academy at Quantico.

The statements made by SAC Grant were noted in a motion for a protective order filed with the court and noted in a report published by the Investigative Project. The DOJ’s motion states:


In each conversation, SAC Grant stated that Mustapha would not pass an FBI background check if he applied for an FBI chaplain position and then proceeded to explain the bases for his opinion.

The DOJ motion is in response to the lawsuit filed by Mustapha after his state police appointment as Muslim chaplain was revoked. Mustapha had initially been accepted as state police chaplain, but after a news story aired reporting Mustapha’s terrorist connections and terror support, the state police conducted another background check. During this check was apparently when the conversations with SAC Grant took place, which resulted in the state police revoking Mustapha’s appointment.
Mustapha then sued, claiming ethnic and religious discrimination, with his case being supported by the Council on American-Islamic Relations (CAIR), which has also been identified by the FBI as a terrorist front for Hamas.

The FBI, which is not a party to the lawsuit, is seeking to protect the information they shared with the state police on Mustapha, claiming it would reveal sources and collection methods.

There’s not much mystery as to why SAC Grant would tell the Illinois State Police that Kifah Mustapha couldn’t pass an FBI background check. Mustapha is a known Hamas operative, including his prior employment with the Holy Land Foundation, which was listed as a specially designated terrorist group by the U.S. government in December 2001, and whose executives were convicted of terrorism support for Hamas in 2008 and sentenced to lengthy prison terms. Mustapha was personally named by federal prosecutors as an unindicted co-conspirator (#31) in the case, and employment records submitted during the trial showed that he received more than $154,000 for his work with the Holy Land Foundation between 1996 and 2000.

Also during the trial, FBI Special Agent Lara Burns testified that Mustapha sang in a band sponsored by the Holy Land Foundation that regularly featured songs dedicated to killing Jews and glorifying Hamas.

In a deposition he gave in a civil trial concerned with the murder of a Chicago teenager killed by Hamas while waiting for a bus in Israel, Mustapha admitted that he was the registered agent for the Holy Land Foundation in Illinois, and also to his involvement with other Hamas front groups, including the Islamic Association for Palestine. He was later hired as an imam by the Mosque Foundation in Bridgeview, which the Chicago Tribune noted in 2004 has long been a hotbed of Hamas support.

The Citizens’ Academy webpage on the FBI’s own website states:


Because of the classified investigative techniques discussed, nominees must also undergo a background check and get an interim security clearance.

In at least some of the FBI programs, each nominee must meet the approval of the special agent in charge. This glaring contradiction has been noted by Mustapha’s attorneys in his lawsuit against the state police, who have issued a subpoena to the FBI requesting all materials involving the FBI background check conducted for Mustapha’s admittance to the FBI Citizens’ Academy.

So how exactly did Kifah Mustapha with his extensive terror ties get cleared to participate in the six-week FBI program? That’s precisely the question I asked when I first broke the story last September about Mustapha being given a guided tour of the top-secret NCTC and the FBI Academy. After my initial story was published, one Homeland Security official contacted me informing me not only that “the plugs had to be pulled” in order for Mustapha to be admitted to the FBI program, but that “the NCTC has Kifah Mustapha on the highest watch list we have.”

Mustapha’s terrorist ties are hardly a secret since much of the information available publicly is from FBI agents testifying in court, court and deposition transcripts, and exhibits entered into evidence by federal prosecutors during the largest terrorism financing trial in American history.

But as soon as my report was published, the FBI began to double-down and defend Mustapha’s inclusion in the program. FBI Chicago spokesman Ross Rice told the Washington Times: “If we thought he was a security risk, we wouldn’t have included him.” But we now know from the DOJ’s filing in the lawsuit that SAC Grant thought Mustapha enough of a security threat to repeatedly mention it to his Illinois State Police colleagues.


“He’s a prominent figure in the community,” Bresson said, adding that the sheik has not been convicted of a crime. “It’s not like we gave him secret access or classified information.”

But the FBI did give him access to the top-secret NCTC, which even many Homeland Security and federal law enforcement officials are not able to enter and whose location is secret. And by its own admission posted on their own website, the FBI gives Citizens’ Academy participants access to “classified investigative techniques,” which is precisely their stated reason why they must first pass a background check and receive a limited security clearance.

After all, the FBI itself advertises its academies with the promise: “Want to find out first hand how the FBI works? Hear how the Bureau tracks down spies and terrorists?” No doubt, terrorist operatives like Kifah Mustapha are very interested in how the FBI conducts terrorist investigations, and in this case the FBI knowingly let at least one terrorist operative in on those secrets.

No wonder then that as soon as the media started asking questions, both FBI Director Robert Mueller and National Security Advisor James Clapper refused to address the issue just a few days after I broke the story.

Kifah Mustapha’s lawsuit and the admission by the DOJ about SAC Grant’s statements about Mustapha to the Illinois State Police, along with the FBI’s inclusion of Mustapha in their Citizens’ Academy program, expose the pure schizophrenia that characterizes the U.S. government’s “Muslim outreach” efforts. Time and again we see government agencies knowingly and willingly reaching out to terrorist operatives as official representatives of or interlocutors with the Muslim community (eg., Abdurahman Alamoudi, Anwar al-Awlaki, Louay Safi, et al).

But what we see in this most recent court filing is that what law enforcement and Homeland Security officials are willing to say in private to their colleagues about their “outreach partners” is the exact opposite of what they say when they repeatedly get caught in their own “outreach” traps and begin publicly defending terrorist operatives when asked about it by the media.

It is clearly time for Congress to get to the bottom of the U.S. government’s hopelessly failed and utterly counter-productive Muslim outreach programs that empower and legitimize terrorist operatives like Kifah Mustapha and expose other law enforcement agencies that are unwilling to participate in such duplicity to lawsuits by terrorist fronts masquerading as “civil rights organizations” such as CAIR. The FBI has established mutually exclusive positions on their outreach partner Kifah Mustapha and it is long past time that these agencies are held to account.


Patrick Poole is a regular contributor to Pajamas Media, and an anti-terrorism consultant to law enforcement and the military.
Posted by jtf at 7:38 AM